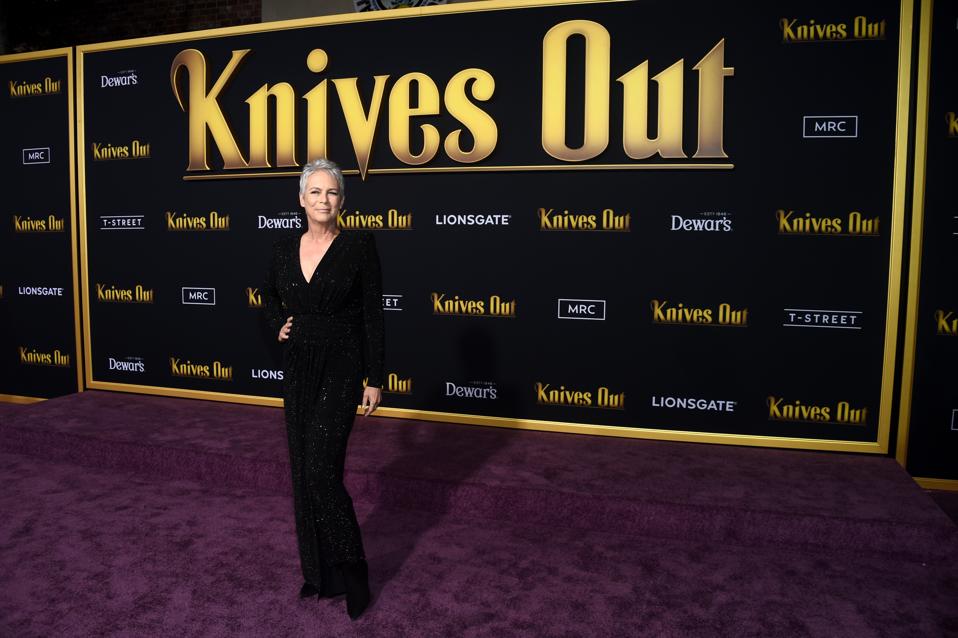 WESTWOOD, CALIFORNIA – NOVEMBER 14: Jamie Lee Curtis arrives at the premiere of Lionsgate’s “Knives … [+] Out” at the Regency Village Theatre on November 14, 2019 in Westwood, California. (Photo by Amanda Edwards/WireImage,)

One of the surprise hits of the 2019 movie season has been the murder mystery Knives Out. With a star-studded cast including Jamie Lee Curtis, Daniel Craig and Chris Evans, it’s an engaging movie event.  In fact, both moviegoers and critics are connecting with this fun whodunit that has brought in over $70 million dollars at the box office and a slew of award nominations.

But the crux of the story is a topic most Americans wouldn’t find exciting – the world of estate planning.  That is, unless the estate planning involves the wealthy.

(Spoiler Alert: If you want to avoid any spoilers, please don’t read further.)

In the movie, the patriarch of a wealthy family, Harlan Thrombey played by Christopher Plummer, is found dead. Just prior to his death, he changed his estate plan. While the movie navigates the twists and turns to determine exactly who might be responsible for his death, there are some key scenes that address estate planning concepts, including contesting a will, undue influence, and the slayer statute. These are issues moviegoers might want to understand in relation to their own estate plans.

One of the most dramatic scenes in the movie is the gathering of the Thrombey Family at their father’s estate to hear the reading of the will.   In a wood paneled library, the estate attorney sits behind the patriarch’s desk and reads the document. The importance of this scene is highlighted when Daniel Craig’s character explains that the will reading is really a performance of “a tax return by a community theater.”

But the filmmakers have taken liberties.

“One common misconception with the public is that there is a “reading of the will’,” says Paula Leibovitz Goodwin, partner in the Personal Planning Group at Perkins Coie in San Francisco, CA. “That does not happen in real life.”

While this is a pivotal scene in the movie, it should not be expected that when someone dies, this is how the process plays out.

Leibovitz admits people often find this surprising. “In the past there have been some that I have disappointed when I told them that there is no will reading in real life.”

But while the reading of the will is more fiction than fact, there are some elements that ring very true in the estate planning world. When things don’t go the right way for the Thrombey family in the patriarch’s estate plan, the family immediately considers contesting the will. But exactly how common is contesting a will?

“Contesting wills is becoming increasingly common,” says Christopher J. Burns, partner in Estate and Tax at Henson & Efron in Minneapolis, Minnesota. “The reason for this appears to be an increased willingness by individuals to challenge estate plans.”

This is due in part to increased longevity. Often estate plans haven’t been updated to address changes in the family.  In cases where the testator has dementia or is otherwise vulnerable,  there is a risk that they may be taken advantage of. The typical outcome when a will is contested is some form of settlement.

Undue Influence Is a Red Flag

One of the more common causes of action when a will is challenged is that of undue influence. In the movie, given that Marta the caretaker becomes the sole beneficiary under the will, this term gets thrown about quite early on by the Thrombey family when talking about the will contest.

“Undue influence is a legal concept that can be used to invalidate a will, trust, or legal instrument,” explains Caitlin Carey, an estate planning attorney in the Personal Planning Group at Perkins Coie.  “Undue influence occurs when a vulnerable individual is persuaded to change his or her estate plan, and the persuasion and influence rise to the level where the susceptible individual is unable to freely exercise his or her independent will.”

In the movie, the family accuses Marta of exercising undue influence on Harlan Thrombey. While it may seem harsh to the movie viewer to attack the caretaker, it’s a common fact pattern in undue influence and can be seen as a red flag.

Burns gives some insight on how Harlan probably should have handled the changes to his will. “Talking about money and your estate plan is challenging, particularly with children and other loved ones,” he says. “Nevertheless, I encourage clients to do so. Candid conversations have a good track record of eliminating will challenges.”

A Unique Cause of Action

When undue influence fails, the Thrombey family turns to the concept of the more dramatically named “slayer statute”. With this statute, an individual cannot inherit if they intentionally killed the deceased. While this concept might seem farfetched and created for the film, it is an actual premise in estate law.

Carey notes that the state in which the crime occurs determines what happens if a person is convicted. “Some states apply the rule only to those convicted of homicide, others apply it to manslaughter, with some allowing the “slayer’s” descendants to receive what the “slayer” would have inherited, and others cutting off the slayer’s family line.”

In the movie, the Thrombey family is apparently in a state in which the slayer’s family line would be cut off if Marta is convicted on Harlan’s murder.

Ultimately Knives Out gets a lot about estate planning right, from will contests to undue influence, to slayer statutes. Further, even the estate attorney’s reaction to the events is realistic, as he tells the family that this would be a very hard case to prove in court.

For estate attorneys watching the movie, there is another interesting element.  Burns took his 15-year-old son to see the film, noting that, “For a few minutes, the interesting family dynamics I get to deal with in my law practice were briefly more interesting to him than they had been previously, though that dissipated quickly.”

So, pass the popcorn and enjoy this fun education in the world of estate planning!

‘Best Buying Opportunity Of The Century’ For Corporate...