Turns out that “my relative” is on the dinner menu for some hammerhead sharks in Australia!

Known for their hammer-shaped head (cephalofoil), the largest of these animals in the Sphyrnidae family is the great hammerhead (Sphyrna mokarran), attaining a maximum length of 20 feet (6.1 meters). Found worldwide in tropical and warm temperate waters, they can be seen cruising in coastal areas and along the continental shelf. A solitary predator, they primarily feed on cephalopods, crustaceans, stingrays, and even other sharks. 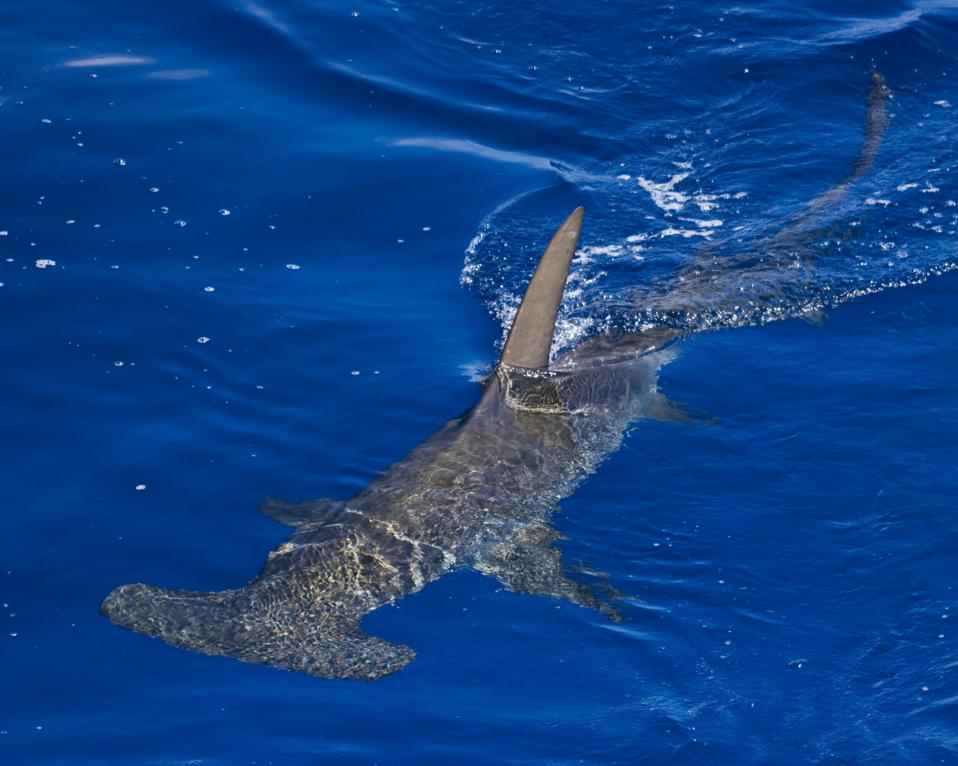 Great hammerhead sharks use their hammer-shaped heads to detect and eat prey, and have even been … [+] seen pinning down stingrays!

While there have been lots of observations of great hammerheads eating sharks and rays, no study before has been able to see if this was just a sporadic thing or whether this formed a large part of their diet. According to the lead author of a new study that investigates great hammerhead diets, marine ecologist Dr. Vincent Raoult of the University of Newcastle, a lot of historical gut content data suggested these sharks eat fish. However, this past data focused on mostly small sharks, whereas this new study investigated large sharks from 10 to 13 ft (3 – 4 m) total length (TL).

By researching the resource use of great hammerhead sharks off eastern Australia, they found that not only are these sharks apex predators in this coastal ecosystem but that they specialize in eating stingrays and sharks. An apex predator is, by definition, one that is the top of a food chain that is not preyed upon by any other animal. “Apex predators keep the balance of our ecosystem in check, they keep it healthy, so this discovery about the great hammerhead really emphasizes its importance,” stressed Raoult in a press release. By tipping the scales at almost 991 lbs (450 kg) it is no surprise these animals have no one who wants to have a go at them, but the species does have one predator: humans. Vulnerable to overfishing, they are targeted for their valuable fins in longline, bottom trawl, gillnet and hook-and-line fisheries. In the wild, their fins help them generate lift by swimming at angles… but these same fins that make their lives easier also make them a target. Large fins mean a large price tag, and it is not uncommon to see them in shark fin soup around the world. Even if a great hammerhead shark is caught by targeted or incidental fisheries and let go, most of these animals die due to the stress. This high mortality rate, along with their coastal habitat and highly valued fin, makes them vulnerable to extinction. The International Union for Conservation of Nature (IUCN) agrees, having assessed them as Endangered (EN). 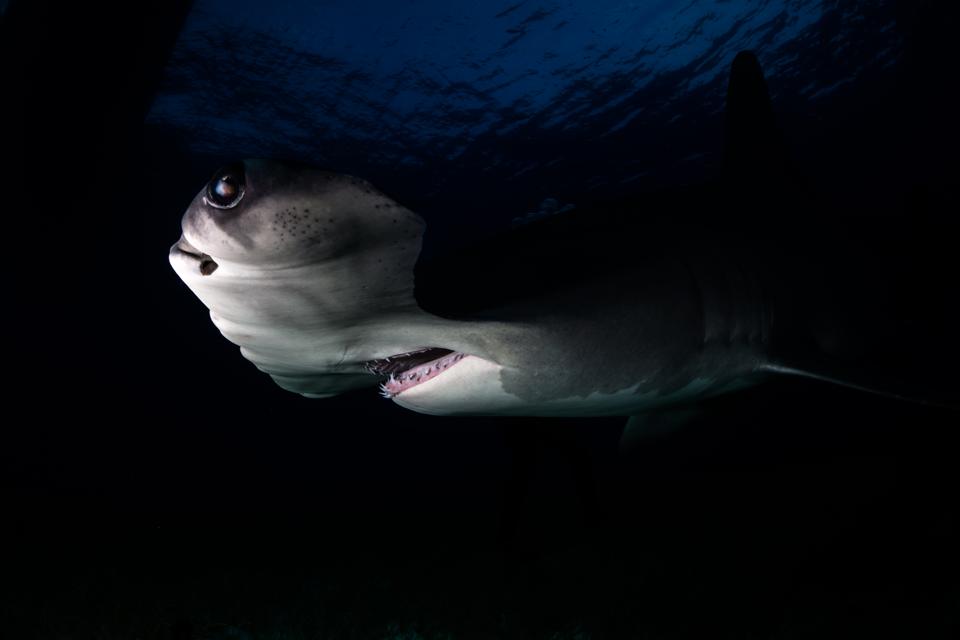 A Great Hammerhead shark around Bahamas in Tiger Beach

With populations of the shark having declined by more than 90 per cent over the last 50 years on the east coast of Australia, Raoult said he hoped the research would result in added protection for the species. “Until now the role of these sharks in the food webs of coastal ecosystems has been poorly understood,” he explained. “What our research has found is that the great hammerhead shark is in fact the ‘shark predator’, it confirms that they are at the top of the food chain and highlights that their role in our coastal ecosystem is absolutely crucial.”

Giving larger great hammerheads the label of “shark and ray specialists” makes them one of the few shark species that specializes in eating other sharks and rays. By studying stable isotopes of samples of muscle, liver and vertebrae – called the “black box” for sharks – from these sharks caught as bycatch off eastern Australia, the team were able to determine that great hammerhead sharks greater than 10 ft (3 m) feed primarily on whaler sharks and stingrays (such as the Australian cownose rays, Rhinoperon neglecta). But this isn’t the case from a young age. “It looks like there are very different approaches of these sharks over time, from the vertebral analyses,” said Raoult. “Some switch almost immediately to sharks/rays at a small size, some wait until they are large, etc. So individual sharks have very different preferences in diet.” The researchers also found isotope values that suggest these sharks link coastal, benthic and pelagic ecosystems, further showcasing how important apex predators they are for these ecosystems. 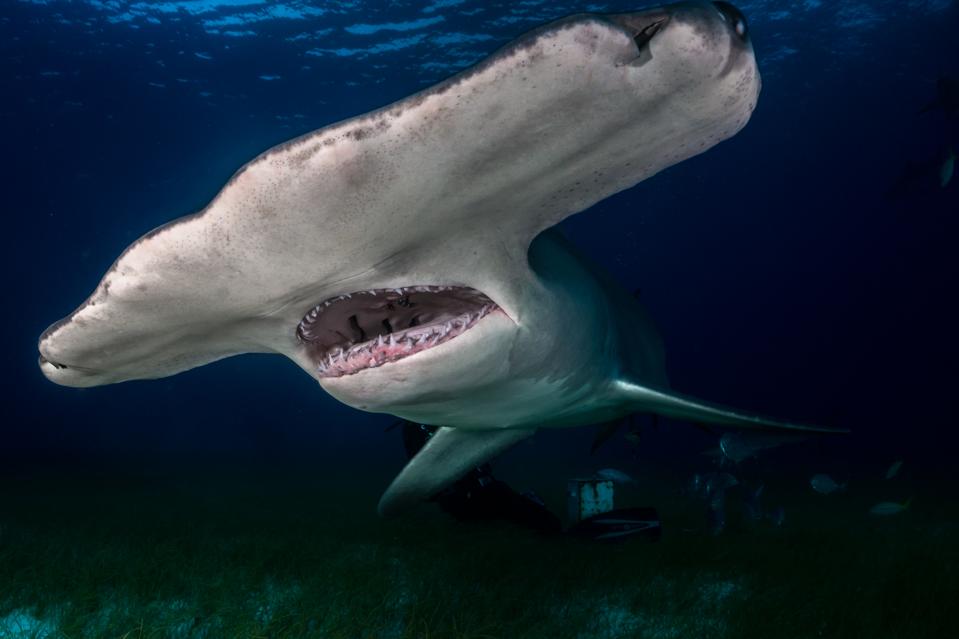 A Great Hammerhead shark around Bahamas in Tiger Beach

“Now that our study has shown just how important their role is in linking coastal food webs, it is absolutely crucial that we see urgent conservation of the species. As apex predators their extinction would have a vast ecological impact on the coastal ecosystem and protection is essential to support stability across economically important coastal ecosystems,” concluded Raoult.

Here’s hoping this latest research helps these sharks take a big bite into a brighter future free from all the threats they currently face!

All Bunny Day DIY Recipes: How To Get...