Breaking
Rival Independent ‘Oversight Board’ Formed By Facebook’s Rivals
Meet George The Poet: Spoken Word Artist Partnering...
Parrot Plumage Color May Be Linked To Body...
Best Applicant Tracking Software
Recent Precious Metals Dip A Buying Opportunity
Looking For Venture Capital? Here’s How One 50+...
Trump Will Create More Debt Than Obama
Growing Your Retirement Money Using 401(k) Dollar-Cost Averaging
Wellness Exec Abby Miller Levy Partners With Venture...
Microsoft Teams Issues Strike To Zoom With Tidal...
What’s Coming For The S&P 500 In October
4 Ways You Can Showcase Empathy With Your...
A $22,000 Microsoft Surface Will Soon Be For...
Zooming In – Should SMEs Invest In The...
iOS 14: The Surprising Security Risk Of Sharing...
How A Break From Lord Sugar Changed The...
Home Business What’s Next For Rashard Higgins After Singing One-Year Deal With Browns?
Business

What’s Next For Rashard Higgins After Singing One-Year Deal With Browns? 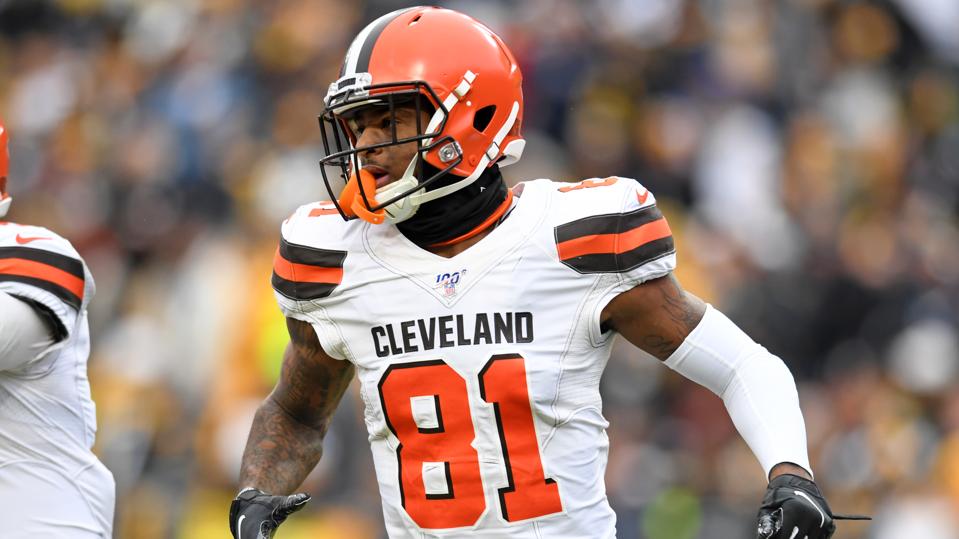 PITTSBURGH, PA – DECEMBER 1, 2019: Wide receiver Rashard Higgins #81 of the Cleveland Browns runs … [+] off the field after a 15-yard touchdown by running back Kareem Hunt #27 in the second quarter of a game on December 1, 2019 at Heinz Field in Pittsburgh, Pennsylvania. Pittsburgh won 20-13. (Photo by: 2019 Nick Cammett/Diamond Images via Getty Images)

Rashard Higgins signed a one-year $910,000 deal to return to the Browns on Tuesday. According to ESPN’s Jake Trotter, Higgins took less money to stay in Cleveland because of his relationship with Baker Mayfield.

Higgins caught just four passes for 55 yards and one touchdown last year, a disappointing follow-up to his 2018 campaign that featured 39 catches for 572 yards and four touchdowns. He played in just 10 of 16 games. Only four of those absences were due to his sprained knee. Rumors emerged late in the season that Higgins and coach Freddie Kitchens did not get along.

With Kitchens gone, Higgins has a chance to prove his talent under new coach Kevin Stefanski. The Browns’ receiving depth is slim after stalwarts Odell Beckham Jr. and Jarvis Landry.

Despite his experience and production advantages, though, Higgins has a lot to prove after last season. Sure, his production drop-off was partially caused by injury (Higgins missed four games with a sprained right knee). And no, he wasn’t the only player rumored to have butt heads with the since-fired Kitchens. David Njoku, Landry and Beckham Jr. all took issue with Kitchens at different parts of last season.

But Higgins hasn’t earned the same status as Landry, Beckham (Njoku isn’t guaranteed more than one more year in Cleveland either, by the way).Maybe Higgins was right when he said he should’ve played against the 49ers on Oct. 7 or against the Seahawks a week later. But maybe he shouldn’t have caused a stir by telling the media as much.

Now Higgins can start over under Stefanski. The Browns hope Higgins can return to the productive slot role in which he relished during the second half of 2018. He’ll see plenty of single coverage with Landry and Beckham lined up alongside him.

His chemistry with Mayfield will help, too. Higgins and Mayfield became friends during Mayfield’s rookie season while working with the second-string offense together.

They became close enough for Mayfield to act as Higgins’ faux photographer when Higgins celebrates touchdowns with a walk down the red carpet, a nod to his “Hollywood” nickname. And despite last year’s turbulent season, Higgins took less money to stay in Cleveland with Mayfield.

The Browns might not be finished adding receiving talent. General Manager Andrew Berry has stressed an aggressive mindset when discussing talent acquisition this offseason. Even if they don’t add another receiver, Donovan Peoples-Jones has the talent to push Higgins in camp (if there is a camp).

But for now, Higgins looks like Cleveland’s No. 3 receiver in 2020. If he meshes with his coaches and performs well, maybe he won’t have to take less money to stay in Cleveland next year.

Spend Your Time In Isolation As A Thousand Year Old Vampire