Home Technology What’s The Best Way To Save An Ecosystem? By Pleasing Palates!
Technology

What’s The Best Way To Save An Ecosystem? By Pleasing Palates! 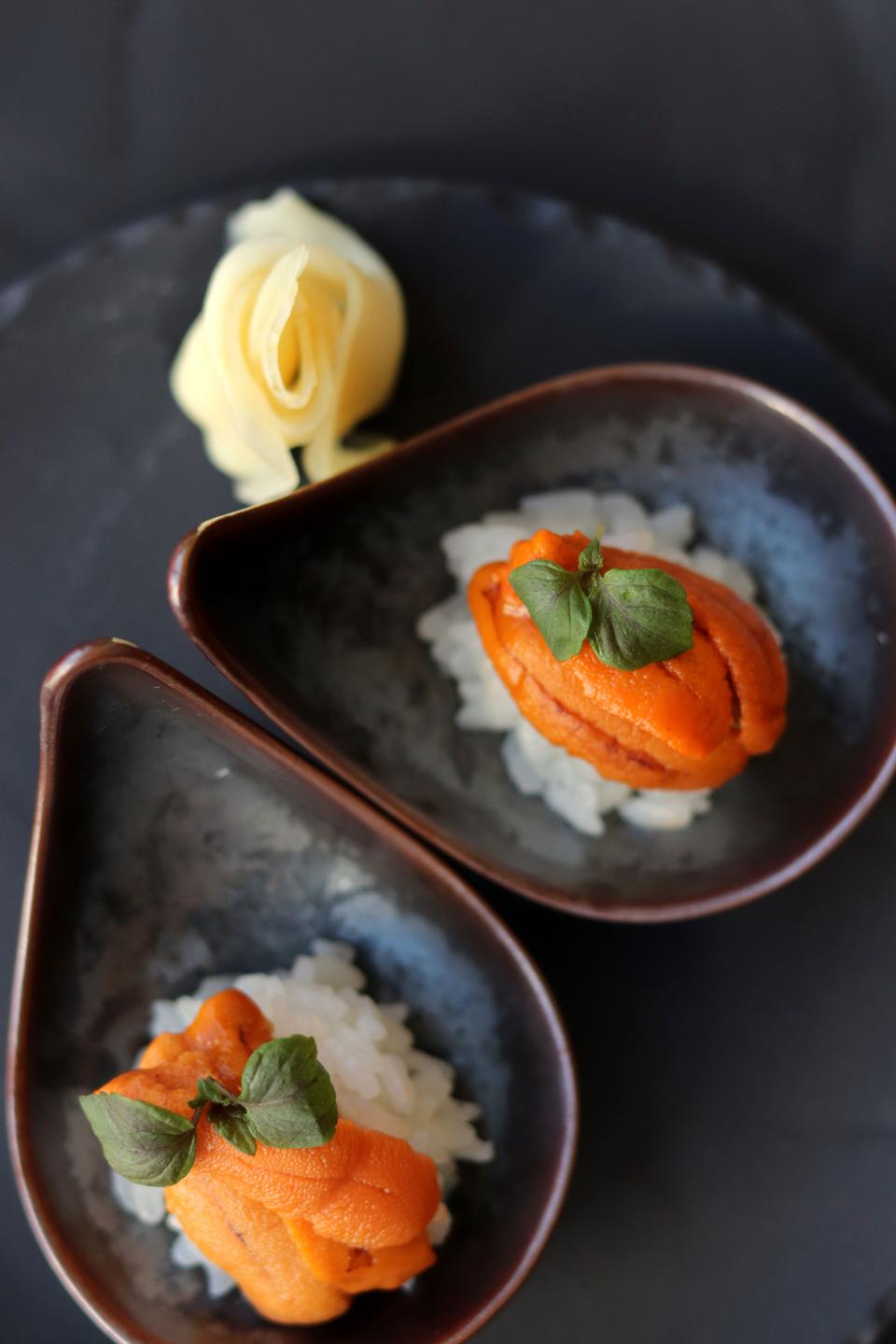 Uni roe served atop rice in a simple and delicious dish. Sea urchin roe sushi, known as ‘uni’ is a … [+] delicacy served in sushi restaurants. It is bright orange or yellow-orange in color and has a soft, melt-in-your-mouth texture.

Kelp forests are in danger of disappearing with purple sea urchins gobbling up kelp at unprecedented rates. Due to a 10,000-fold increase in population levels, purple urchins are killing off the very food source that they rely on. In the face of surmounting pressures, one company is out to turn the tide on urchin barrens by collecting, fattening-up, and selling the echinoderms.

Calling themselves a ‘restorative aquaculture venture’ the Urchinomics website states that “removing overgrazing sea urchins helps turn a barren seafloor back into a vibrant kelp forest,” By utilizing commercial and volunteer divers t0 collect urchins, they “are then ranched and sold as premium seafood to restaurants globally”. Since its inception in 2015, the company has run trials in Japan, Norway, Australia, Canada and the US.

The goal at Urchinomics is two-fold; remove urchins that are over-grazing on kelp and provide an economic incentive that makes sure there is plenty of continuous fishing pressure on these urchins. 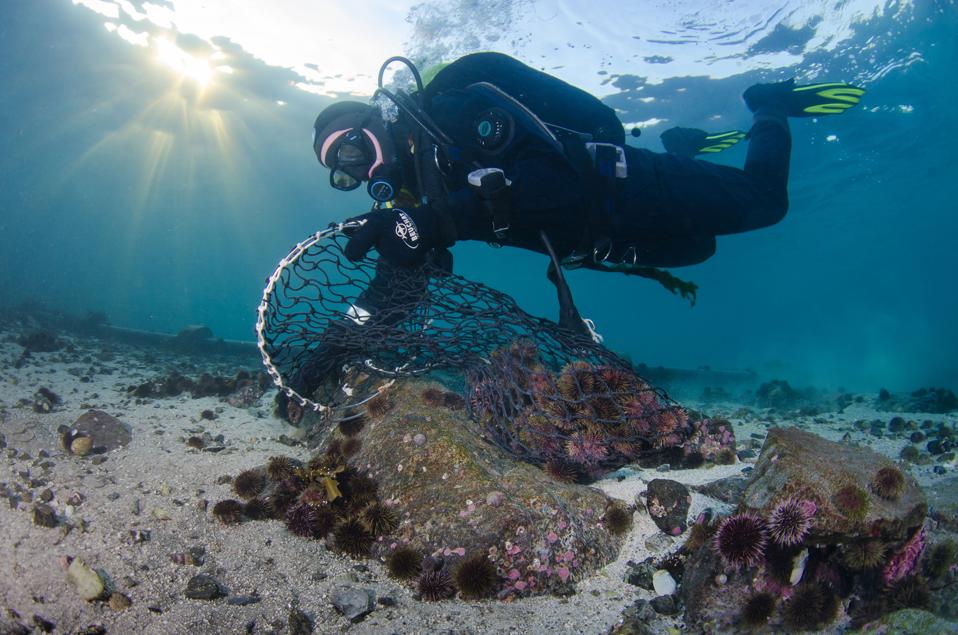 A scuba diver collects purple urchins that will be ranched.

Urchinomics recently released news of a new facility opening soon in Bodega Bay, California. Brian Tsuyoshi Takeda, Urchinomics CEO & Founder, told Forbes.com in an interview last month that “Urchinomics is prepared to invest millions to get this site up and running once the lease and permits are all in place”.

“Permitted aquaculture facilities in coastal California are as rare as unicorns…Now it’s just a matter of the lawyers working out the details but provided everything goes through we will have access to a fully permitted aquaculture site” Takeda told Undercurrent News. Urchinomics plans to harvest its first urchins at the California site by the end of 2020.

The only edible parts of an urchin are the gonads (roe) that make up about 15% of their weight. Cracking open an urchin reveals bright orange masses of roe inside, which somewhat resemble a tongue and is known as ‘uni’ in sushi restaurants.

The urchins that are covering the west coast are not only pervasive, they’re also starving. The collapse of kelp forests means that the food the urchins are after, is no longer available to them. Urchins found in urchin barrens are empty shells, but they continue to live on. They can live in this starved state for quite some time, and in the process they reproduce, prevent other species from occupying the space, and prevent new kelp from growing. 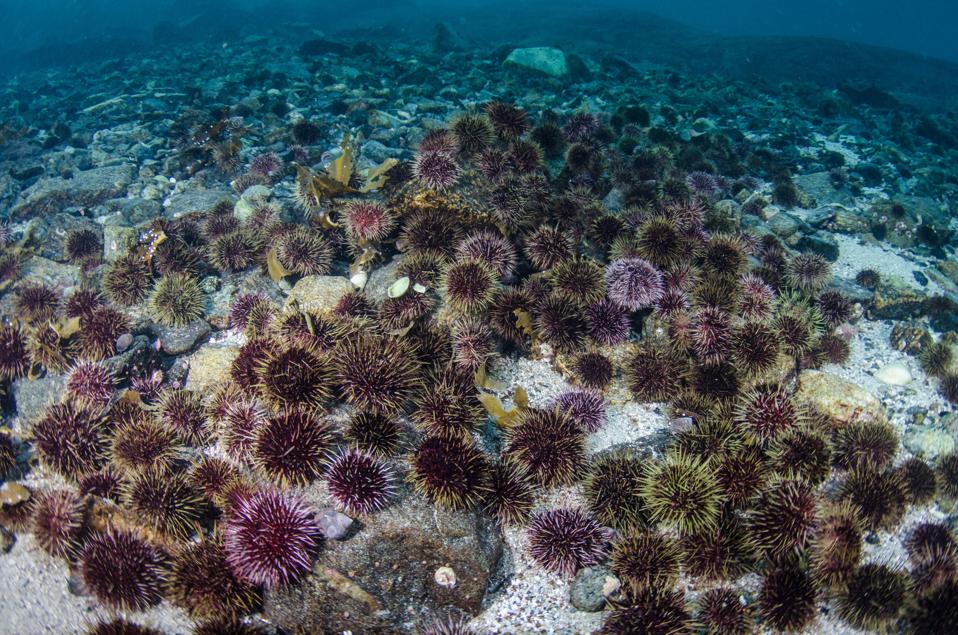 Purple urchins cover every square inch of what used to be a vibrant kelp forest.

“They can survive for years, decades, with nothing to eat. Once an urchin takes over an ocean floor, they’re there for a long, long time” according to Takeda, via Undercurrent News.

Removing overgrazing sea urchins helps turn a barren seafloor back into a vibrant kelp forest. Sea urchins are then ranched and sold as premium seafood to restaurants globally.

Urchinomics is ranching their collected urchins in sea cages and land-based raceways. One focus for the company is delivering a high-quality product that will create a market for purple urchins. A question raised by investors at a Fish 2.0, a 2-day seafood conference held in November in Palo Alto, CA, was whether or not Urchinomics will be able to find a large enough market in California.

Generally, only red urchins are harvested for uni, due to their larger size and greater amount of roe inside. Urchinomics is venturing into uncharted territory and is creating a new market with purple urchins. 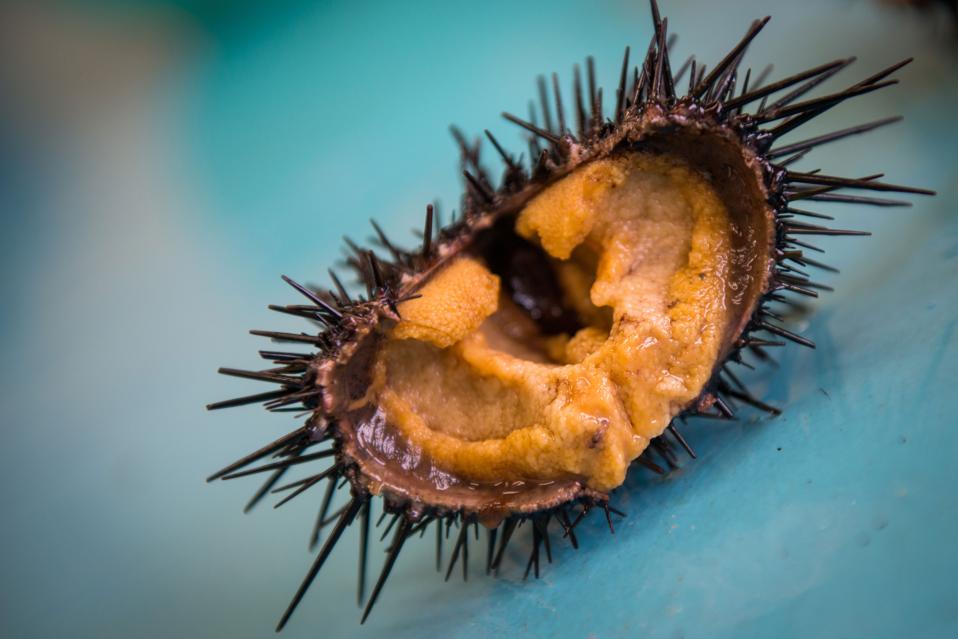 Inside of a ranched purple urchin. After being fattened up on a diet of sustainably harvested kelp, … [+] urchins are full of bright orange roe that can be harvested. 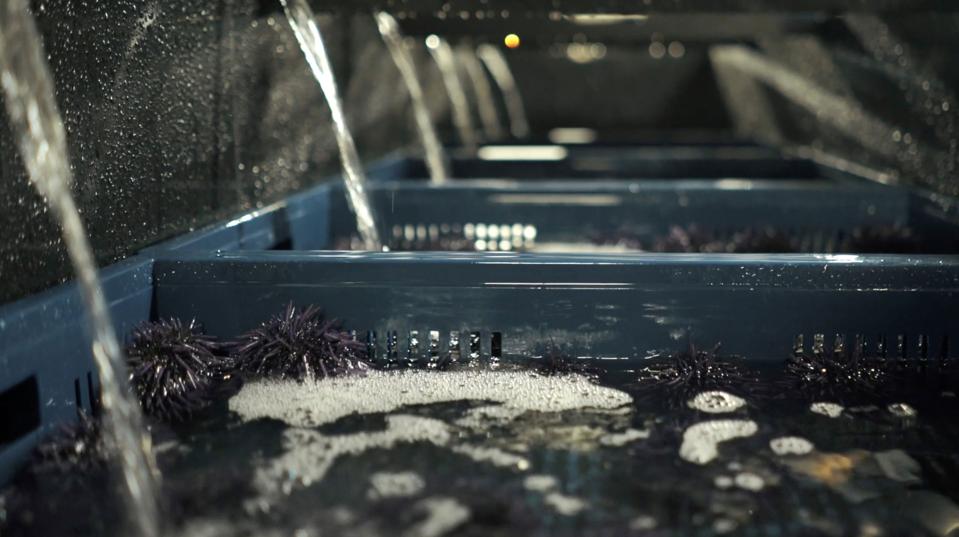 One urchin ranching technique known as a raceway system, where a continuous flow of water through … [+] the tanks keeps urchins healthy.

In the race to save the kelp, time is paramount. In order for kelp forests to regrow, the kelp that has been able to survive the urchin attack thus far must be protected, at the same time as urchins are being removed. Takeda believes that this is only possible through the joint efforts of ocean-loving investors and a larger Urchinomics facility. “We are prepared to license our technology at nominal, non-commercial rates to like-minded funders who would want to make their capital work for a good cause…to generate as much “impact” as possible”.

No End In Sight: Protesters Back In Hong Kong, Throw Jabs At China

Want To Lease A Lidar? Luminar Has Novel...

Why The Race For AI Dominance Is More...