Home Finance What’s The Risk Of A Market Crash In 2020?
Finance 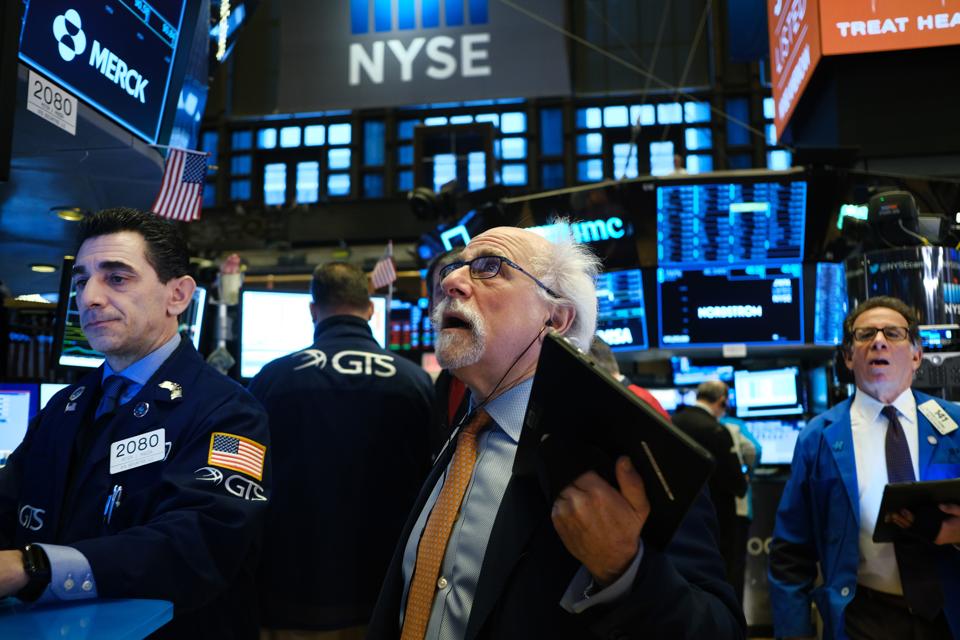 NEW YORK, NEW YORK – JANUARY 21: Traders work on the floor of the New York Stock Exchange (NYSE) on … [+] January 21, 2020 in New York City. Markets were down slightly in morning trading as investors weigh concerns over a virus outbreak in China and continued trade concerns between the U.S. and China. (Photo by Spencer Platt/Getty Images)

Stock market crashes are tough to predict. Fortunately, they are also quite a bit rarer than you might think. The stock market dropping overnight has historically appeared a result of either glitches in trading operations or unexpectedly correlated behavior such as forced selling. For example it is now often believed that the 1987 Black Monday crash where the markets fell over 20% in a day was primarily driven by portfolio insurance, where many investors had trading rules in place causing them to sell if the markets dropped by a certain amount. The intent was to protect these investors from larger losses. The reality was that these trading plans may have made a potentially milder crash a lot worse. Yes, there is always a trigger event, but though it kicks things off, there can be multiple potential triggers and its the correlated selling that leads to a big decline and a crash rather than a more normal small dip. Fortunately, circuit breakers may help manage crash risk going forward.

Still, crashes appear an endemic risk of investing in the market. As such they are hard to predict. What is more common is a simple bear market. That stocks will decline, not overnight, but over a period of multiple months. This outcome does appear more likely today for two main reasons.

Now, the catch with valuation is it can’t time the market all that well. It suggests returns to the U.S. market will be depressed over the coming years, but it does a poor job forecasting the direction of the market next month, or even next year. Only when you look out a few years does valuation offer a reasonable amount of forecasting power and even then it can inform the market’s broad direction but you can’t be certain. For example, the U.S. markets have been expensive for a few year now, and Alan Greenspan, then Fed Chair, made his famous “irrational exuberance” comment about the market in 1996, suggesting it was overvalued. The market only fell a few years later. So valuation is definitely a imprecise short-term metric.

The second issue is the economy. Now there are things to worry about with the economy, notably manufacturing currently. This is always true, of course. There has virtually never been a period in history when any major economy has been without at least a few dark clouds.

However, the argument here is a bit more macro as it relates to the stock market. Essentially, unemployment in the U.S. at 3.5% is extremely low. On the face of it that’s great news. Lower unemployment, more consumer spending, faster growth. All true so far as it goes.

Now, in the U.S. we have the opposite situation. Valuations are very high as discussed above and unemployment is great, but it just can’t get that much better from here for that much longer. Again, this is not to say that the U.S. economy won’t see a good run for a few more months or even years, but that for investors valuations can’t rise much more and earnings too are likely a bit stretched. Hence the risks may be to the downside, even if we can’t forecast the timing.

Furthermore, in addition to rising unemployment, assuming that happens, the other risk is an inverted yield curve. This happened last year. Analysis suggests that the yield curve and unemployment are the best recession predictors. Recession can, in turn, drive the markets.

It therefore seems that the risks to the markets are to the downside. Not necessarily this month or year, but on a medium-term view. Sadly, those forecasting methods that are somewhat reliable, based on history, do take a few years to play out, and even then they aren’t guaranteed. Still, the omens don’t look good. Nonetheless, equities have still historically been the best asset class over the very long term, so if history is any guide, even with a rough patch for stocks, you’ll still likely come out ahead on a decade plus view if sufficiently diversified in your investing approach and historical trends hold.

What should you do as an investor? Well buy and hold is often considered a fine strategy. You can potentially ignore all macro forecasts, most of which are wrong anyway, and stay in the market. The only challenge there is that buy and hold is a much easier to convince yourself of during positive markets.

You need to be sure you can indeed hold through the next bear market, especially since your portfolio risk level may have increased recently. If not, consider taking some risk of the table, by switching out some stocks for bonds or diversifying internationally. So whether or not we see a crash in 2020 is impossible to say, but there is a risk that market returns, especially for the U.S., are a lot less good for the next few years, than we’ve seen in recent history.