Home Technology When Is The Next Eclipse? 2020’s ‘Ring of Fire’ Will Rock The Roof Of The World Before ‘The Big One’
Technology

When Is The Next Eclipse? 2020’s ‘Ring of Fire’ Will Rock The Roof Of The World Before ‘The Big One’

The Baily’s Beads effect is seen as the moon makes its final move over the sun during the total … [+] solar eclipse on Monday, August 21, 2017 above Madras, Oregon. A total solar eclipse swept across a narrow portion of the contiguous United States from Lincoln Beach, Oregon to Charleston, South Carolina. A partial solar eclipse was visible across the entire North American continent along with parts of South America, Africa, and Europe.

A “ring of fire” annular solar eclipse just ripped across the world, with a ring around the Moon visible from Saudi Arabia to Guam via Oman, southern India, northern Sri Lanka and Singapore.

Now the Christmas Eclipse” is over, when’s the next one? In 2020 there will be two such events, but both are dramatically different. The first one is also an annular solar eclipse—but only just—while the second one is destined to be a very similar event to the “Great American” total solar eclipse of August 21, 2017. Are you ready to witness totality a second time? Here’s everything you need to know about 2020’s two solar eclipses.

Image made with pictures taken on February 26, 2017 showing an annular solar eclipse, as seen from … [+] the Estancia El Muster, near Sarmiento, Chubut province, 1600 km south of Buenos Aires, Argentina, on February 26, 2017. Stargazers applauded as they were plunged into darkness Sunday when the moon passed in front of the sun in a spectacular “ring of fire” eclipse. / AFP / ALEJANDRO PAGNI (Photo credit should read ALEJANDRO PAGNI/AFP via Getty Images)

When is the next annular solar eclipse?

The “Christmas Eclipse” was just a warm-up for Asian eclipse-chasers. In six months on Sunday, June 21, 2020 another—arguably much more dramatic—annular solar eclipse will be visible across northern Asia. Beginning at 03:45 UT and continuing until 09:33 UT this “ring of fire” will be visible at sunrise in the Congo, Democratic Republic of Congo, then as a higher-in-the-sky spectacle in South Sudan, Ethiopia, Eritrea, Yemen, Oman, Pakistan, India, Tibet, China and Taiwan. Again, sunset is in the Pacific Ocean, this time south of Guam.

Why June’s eclipse is so special

However, it will be a very different kind of ‘ring of fire’ than the one this coming Christmas. “It will have a much thinner ring, a higher magnitude and obscuration,” says  Xavier Jubier, a member of the International Astronomical Union (IAU) Working Group on Solar Eclipses and keeper of the go-to eclipse maps website. “Having a thinner ring is nicer as it will provide more beading phenomena.” Ah yes, Baily’s Beads. At a total solar eclipse it’s possible to see these last few beads of light from the Sun pouring through the Moon’s valleys in the moments before the ‘diamond ring’ and totality. At an annular solar eclipse the only way to see even a hint of them is to observe from the extreme edge of the eclipse track, but even then they’re difficult and fleeting. However, because the magnitude of the annular solar eclipse on June 21, 2020 is so “big” at 99%—effectively nearly a total solar eclipse—it could be possible to see Baily’s Beads from near the edges of the path of annularity.

Although there will be a long partial solar eclipse, the actual “ring of fire” sight will last for around a minute depending on where you view from, though it’s just 23 seconds from the track’s center point close to Lhasa, Tibet. South of Muscat in Oman and the iconic Lalibela in Ethiopia—famous for its rock-hewn monolithic churches—are other places to consider. 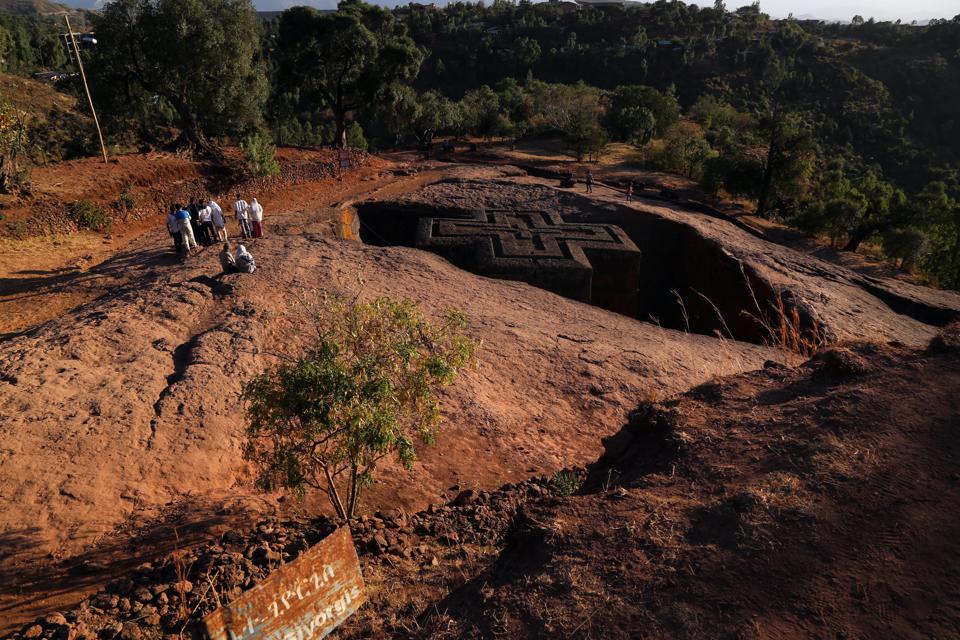 LALIBELA, ETHIOPIA – FEBRUARY 01: People visit the rock-hewn monolithic Church of St. George in … [+] Lalibela on February 01, 2019. The 11 medieval monolithic cave churches of this 13th-century are situated in a mountainous region in the heart of Ethiopia near a traditional village with circular-shaped dwellings. Lalibela is a high place of Ethiopian Christianity, still today a place of pilmigrage and devotion. (Photo by Minasse Wondimu Hailu/Anadolu Agency/Getty Images)

It may even be possible to see other phenomena normally associated with total solar eclipses, such as shadow bands and the solar corona. “It will also get a little darker and you can get this eerie light that you can experience shortly before totality for total solar eclipses,” says Jubier. According to Jay Anderson on eclipsophile.com, the best places – weather-wise and accessibility-wise – are south of Muscat in Oman, at Lalibela in Ethiopia (famous for its rock-cut monolithic churches), and 285km north of Lhasa, Tibet. 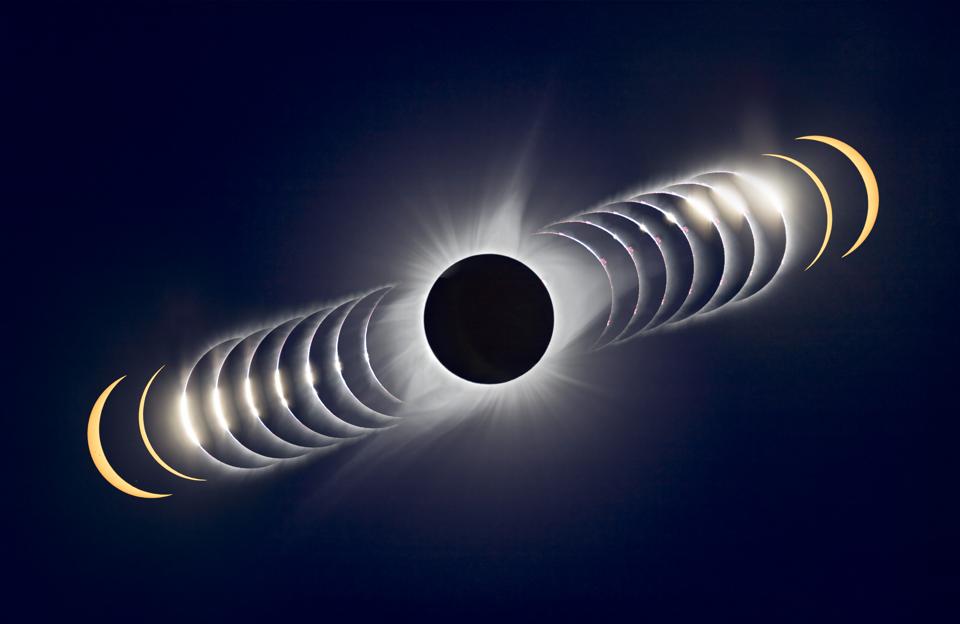 HereÕs a variation on creating a time-sequence composite of the August 21, 2017 total solar eclipse. … [+] In this case, time runs from left to right, from the last filtered partial phases I shot, through unfiltered shots of the rapidly changing last glimmer of sunlight disappearing behind the advancing Moon at ÒSecond Contact,Ó forming ÒBailyÕs Beads, to totality at centre ] The sequence continues at right with the Sun emerging from behind the Moon in a rapid sequence at ÒThird Contact,Ó followed by two post-totality filtered partials to bookend the total eclipse images The C3 limb had a beautiful array of pink prominences The Contact 2 and 3 images were taken in rapid-fire continuous mode and so are only fractions of a second apart in real time Most are 1/4000th second exposures. (Photo by: VW Pics/Universal Images Group via Getty Images)

When is the next total solar eclipse?

Pretty though “ring of fire” eclipses are, many experienced eclipse-chasers think of them as a warm-up to the really special spectacle—a total solar eclipse. That will occur on December 14, 2020 in Chile and Argentina when for 2 minutes 9 seconds observers in the path of totality will thrown into darkness and get to glimpse the solar corona with their naked eyes. What a treat!

This eclipse happens during the peak of the southern hemisphere summer when the Sun is very high in the sky. In that sense—and also in terms of the duration of totality—the 2020 eclipse will be broadly similar in character to the “Great American Eclipse” of August 21, 2017.

It’s all about finding clear skies. Although many tour groups are headed to Villarrica and Pucón in Chile, the highest chance of clear skies is actually across the border in Argentina’s region of Patagonia. 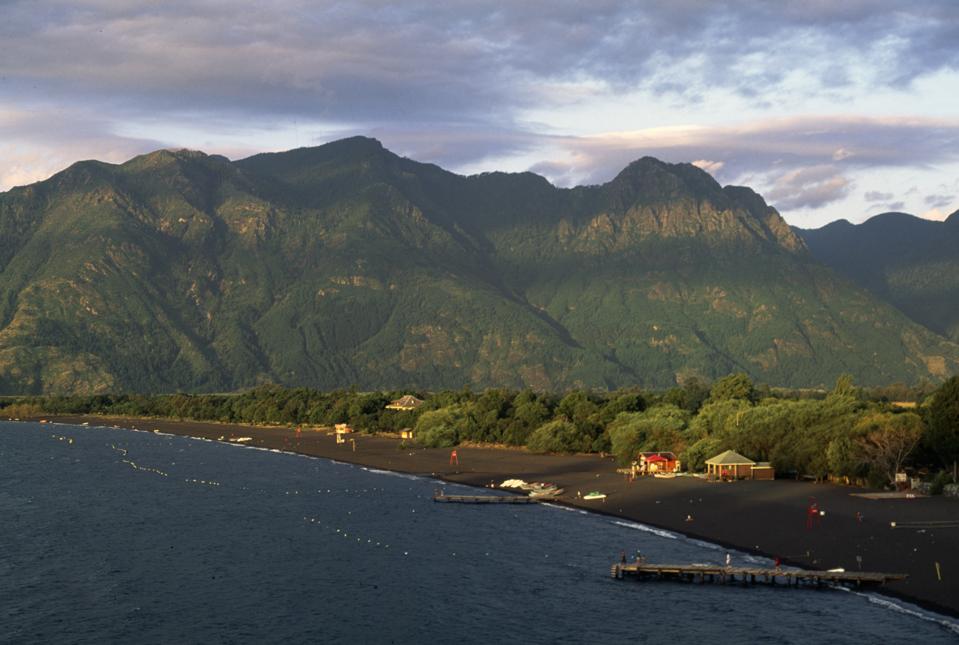 If you’re tempted, don’t fight it; this is the last “easy” eclipse for a few years since the following total solar eclipse is in Antarctica in December 2021, there is no event in 2022, and in 2023 only a remote part of Western Australia will experience a minute-long totality.

Disclaimer: I am the editor of WhenIsTheNextEclipse.com and co-author of “Total Solar Eclipse 2020: A travel and field guide to observing totality in Chile and Argentina on December 14, 2020”