Breaking
Bernie Sanders Warns Republicans ‘Will Win’ In 2022...
5 Tips For Virtual Networking Success
10 Ways Covid-19 Vaccine Supply Chains Need To...
Here Come The Workers: 4 Steps To Take...
First Electric Car? Consider These Four Big Upsides...
What’s Missing From Howard Marks’ “Something Of Value”
A 10 Billion-Year-Old ‘Super-Earth’ Has Been Found In...
David Einhorn Warns Of Danger From Valuation-Indifferent Investors
How Safe Is Your Stock Portfolio Over 30...
Technology Is Rapidly Changing Cancer Care
4 Major Market Changes In 2020 That Can...
Boston Globe Starting “Fresh Start” Initiative As Part...
Can Money Protect You From Covid-19? It May...
The Most Important Voice In Artificial Intelligence: Frontline...
How to Start an Online Store
Amazon’s Small Business Empowerment Team Is Helping Entrepreneurs...
Home Business When Will America’s Last World War II Veterans Pass Away? [Infographic]
Business

75 years on from the end of the Second World War in Europe, approximately 325,000 of the 16 million Americans who served during the conflict are still alive on Memorial Day 2020. Their ranks are continuing to steadily decline, however, and the vast majority of those alive in 2020 are in their 90s while some are considerably older. Back in 2015, 939,000 U.S. WWII veterans were still alive and the number of stories and memories being lost daily is accelerating. Before the COVID-19 outbreak, the Department of Veterans Affairs (VA) calculated that 245 WWII veterans were expected to be lost every day between September 30, 2019 and September 30, 2020.

That raises a sad and depressing question: when will America lose its last World War II veterans? The VA used a deterministic actuarial projection model to forecast the number of living veterans up to 2045 and the following infographic is based on its findings. It shows that their ranks will fall further to just under 60,000 in five years with the very last U.S. WWII veteran expected to pass away in 2043. Unfortunately, the figures could well be impacted by the coronavirus pandemic. According to The New York Times, COVID-19 has spread in more than 40 veterans’ homes in more than 20 states, leading to the deaths of at least 300 people.

America lost its final veteran of the First World War just under a decade ago. Born in 1901, Frank Buckles enlisted in the army in 1917 where he went on to drive ambulances and motorcycles during the conflict in Europe before passing away in February 2011 at the ripe old age of 110. Also aged 110, Louisiana native Lawrence Brooks is currently America’s oldest known living World War II veteran. He served with the predominantly African-American 91st Engineers Battalion in the Pacific Theater between 1941 and 1945. 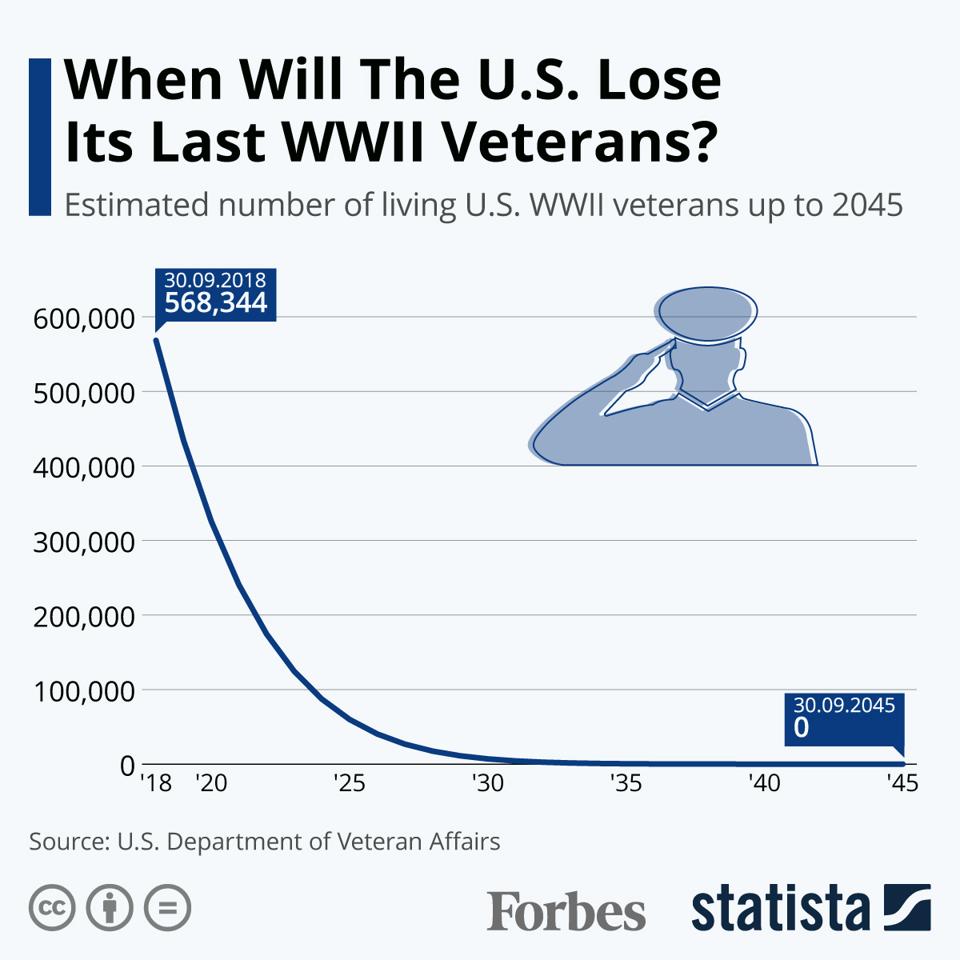 Estimated number of living U.S. WWII veterans up to 2045.