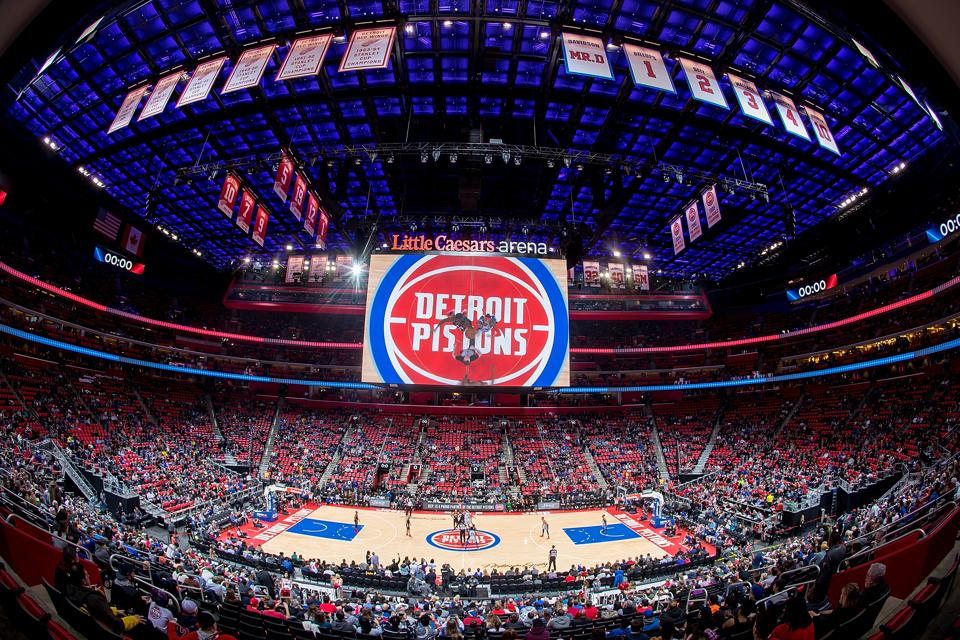 DETROIT, MI – JANUARY 06: A general view of the start of the NBA game between the Detroit Pistons … [+] and the Houston Rockets at Little Caesars Arena on January 6, 2018 in Detroit, Michigan. NOTE TO USER: User expressly acknowledges and agrees that, by downloading and or using this photograph, User is consenting to the terms and conditions of the Getty Images License Agreement. (Photo by Dave Reginek/Getty Images)

On Wednesday night, the Detroit Pistons continued an East Coast road trip in a game against the Philadelphia 76ers. They put up a fight but were defeated by the Sixers and absolutely none of that matters right now. In fact, none of that mattered while the game itself was going on, because before the final buzzer the NBA had suspended its season.

It was an obvious and necessary step to take after Rudy Gobert of the Utah Jazz tested positive for coronavirus right before tip off against the Oklahoma City Thunder. Within four minutes of the announcement of Gobert’s positive result, the NBA made their announcement. Clearly there was a policy in place that if a player tests positive, the season gets put on hold indefinitely.

All of these teams have been instructed to self -quarantine until further notice.

The Pistons played the Jazz in Detroit on Saturday, and as a result their players, staff and traveling team employees are under this self-quarantine restriction.

It’s hard to know what will happen next both for the Pistons and the NBA. The belief as it stands now is that the league will return for the remainder of its season, whether it be for the final 20% or so of games that remain, a small portion of those games or whether the regular season concludes and the playoffs immediately pick up.

As things stand for the Pistons right now, they are 20-46 and have the fifth-worst record in the NBA, which is also the fifth-best lottery slot. Ironically enough, they’re only a half-game out of a tie for the second-best slot, but all of the top three slots have equal odds: 52.1% to finish in the top three, 14% to get the No. 1 pick.

If the season did end, the Pistons would have a 42.1% chance to sneak into the top three and 10.5% to get the No. 1 pick. In fact, they have virtually equal odds to finish in any of the first four spots, they would be only 2.2% to maintain their standing in fifth, and they would have a 19.6% chance of dropping to sixth and a massive 26.7% chance of dropping to seventh.

Their slot is genuinely not that appealing, and considering the fact that the only time the Detroit Pistons have ever moved up in the lottery, they drafted Darko Milicic, it’s rather a daunting state of affairs.

Of course this is nothing but speculation at this point. The season may be back in full on a delayed basis, it may be back in part, it may return for nothing but the playoffs, it may be any other conceivable possibility or some inconceivable ones. We’re in uncharted waters at this point, and it’s hard to know if normal is something we will be able to return to even when the games start back up again.

Simple Apple Security Hack: If You Have TikTok On Your iPhone, Look Away Now

Anyone For A Free Lunch? Subway Gives Away...

Harry And Meghan: Their Final Round Of Public...

How To Prepare For The Coronavirus Work From...

Is It Really Too Soon To Decide About...