Breaking
The Impact of Internships in Marketing
3 use cases of chatbots for critical services
How To Make Working From Home Appeal To...
Tips on How to Design an Office Space...
4 Tips To Help Build Amazing Customer Relationships
How Are US Pension Funds Responding to the...
Benefits of second-hand cars for your business
4 Reasons Why Your App Needs To Undergo...
Your Guide to Online Marketing
How to find a Solicitor in London
5 car tyre and safety tips for a...
Everything You Need to Know About Corporate Social...
Is Adaptive Leadership the Key to Motivating Employees?
Why business events are set to return with...
Business events set to return with a bang!
Expanding Internationally: 5 Things to Consider for eCommerce...
Home Finance Where’s The Second $1,200 Stimulus Check?
Finance 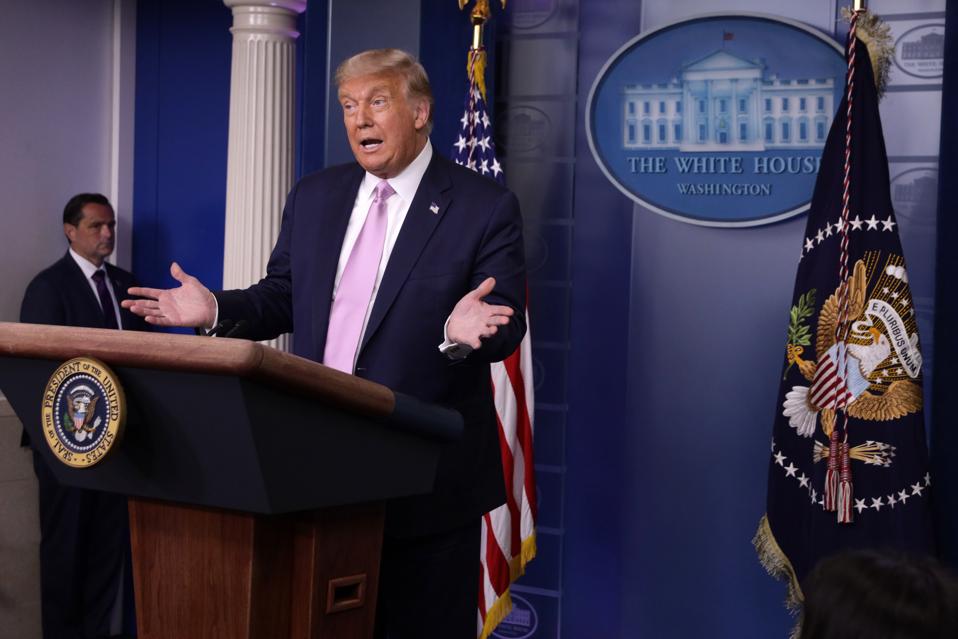 WASHINGTON, DC – AUGUST 11: U.S. President Donald Trump speaks during a news conference in the James … [+] Brady Press Briefing Room of the White House August 11, 2020 in Washington, DC. Trump discussed the coronavirus and several other topics, including the announcement by Democratic presidential candidate, former Vice President Joe Biden that he has chosen Sen. Kamala Harris to be his running mate in the 2020 general election. (Photo by Alex Wong/Getty Images)

Over the weekend, President Trump said that House Speaker Nancy Pelosi (D-CA) reached out to him to “get together” and continue negotiations on the next stimulus package.

Instead of more negotiations, politicians are ramping up the political rhetoric and blaming the other side for delays. In remarks on the Senate floor yesterday, Senate Leader Mitch McConnell (R-KY) said “This is not a Washington game. It’s a national crisis. It would serve the nation better if the Democratic leaders would act like it’s a crisis.”

The Democrat-majority House of Representatives passed the Heroes Act on May 15th, nearly three months ago, and the Republican-majority Senate took no action until very recently. Senator McConnell introduced the various parts of the Heals Act near the end of July – over two months after the House first took steps towards the next stimulus package.

The challenge in all this is that Senator McConnell can’t point the finger towards the twenty Republican senators who would not vote for any additional stimulus. He doesn’t have a majority vote to pass anything, which is why he needs the support of Democrat within the Senate to pass any stimulus bill.

As a result of the logjam, President Trump used executive action to try to implement parts of the stimulus package. These include federal unemployment benefits of $400 per week, a payroll tax deferral, student loan relief, and a moratorium on eviction proceedings.

As experts analyze the orders and predict how they will be implemented, it’s becoming increasingly likely that these will have a far more limited impact than the headlines imply.

For one example, the $400 per week unemployment benefit was structured as a $300 payment from the federal government and $100 from state governments. The federal government would pull funds from the Disaster Relief Fund but experts calculated that it may only last 5 weeks. States are already having budgeting shortfalls because of lowered tax revenues and may not even participate.

One piece of stimulus that was conspicuously absent was a second stimulus check.

Unfortunately, the President lacks the authority to issue a stimulus check and so if Americans are to get one, it must be passed into law by Congress.

The second stimulus check is one of the least contentious issues in the next stimulus package.

It also increased the amount for dependents to $1,200 and included all dependents, up to three per household. This is higher than what was offered in the first stimulus check.

It would only add $500 for each dependent with no age restriction but also no limit on the number of dependents.

Both bills structured the payments as an advance on a refundable tax credit.

Given such similarities between the two proposals, it’s extremely likely that the next stimulus bill will include a check in these amounts. If I had to choose, I’d say that a stimulus check that matched the one in the Cares Act, with an adjustment to the definition of a qualifying dependent, is the one most likely to be included.

The total cost is the biggest sticking point but Democrats have already moved down to a total price of $2 trillion, down from the estimated $3 trillion price tag of the Heroes Act. Last Friday, Mnuchin said even that price was a “non-starter.”

One silver lining in all this is that if a stimulus check is signed into law, Mnuchin said that the Treasury could issue the payment in as soon as a week. The first stimulus check took much longer, 13 business days, and it sounds like the Treasury has improved its processes from the first check.

Planning For After a Sale Of Real Estate, Artwork Or An Operating Business.