Breaking
Apple Loop: New iPhone 13 Leaks, Apple’s App...
25 of the Best Add-On Slack Apps to...
How to Resolve Duplicate Content
How Millennials Are Changing The Face Of B2B...
Bloggers of the Month: Kelly Jackson & It’s...
As Bitcoin Suddenly Surges Over $50,000, The Price...
In The Race To Retail Dominance, Customer Service...
Meet Onesimus, The Enslaved Man Who Saved Boston...
How to Build a Sales Forecast Model
The Unexpected Ways COVID-19 Has Forever Changed What...
Google Posts: Conversion Factor — Not Ranking Factor
How To Bring Your Branding To Life
Coinbase Cofounders And Investors Poised To Rake In...
How To Stay Top-of-Mind For Your Audience With...
Introducing The Chrome Extension: Get Share Counts, Links...
Employers: Eight Red Flags You May Not Notice...
Home Technology Which Countries Are The Biggest Financial Contributors To The World Health Organization? [Infographic]
Technology

Which Countries Are The Biggest Financial Contributors To The World Health Organization? [Infographic]

As the U.S. government’s inaction during the early stages of the COVID-19 pandemic comes under increasing scrutiny, President Trump attempted to shift blame to the World Health Organization during a press conference yesterday. With 400,000 confirmed cases and close to 13,000 deaths in the U.S. as of Wednesday, April 08 at 3 am EST, he has continued to deny all responsibility for the scale of the crisis, having already blamed the Obama administration, China and the media. Despite the WHO warning about the coronavirus as early as January, Trump accused the organization of “having called it wrong” and being “China-centric”.

The WHO declared COVID-19 a public health emergency on January 30 while Peter Navarro, Trump’s trade adviser, warned in a memo dated January 29 that the emerging virus could be a risk for millions of Americans and cost trillions of dollars. Yesterday, the president nevertheless said that the WHO “called it wrong. They missed the call. They could have called it months earlier”. Referring to U.S. financial contributions to the WHO, Trump then said that “we’re going to put a hold on money spent to the WHO”. He continued, adding that “we’re going to put a very powerful hold on it and we’re going to see”.

When subsequently asked if withholding money from the WHO in the middle of a pandemic was the right decision, Trump then seemed to backtrack, saying “no maybe not” before adding “I’m not saying I’m going to do it but we’re going to look at it.” So given yesterday’s events, how much do countries actually contribute do the WHO? There are two kinds of payments – assessed contributions and voluntary supplementary assessed contributions. The first one is what countries have to pay to be a member of the organization and the total amount is calculated relative to wealth and population. The second is obviously voluntary and a higher financial contribution members are encouraged to make.

In its most recent budget proposal in February, the Trump administration requested a reduction in U.S. financial contributions to the WHO from $122.6m to an assessed contribution of $57.9m. Despite the slashed budget, that figure still makes the U.S. the WHO’s top financial contributor by far. China pays in the second highest sum, $28.6m, followed by Japan’s $20.5m. The total sum of assessed contributions invoiced by the WHO on January 01 and due for payment this year stood at $246.8 million, of which $79 million had been paid by members as of March 31. 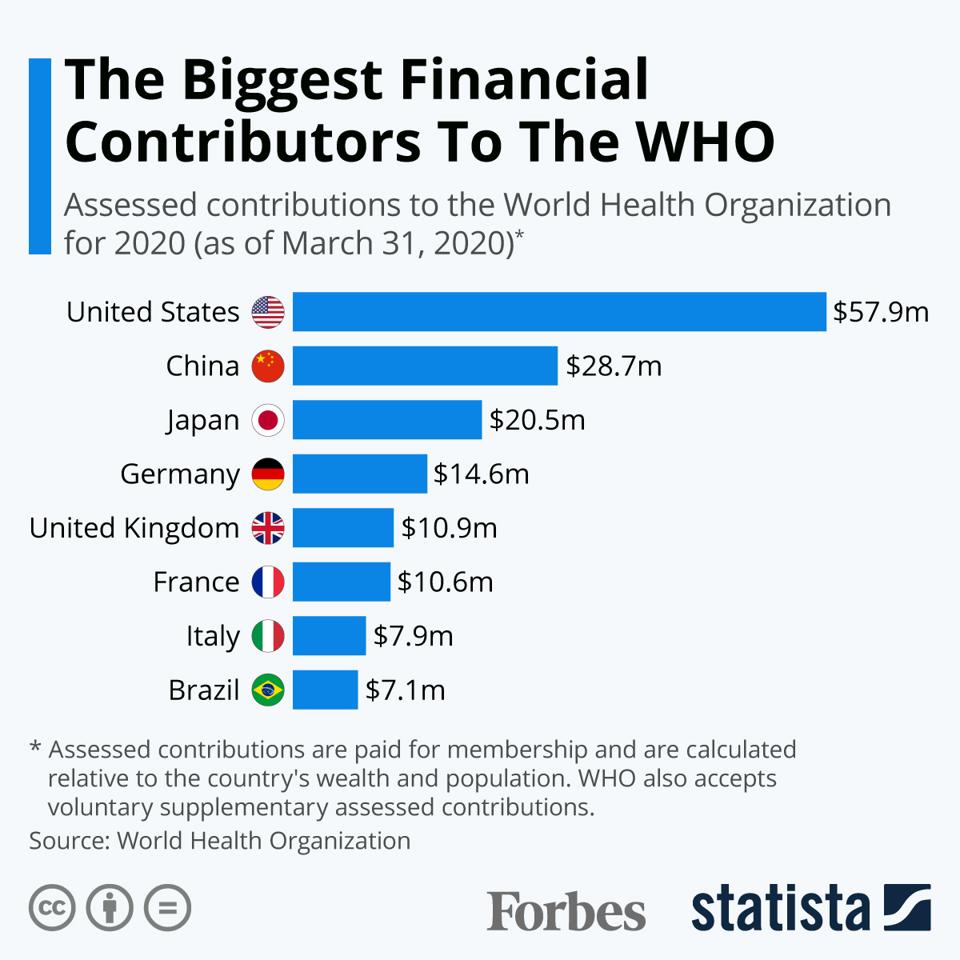 Assessed contributions to the World Health Organization for 2020 (as of March 31, 2020)