Home Business Which Trends Will Shape Soccer In The 2020s?
Business 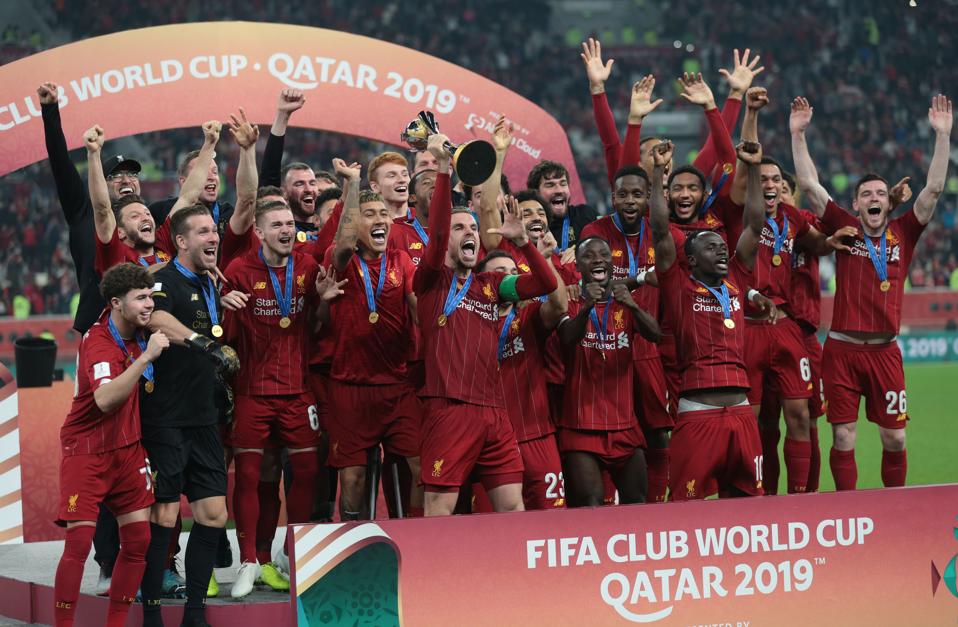 Liverpool is the European champions and Club World Cup champion. Big clubs like Liverpool are … [+] expected to continue their dominance in this decade. (Photo by Mohammed Dabbous/Anadolu Agency via Getty Images)

Soccer has seen its share of changes in the past 10 years. And, like any global industry, new developments must be expected that will shape the sport in the next decade.

From players speaking out on politics to clubs embracing data, here are six trends that could shape soccer in the next decade.

More Dominance from the Big Clubs

Buoyed by rising television revenue from an ever-increasing international audience, the game is richer than ever. English Premier League clubs spent $630.4 million on players in the 2009/10 season, according to Deloitte’s Sports Business Group. So far this season, with the January transfer window only just opened, they have already spent $1.83 billion.

The top clubs, in the big five European leagues, want to stay rich. But, with signs television revenue may have peaked, the top clubs, and competitions, must find new ways to bring in revenue in the 2020s.

A breakaway ‘European Super League’ for the continent’s giants has long been talked about. The format discussed is usually a league where the biggest clubs play one another and can’t be relegated – ensuring matchday and TV revenues are protected, even if one has a bad season.

Domestic leagues and plenty of fans are against the idea, but the big clubs are the powerful ones that, they would argue, bring in the advertising dollars and corporate sponsors. Even if a European Super League doesn’t eventuate in the next decade, it could be argued one already exists in the Champions League. This season, the last 16 is sides exclusively from the big five leagues. Seeing a team like Ajax reaching the latter stages (as it did last season) will be increasingly rare as the gap widens between the richest clubs and the rest.

Soccer has been slower than other sports to embrace statistical analysis, despite the benefits it offers in making informed decisions. Change is coming though, and companies already exist promising to make scouting and tactical decisions more efficient and effective.

The poster club for using data to guide decisions is Liverpool. The club committed to a more scientific way of working and is reaping the rewards. Liverpool is current European champion, world champion and on course to comfortably win the Premier League with a team playing fast, devastating soccer. Soccer can be a myopic industry, but Liverpool’s success must be an argument for a more analytical approach.

Referee decision making could also see more changes this decade. The introduction of VAR in the Premier League has been hugely (and probably unnecessarily) controversial. The game’s leaders will be reluctant to abandon VAR, so the answer may lie in how often it is used and consulted. 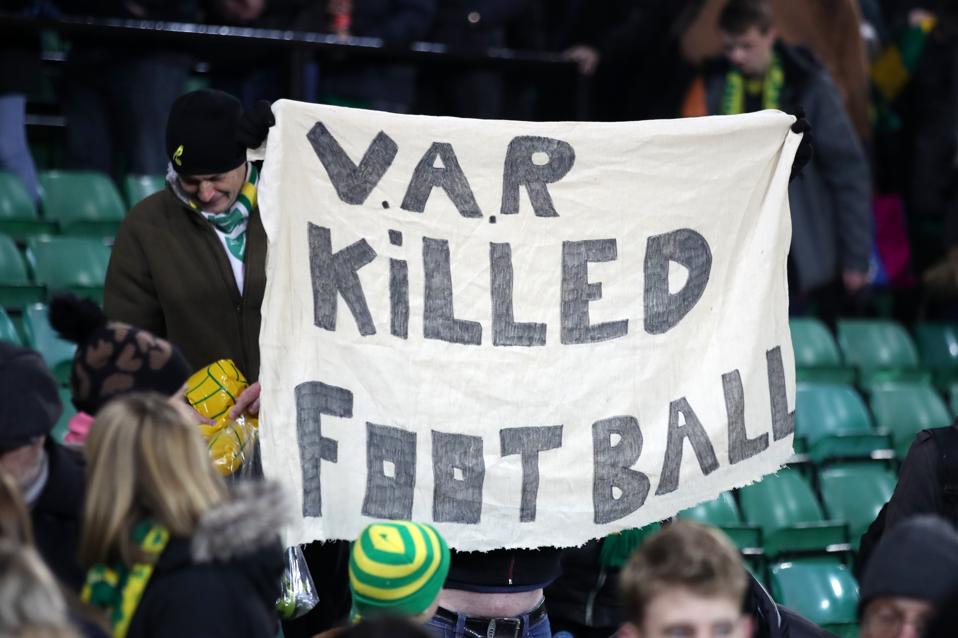 If decisions like the microscopic offsides keep happening in the Premier League, an alternative to relieve pressure on referees could be to hand the coaches an in-game challenge, or appeal. This too has its downsides, not least the risk of timewasting, but what’s clear, is the way the technology is used needs to evolve.

This is the first season the Premier League, one of the world’s best and most-intense competitions, introduced a winter break for its players. While it’s tempting to suggest players are sufficiently renumerated that they shouldn’t require a break, the Christmas period can be gruelling, with matches every couple of days. Combine this with international tournaments in the summer, and many players are on the pitch more than ever, at a time when the game has never been quicker. 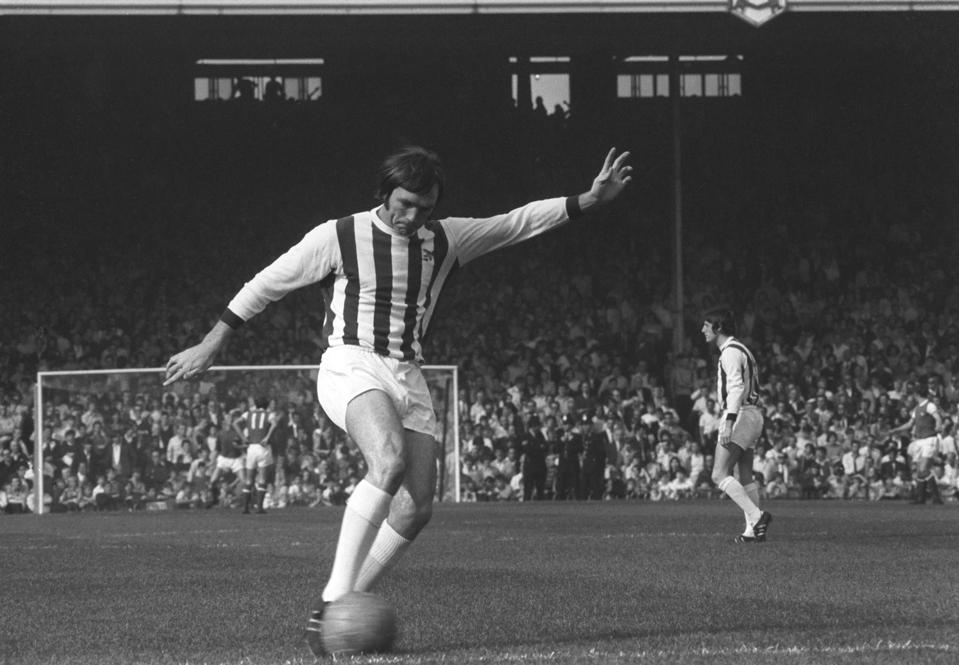 Jeff Astle, striker for West Bromwich Albion. In 2002, a coroner ruled the striker died from a … [+] degenerative brain disease caused by the constant heading of a wet, leather football throughout his 20-year professional soccer career. (Photo by PA Images via Getty Images).

The next 10 years will also doubtless see advancements in injury prevention. When it comes to injuries, teams are understandably keen to get their prized assets back playing as quickly as possible. A comparatively small investment in injury prevention techniques would ease the risk of seeing a player worth hundreds of millions of dollars on the operating table.

It will also be intriguing to see how soccer approaches its concussion protocols that have been called “the worst in the world”. A study released in October found former soccer players were three times more likely to die from dementia. A soccer match without heading is hard to imagine, but as more research is carried out, the effect on player health will have to be addressed.

While Fifa abandoned plans for the 2022 World Cup in Qatar to be the first with 48 teams, the following edition, in the U.S., Canada and Mexico, will be the biggest in history. Most commentators agree making the tournament 50% bigger will make it bloated, not more exciting. For Fifa though, it could mean an extra $1 billion in the bank.

The world governing body isn’t stopping there, with an expanded (and controversial) Club World Cup planned for 2021. From a Fifa perspective, its tournaments are by far its most lucrative activity, so it makes sense to try to squeeze as many dollars from them as possible. This also means we should expect tournaments to be hosted in locations where the hosts are keen to use sport to improve their public perception. And willing to invest large amounts to host.

The Club World Cup is set for China and the first World Cup of the decade will be in Qatar. With gulf states including Saudi Arabia keen to increase their “soft power” through sport, expect plenty of other soccer events to be held in this part of the world. 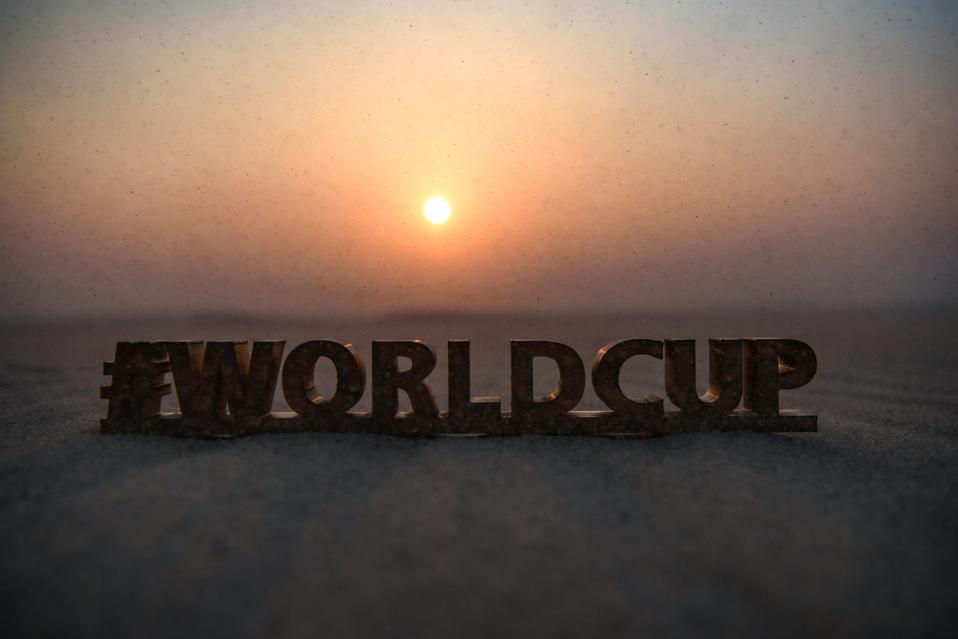 Top players are generally wary of speaking their minds on off-field issues. This is understandable given it is not in the interest of clubs to be seen as bias and players can alienate fans and make themselves less appealing to sponsors.

However, there are some who are happy to speak up. Megan Rapinoe has led the way in the past 12 months in reminding players of their responsibility to use their profiles for good. There are a few other recent examples of players expressing their beliefs. Arsenal defender Hector Bellerin made it clear he did not support British Prime Minister Boris Johnson in the recent UK election. Another Arsenal player, Mesut Özil, caused a stir after expressing concerns for the treatment of Uighurs in China. A lesser-known example was Finland player Riku Riski, who refused a national team call-up to play in Qatar, for “ethical reasons”.

The last couple of years has also seen the emergence of movements like Common Goal, which players including Alex Morgan have joined, pledging 1% of their earnings to a central charitable fund. As well as the philanthropic aspect, smarter players (and their agents) will also appreciate how a social conscious can boost an individual brand.

A crucial issue in the next decade will be climate change, and it’s one soccer has yet to address. As the effects on the environment intensify, some players may feel forced to act. How long before certain players refuse to fly to away fixtures?

Soccer’s booming popularity means buying a club is still an attractive proposition for those with deep pockets. But it’s not an easy business. And it’s not easy to make money.

A trend that I think will grow in the next decade is ‘groups’ of clubs, owned by a single or team of investors. The best-known example is the City Football Group. Manchester City is the flagship club, with seven other clubs from around the world wholly or part owned. A sale of 10% of the group in November gave City Football Group a value of $4.8 billion. 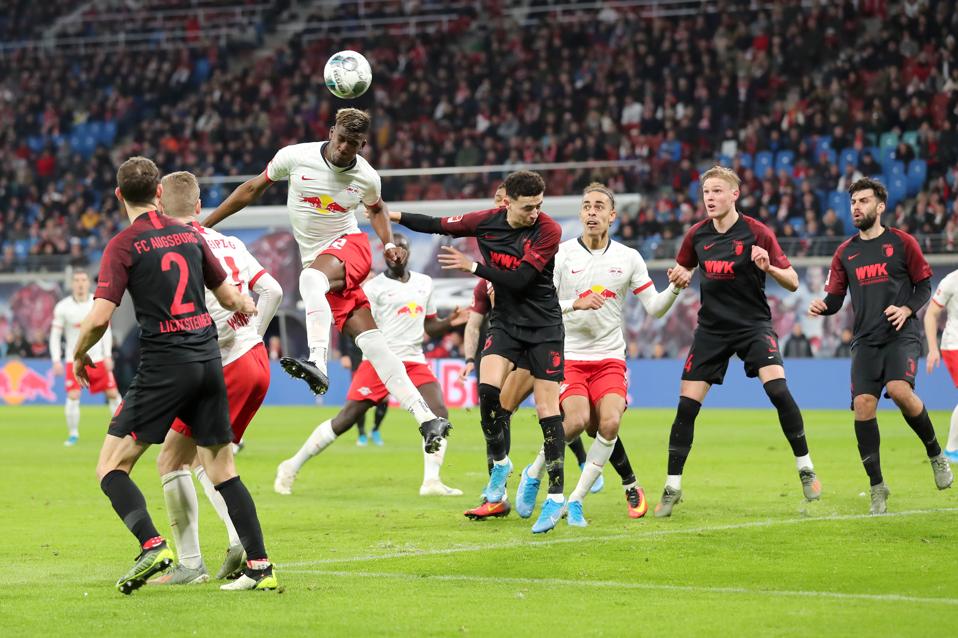 The business sense is that through owning more than one team, it is easier to make money. Swiss soccer executive Ahmet Schaefer, who has established a small “alliance” of clubs told me in March: “We believe that through an alliance, synergies can be exploited and the overall value which is generated is ultimately greater than the individual values.”

Even so, soccer remains a challenging business if returns are the main focus. But that doesn’t mean people won’t keep trying.

6 Tips To Keep Your Restaurant Profitable In...

Should You Wait Until After The Election To...

The 7 Steps to Keyword Research