Breaking
What You And Your RTO Business Need To...
4 SEO Trends for Websites You Should Not...
3 Reasons Why Desk Booking Is Rising In...
8 Tips to Play & Win at Online...
How can software benefit facility management?
Do Professional Casino Players Pay Taxes for the...
Becoming a Trading Expert: What Is the Best...
Dos and Don’ts for B2B Organisations in 2022
Should your business be using Machine Vision?
Colour Masterbatch vs Raw Pigments – Which Is...
Keeping your business moving as you expand online
Top Four Celebrities Who’ve Invested In Cryptocurrency
Why is Cloud Computing Tipped to be the...
How to Raise Money for Non-profit Organizations in...
Choosing the right theme for your WordPress Business...
A Guide to Using Celebrities to Promote Your...
Home Business White Castle Is Adding Flippy, The Automated Robot, To Help Cook Sliders And Fries
Business 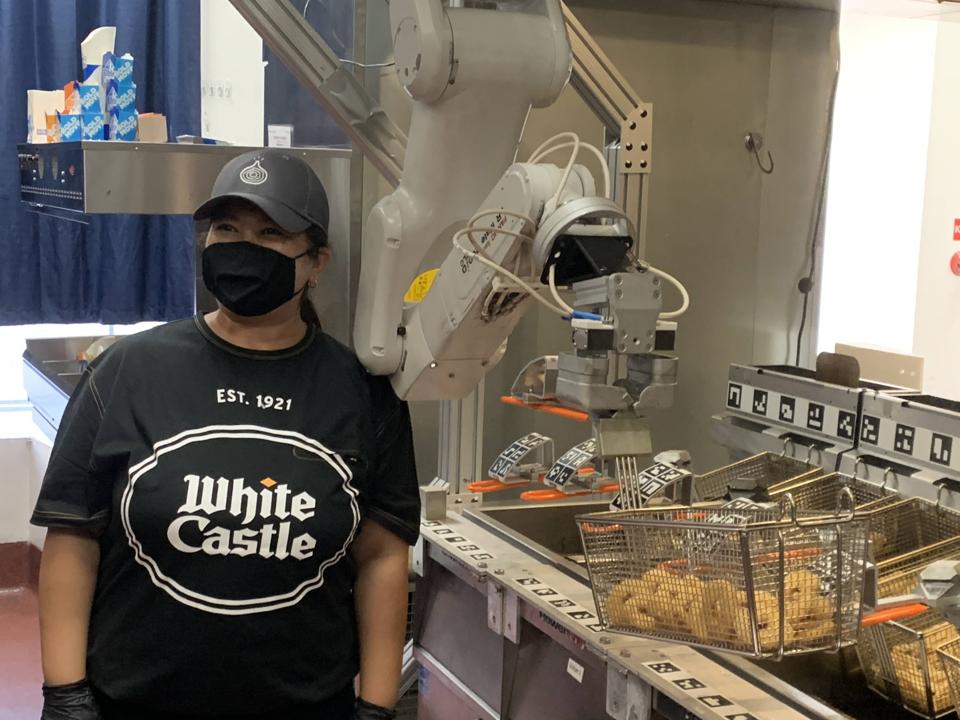 A White Castle employee stands next to Flippy, the automated kitchen robot. White Castle will deploy … [+] the robot in one restaurant in September to measure its back-of-the-house efficiency.

White Castle, founded in 1921, is largely recognized as the first fast food chain in the United States. Now it may very well be the first national fast food chain to deploy an automated kitchen assistant that cooks food.

The 365-unit hamburger chain today announced a pilot with Miso Robotics to add Miso’s new version of Flippy in the back of the house. You may have heard of Flippy, the burger-flipping kitchen robot that made its debut–and headlines–in California in 2018. In January 2020, Miso announced its new “Robot-on-a-Rail” iteration of Flippy, which hinges the robotic arms on an upside-down rail in an effort to take up less space in the kitchen.

At the time of that January introduction, Miso Robotics CEO Buck Jordan said the company was seeing interest from major brands, and predicted more activity in the automation space would happen “in the next 18 to 24 months” based on that demand.

However, as plenty of restaurant executives across the industry have attested, the COVID-19 pandemic has accelerated trends rather significantly.

“COVID-19 hasn’t changed things. It’s just accelerated things. In March, restaurants really started thinking about the future and what that new normal would look like. In March, our phone started ringing off the hook,” Jordan said.

White Castle is one such company that started making decisions in hyperdrive, though the two companies were in talks before the coronavirus was identified.

“We were on this path pre-COVID, but COVID caused everybody everywhere to reconsider everything they thought to be true. For us, this is the direction to go,” said Jamie Richardson, White Castle’s vice president of Government and Shareholder Relations. “We’ve been around for 99 years and one of the many tricks we’ve learned in that time is that great tools empower people to do an even better job. We think this could be a great tool. We’re a willing partner.”

The idea of automation in the restaurant space isn’t new. Smaller concepts like Ono Food Co. have leaned heavily into robotic technology, while giants from Pizza Hut to McDonald’s have also dabbled in automation.

The difference this time around is the additional motivation from an industry forever changed by a pandemic. Prior to COVID-19, technology like Flippy could be leveraged to fill labor gaps in a then-historically low unemployment environment. Though that environment has quickly changed, rising labor costs have not and gaps remain for weary, cash-strapped operators.

Still, a question that has come up plenty of times is whether or not automation will replace human labor. Jordan insists that’s not the case here. Flippy’s ROAR technology is designed to reallocate back-of-the-house labor by doing some of the kitchen work, like steaming burgers or frying fries, autonomously. This will theoretically shift that labor to other needs around the restaurant.

“There is a massive amount of demand for front-of-the-house employees and a better level of service right now, and you can’t do that unless you free up something else,” Jordan said.

Further, we’re now squarely in a new era in which safety, facilitated by guidelines like social distancing, is critical for operators and customers alike.

“Can you imagine trying to social distance in a tight QSR kitchen space? This helps that. It also reduces human contact with food during the cooking process,” Jordan said. “There are enough challenges facing QSR right now and automation is best suited to solve many of them.”

Some of those challenges are a bit more subtle, like accuracy or quality consistency. The Flippy system also includes artificial intelligence that sort of acts like a kitchen quarterback.

“The technology can watch the grill and know when the grill is backed up, but that the fryer is free. Instead of those fries sitting under a heat lamp while 100 Sliders are taking up the grill, Flippy knows not to dip the fries quite yet, but to wait so that they come out hot and fresh,” Jordan said. “Flippy is able to know what’s going on in different parts of the kitchen and coordinate things.”

The AI not only ensures better consistency, but also accuracy by removing the possibility of human error. It’s also worth noting that as business not only picks back up but is redistributed through a number of relatively new channels, like delivery, Flippy can help with increased throughput.

“There is quite a dance that goes on in the kitchen in terms of order fulfillment and this is designed with that in mind,” Richardson said. “This has the opportunity to build our top line because of speed, accuracy, quality–all of those things that go into customers’ decisions on where to go and where to come back to.”

Of course, this is all part of what the test will or will not prove. That test begins in September in one restaurant in White Castle’s Chicago market. Richardson said White Castle is already “encouraged and expecting great things,” adding that this could be a competitive advantage.

“We have seen that if you invest in the right things it matters, and I think our team members will want to work in an environment where they’ve got a tool that helps them to build sales and get customers,” he said. “This is the most concentrated time of change in our history, and that includes the Great Depression. This [pandemic] has affected mobility, people’s ability to get food, how they get food. When we encounter unexpected circumstances, we push ahead versus pressing pause.”

Will other restaurants follow suit? Since the onset of the pandemic, Jordan said Miso Robotics has “received more requests than we can possibly do.”