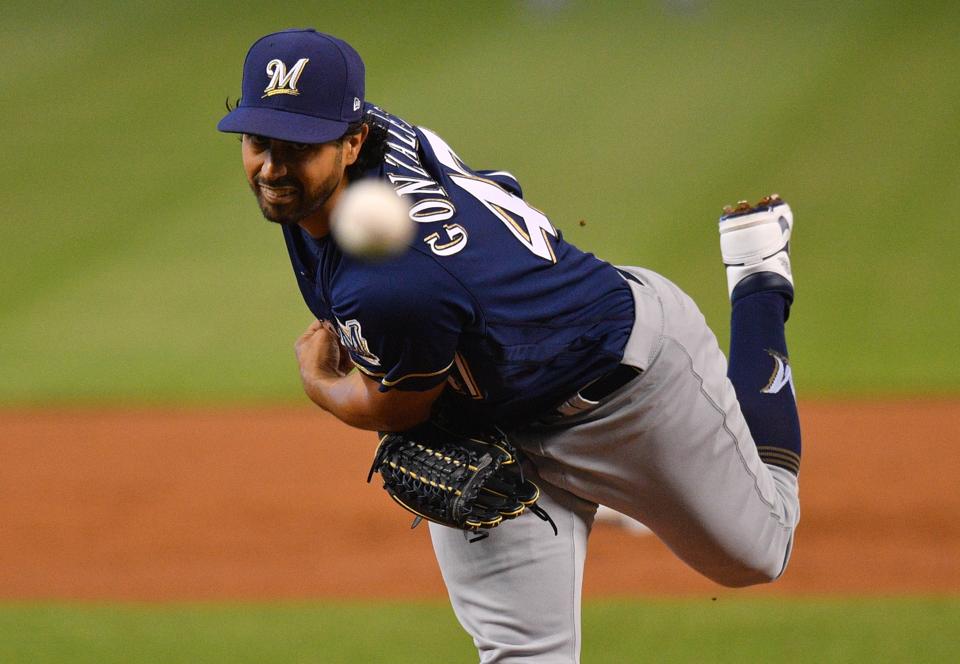 MIAMI, FL – SEPTEMBER 12: Gio Gonzalez #47 of the Milwaukee Brewers delivers a pitch against the … [+] Miami Marlins at Marlins Park on September 12, 2019 in Miami, Florida. (Photo by Mark Brown/Getty Images)

Starting pitcher Gio Gonzalez has come full circle. Originally drafted by the White Sox in the first round fifteen years ago, Gonzalez is reportedly close to signing a deal to return to the team where his professional career started.

Robert Murray, formerly of The Athletic, first had the news of a contract between Gonzalez and the White Sox early Thursday afternoon, which was later confirmed by MLB Network’s Jon Heyman.

The details of the contract are not known yet, and the team had not confirmed the signing as of Thursday evening.

Gonzalez made his debut in 2008 with Oakland and most recently pitched for the Brewers, where he posted a 2.13 ERA in 25.1 innings in 2018 following an August 31 waiver deadline trade from the Nationals, and 3.50 in 87.1 innings for Milwaukee last season. A case of “dead arm” sidelined Gonzalez in June and most of July, but he was able to rejoin the Brewers rotation and make 11 starts in the second half of 2019.

In 2004, the White Sox drafted Gonzalez 38th overall, and the following year included him in the trade that brought Hall-of-Famer Jim Thome to Chicago. And then in December 2006, Gonzalez was traded back to the White Sox with Gavin Floyd in exchange for Freddy Garcia. In January 2008, the White Sox shipped Gonzalez to the Athletics, where he would debut in the majors later that year.

Gonzalez adds depth to a talented but young Chicago rotation. The group led by Lucas Giolito lacks experience, so adding Gonzalez to the mix fills out the starting corps while leaving room to add further.

Additionally, the reunion of Gonzalez and catcher Yasmani Grandal — who signed with the White Sox for four years, $73 million in November — may have played a role in making Chicago a more desirable landing spot for Gonzalez. The two played together in Milwaukee in 2019 and apparently have an off-the-field friendship as well.

The White Sox may still add to their rotation further, even after signing Gonzalez. Bruce Levine of Chicago’s 670 The Score reported Wednesday that they are still in on Dallas Keuchel and Hyun-Jin Ryu.

Which Data-Rich Industries Will Thrive In The Age...

Seven Practical Workplace Steps To Prepare For A...

Solving The Homeless Crisis Through Business