WHO Must Push For Lower Speed Limits To Ease Pressure On Virus-Impacted Hospitals, Urge Experts 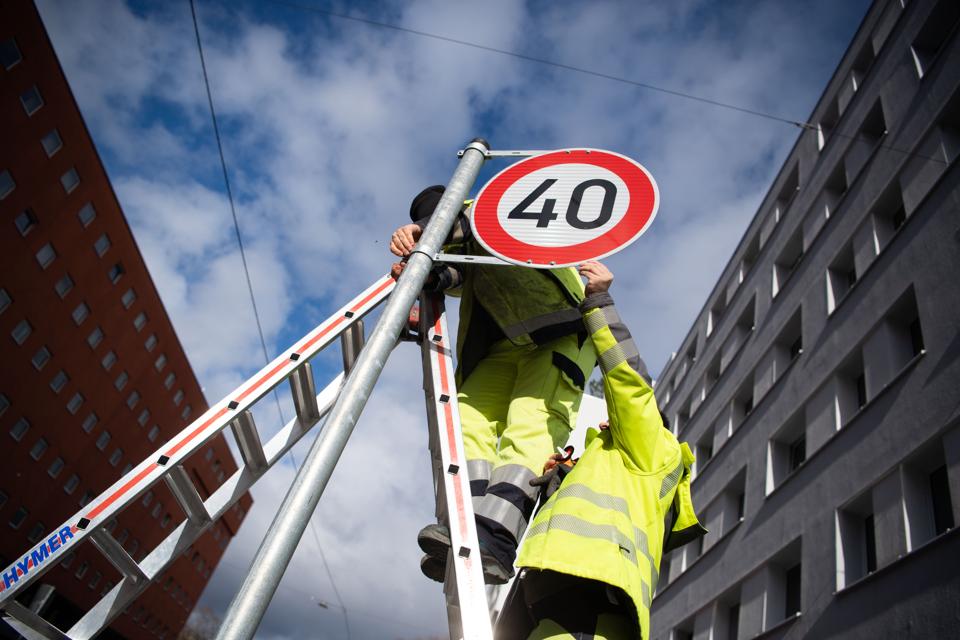 Medics and other experts are calling on the World Health Organization (WHO) to recommend that national governments should lower speed limits on their roads as a means of reducing hospital admissions during the coronavirus outbreak.

Many countries have introduced lockdown measures that have resulted in reduced road usage. Some motorists are speeding on the newly empty roads, risking their own lives and endangering pedestrians and cyclists as well as other motorists.

“I’ve been cycling to the front line in an NHS hospital,” says Sunil Bhopal, a clinical lecturer in population health pediatrics at Newcastle University.

“I’ve been worried by how fast the cars are speeding past me now; it’s changed out there.”

Bhopal, who is also an honorary assistant professor at the London School of Hygiene and Tropical Medicine, wants WHO to advocate for speed limits to be lowered, but also believes national governments could be prime movers.

“I think the U.K. government can take the lead on this—they can do it if they want to.”

Bhopal was coauthor of a March 24 blog in the British Medical Journal calling for several emergency public health interventions to prevent the NHS from becoming overwhelmed by COVID-19.

“In England alone, there are around 35,000 non-fatal admissions to hospital every year related to road traffic accidents,” the authors explained.

“More than one in 10 of these are serious and likely to require intensive support, including anesthesia and surgery.”

The blog called for national speed limits to be reduced by 10mph to 50mph during the crisis and for a blanket 20mph speed limit in all urban areas.

The Royal College of Paediatrics and Child Health and the Royal Society for the Prevention of Accidents are among the bodies that support such measures, said Bhopal and his coauthors. 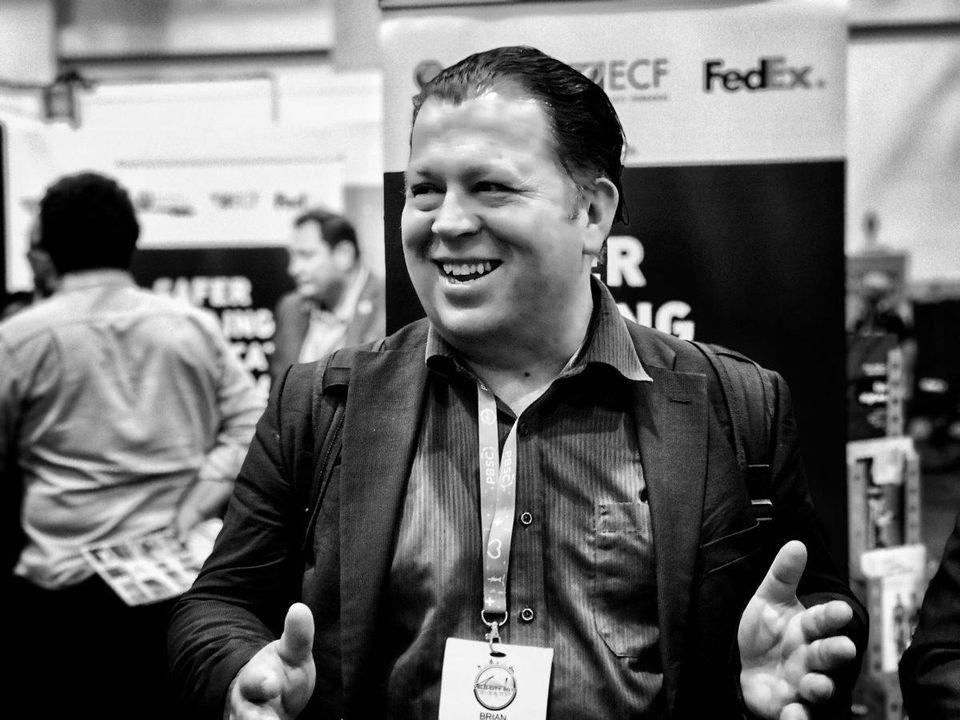 “But right now we’ve got lots of key workers cycling and walking to work. And we have got kids out there walking for daily exercise. We have to keep them all safe—the case to reduce speeds has never been stronger.”

Deegan, who works for the London design practice Urban Movement, would like WHO to advocate for reduced speed limits so that national governments felt able to put in place road safety measures many campaigners have long fought for.

“Now’s the time to try things and test stuff out and see what the results are,” suggests Deegan, who is an advisor to Chris Boardman, the former Olympic champion turned Greater Manchester cycling and walking commissioner.

“It’s not the time to have a six month debate over whether we should do it—let’s give things a go now. Last week, coughing in someone’s face wasn’t an offence that would land you in prison—it is now. Driving too fast is much more anti-social than that. We don’t need any crashes now that the hospitals are filling up.”

Action is needed because “some motorists are really enjoying having the roads to themselves,” argues Deegan.

“It’s pretty intimidating. As a society we should be strongly discouraging speeding during this crisis.”

“It’s critical that we quickly connect the dots between road deaths from collisions and COVID-19 deaths, which increase significantly when our hospital capacity is overwhelmed,” says urbanism consultant ⁦Brent Toderian⁩, Vancouver’s former director of planning.

The two feed each other in a deadly partnership, he believes.

“You’re now more likely to die from a crash if you can’t get medical help, and crashes add to the pressure on hospitals leading to more COVID-19 deaths.”

Having fewer cars on the roads is leading to faster driving, adds Toderian⁩.

“In the absence of immediate action on enforcing lower traffic speeds, it’s a perfect recipe for more death,” he warns. 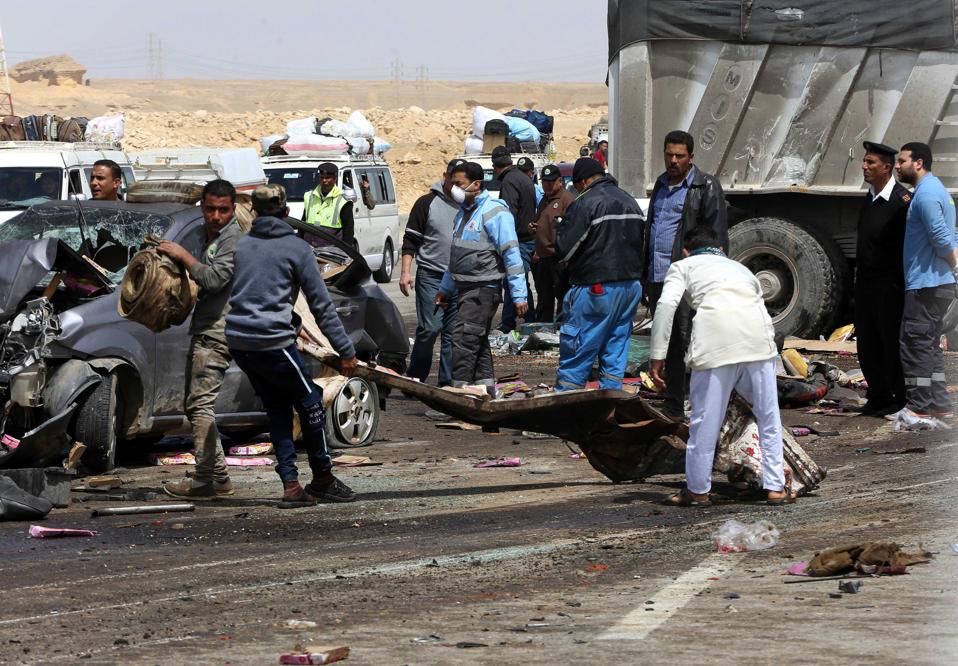 Egyptians clear the wreckage of a car crash on a highway near the town of al-Saff in Giza province, … [+] north of the capital Cairo on March 26, 2020, which left several people killed and wounded. (Photo by KHALED KAMEL/AFP via Getty Images)

“AT THIS TIME of unprecedented pressure on global health resources it is vital that every action is taken to reduce background demand for treatment,” says U.K. transport consultant Phil Jones, head of 80-strong engineering firm Phil Jones Associates.

“Road traffic casualties are the world’s neglected pandemic,” he points out.

“All efforts need to be targeted at treating the sick and halting the spread of the disease,” he says.

While politicians around the world have taken bold steps to keep their citizens at home—curtailing mobility to save lives—they may balk at reducing the so-called freedom of the open road.

“A clear statement from the World Health Organization calling for reduced speed limits in response to the global emergency would help give essential cover to those politicians that need it,” stressed Jones. 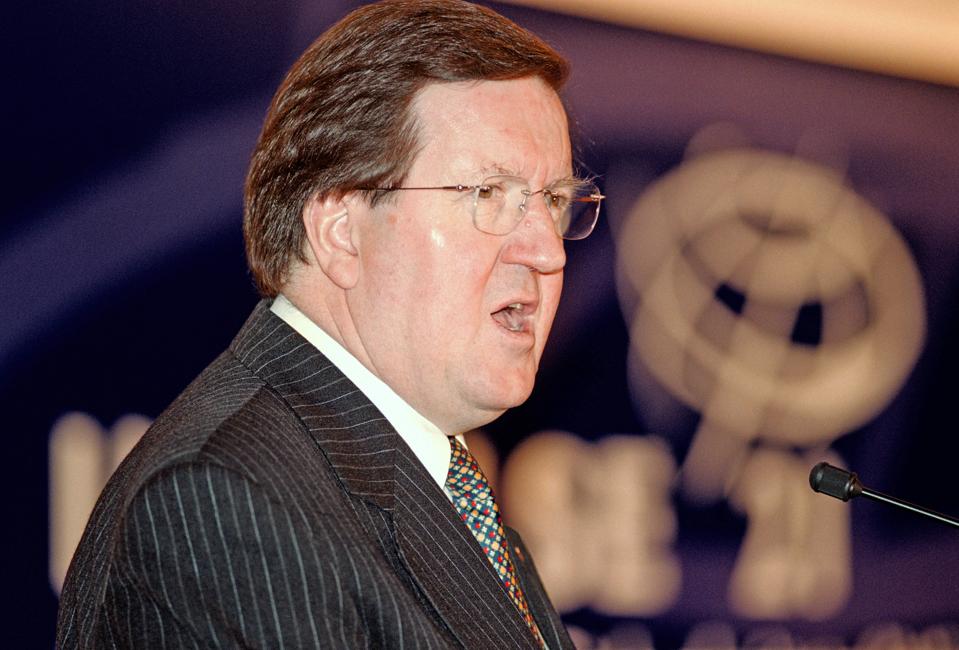 One politician to have raised the issue is Labour peer Lord Robertson, a former defense secretary and Secretary-General of NATO from 1999 to 2004. Writing in House, the U.K. parliament magazine, he urged his fellow lawmakers to support slower speeds.

“If we want to free up intensive care beds today for coronavirus victims tomorrow,” he wrote, “there is one policy guaranteed to help worldwide: Slow Down!”

National governments still need persuading. A statement from the U.K.’s Department for Transport says, “while we have no plans to change national speed limits in England, local authorities have the power to set speed limits in their area.”

The statement continues: “Local authorities and Highways England are best placed to make their own decisions about setting speed limits which reflect the needs of the local communities.” 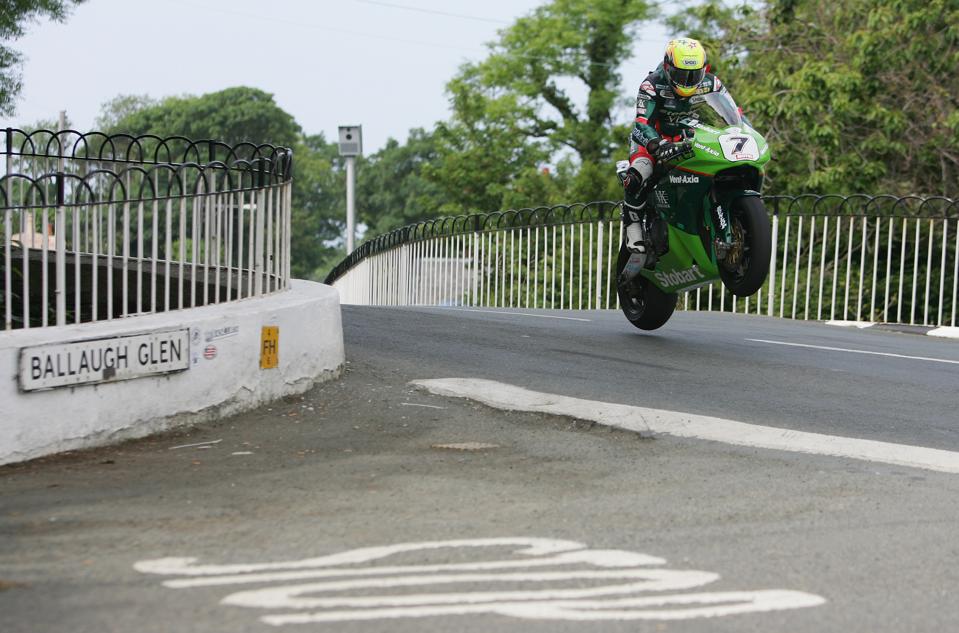 The Isle of Man is not known for slow speed initiatives. Quite the opposite—the annual TT motorcycle … [+] race takes place on public roads. (Photo by Ian Walton/Getty Images)

“The move is designed to minimize the risk of [crashes] leading to bed spaces being occupied as the Island’s health service plans for a spike in the number of people needing hospital treatment,” says a statement on the Isle of Man’s government website.

The island—which generally has no national speed limit—is famous for an annual against-the-clock cross-country motorcycle race on public roads. An Isle of Man police spokesman said the move to impose a speed limit of 40mph would “ease the demand on our health service and hospitals.”

U.K. police forces have reported examples of excessive speeding on the nation’s roads since the government’s introduction of a partial lockdown on March 24.

“With the impact of COVID-19 taking effect, we are seeing less congestion on London’s roads,” says Detective Superintendent Andy Cox, lead for Transport for London’s Vision Zero campaign, which aims to eradicate deaths and serious injuries from London’s roads.

However, he adds, “evidence is emerging that this has led some drivers to drive at very high speed risking their life and that of other road users.”

Cox cited the extreme example of a motorist caught driving at 134mph in a 40mph zone.

“Such behavior is unacceptable,” he admonishes, “and in the event of a serious collision will impact on the NHS, Fire services, and police abstracting them from working on COVID-19-related issues.”

London’s ambulance service reported that it had seen a lift in motor vehicle speeds. “With quieter roads, we have witnessed an increase in speeding motorists,” tweeted the service on March 27.

“COVID-19 is not a license to speed,” said the force’s Col. Matt Langer, adding that “motorists [must] to do their part to make sure hospital beds are available for those dealing with COVID-19.”

ALMOST 1.35 MILLION people die on the world’s roads each year, and another 20 to 50 million are seriously injured, according to the World Health Organization.

The newly energized body—now seen, including by many former detractors, as a critical bulwark against COVID-19—was the co-organizer of an international road safety conference in February. The Third Global Ministerial Conference on Road Safety, hosted by the Swedish Government in Stockholm, was attended by 1,700 delegates from 140 countries, including royalty, ministers of transport, health and interior from Member States, and senior officials from UN agencies.

Among the key conference resolutions was a plea to rein back speed on the world’s roads. This Stockholm Declaration—signed up to by every attending country, except the U.S. which objected to road safety being linked with climate change issues—wanted countries to “focus on speed management,” with increased enforcement of existing speed limits and “mandate a maximum road travel speed of 30 kph (18.6 mph) in areas where vulnerable road users and [motor] vehicles mix.”

The 1.35 million lives lost every year due to road crashes was “an outrage,” said WHO director-general Tedros Adhanom Ghebreyesus during the conference.

“It is an unacceptable price to pay for mobility,” he stated.

Etienne Krug, director at WHO’s Department of Social Determinants of Health, said that if motorized road transport did not yet exist, “no sane government would permit it.” 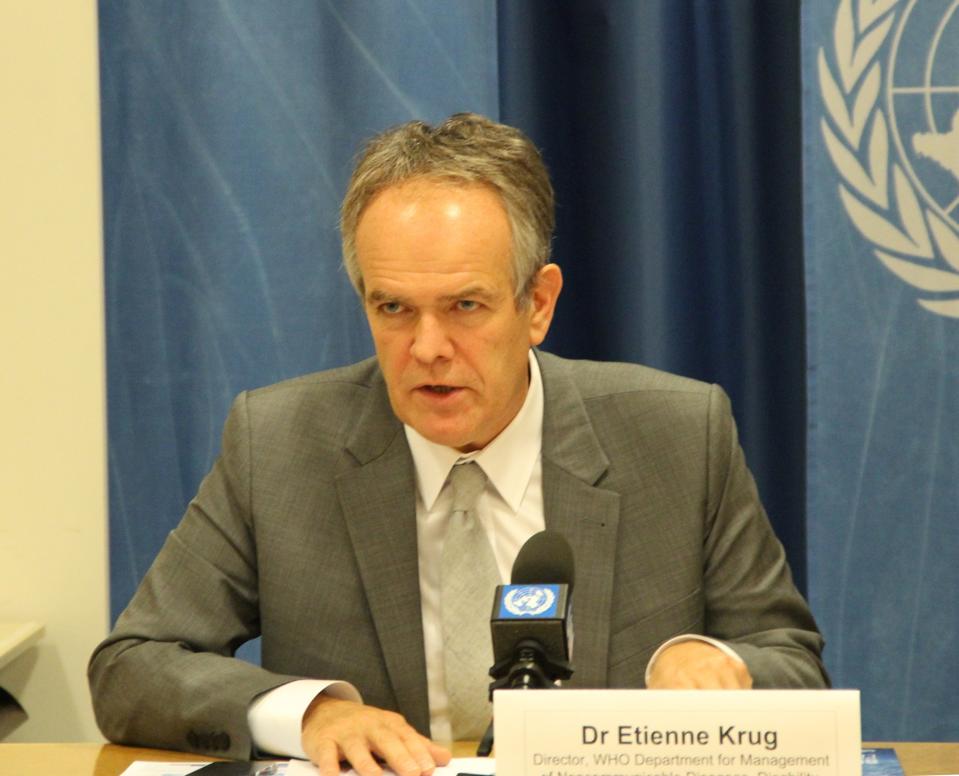 Krug said that the Stockholm Declaration could enable the world to “move quickly towards a safe, healthy, and clean transport system for everyone.”

That was then; this is now. Officials at the World Health Organization are rightly focused on tackling the virus pandemic. They are no doubt loathe to advocate for what critics might consider being unconnected to COVID-19, but, say experts, people around the world have now been conditioned to accept rapid and dramatic change and are currently receptive to messaging from trusted bodies. Seize the moment, urge medics and more, by adding a speed limit reduction to COVID-19’s existing preventative recommendations such as hand-washing and social distancing.

“WHO has to tread a number of very fine lines at the moment,” the expert, who wished to remain anonymous, told me.

“The COVID team might prefer to keep focused on the main messages to avoid diluting the communications.” 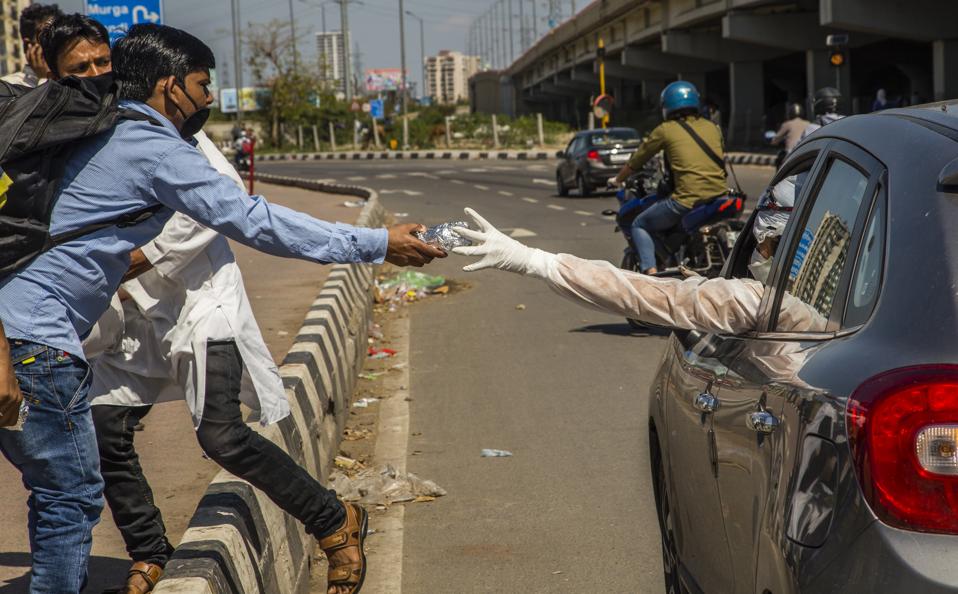 Volunteers distribute food and water to Indian migrant workers as they to wait to board buses to … [+] return to their native villages as a nationwide lockdown continues in an attempt to stop the spread of coronavirus (COVID-19) on March 28, 2020 in Ghaziabad, on the outskirts New Delhi, India. (Photo by Yawar Nazir/Getty Images)

AS THE WORLD races to find a vaccine for COVID-19, one already exists for preventing road deaths: slower speeds. In 2017, Professor Alfred Sommer, who led breakthrough work on Vitamin A supplements, said: “When we found the cure for vitamin A deficiency, we administered it to millions of children.”

Sommer, Dean Emeritus at the Johns Hopkins Bloomberg School of Public Health of Baltimore in the U.S., which is one of the institutions now leading the world’s understanding of COVID-19, added: “We have the cure for unsafe roads—low speeds. It is time we administer it.”

The novel coronavirus SARS-CoV-2 that is believed to have originated in Wuhan, China, in late 2019, has caused outbreaks of COVID-19 across the world. As of March 27, there were nearly 510,000 officially confirmed cases and 23,335 deaths from pneumonia caused by the virus, according to the World Health Organization’s Situation Report.

Bear Market For Stocks Continues Even As The Dow Holds 18,000

Now Is the Time For U.S.-China Collaboration, Not...

‘Belgravia,’ Is Similar To ‘Downton Abbey,’ But Tells...

The Sales Podcast – The Self-Reliant Entrepreneur