Breaking
The Impact of Internships in Marketing
3 use cases of chatbots for critical services
How To Make Working From Home Appeal To...
Tips on How to Design an Office Space...
4 Tips To Help Build Amazing Customer Relationships
How Are US Pension Funds Responding to the...
Benefits of second-hand cars for your business
4 Reasons Why Your App Needs To Undergo...
Your Guide to Online Marketing
How to find a Solicitor in London
5 car tyre and safety tips for a...
Everything You Need to Know About Corporate Social...
Is Adaptive Leadership the Key to Motivating Employees?
Why business events are set to return with...
Business events set to return with a bang!
Expanding Internationally: 5 Things to Consider for eCommerce...
Home Business Why Alex Ovechkin Is The Right One To Break The Great One’s Goal Record
Business 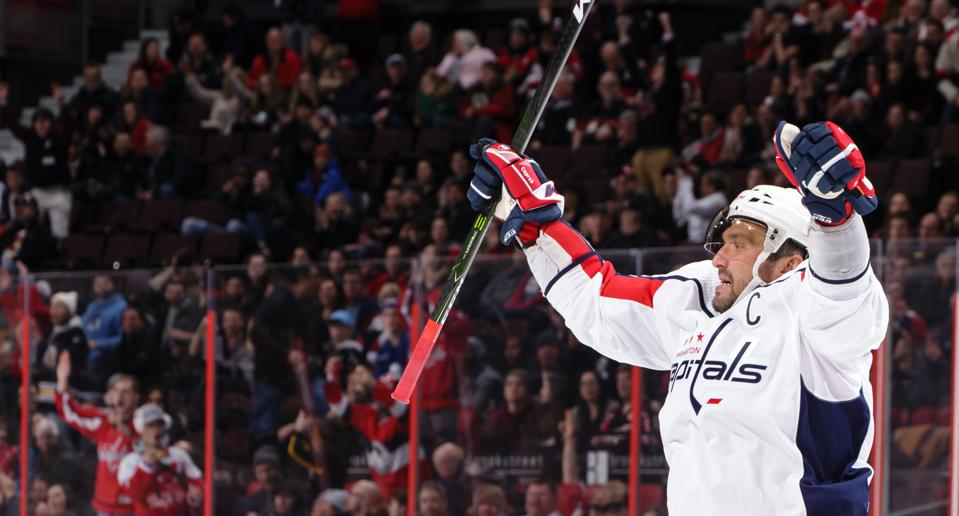 OTTAWA, ON – JANUARY 31: Alex Ovechkin #8 of the Washington Capitals celebrates his third period … [+] empty-net goal, moving him past Mark Messier into 8th on the all-time NHL goals list, in a game against the Ottawa Senators at Canadian Tire Centre on January 31, 2020 in Ottawa, Ontario, Canada. (Photo by Jana Chytilova/Freestyle Photography/Getty Images)

Alex Ovechkin continued his assault on Wayne Gretzky’s career goals mark of 894 when he scored two goals against the Ottawa Senators on Friday night in a 5-3 victory.

The Washington Capitals sniper passed Mark Messier (694) for sole possession of eighth place on the NHL’s all-time goals list with 695.

At age 34, Ovechkin is showing no let up as he pursues Gretzky’s mark, which was once thought impossible to reach in this tighter-checking era with bigger goalies and bigger goaltender pads.

The Russian star is only 200 goals away from breaking Gretzky’s record, and it’s still a long shot because he would need five more seasons of reaching the 40-goal mark to set the new standard. Ovechkin would be approaching 40 years old, and it’s hard to believe he could continue this pace for another five years. But only three times in his career has Ovechkin failed to hit the 40-goal mark over a full season, so nobody should be betting against him.

If somebody is going to break Gretzky’s record, there is no other player today who is more deserving.

Ovechkin is perhaps the purest goal scorer the league has seen since Mike Bossy. And while the bulk of his goals have come on his patented one-time slap shot, particularly on the power play, Ovechkin has shown this year that he’s a threat to score from any area of the ice. 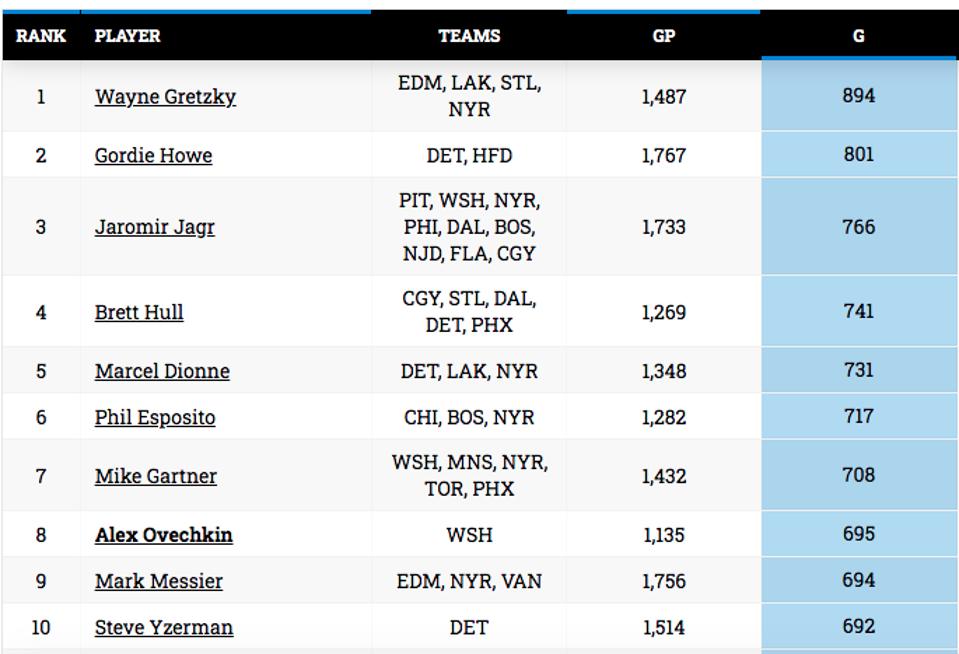 Gretzky was never known for his shot, and the fact that he racked up 894 goals is still stunning all these years later. The Great One was the best playmaker this game has ever seen, and it will be a long time before anyone approaches his assist record (1,963) or points record (2,857).

But the fact that we are talking about Ovechkin breaking Gretzky’s career goals record is something no one would have thought possible a couple of seasons ago.

But Ovechkin is a big body who is in great shape. He is unlikely to succumb to the wear and tear of an 82-game season. He has been spared serious injuries over his career and he seems more hungry than ever.

Look at this pace.

The superstar winger has 11 goals in his past five games, a first in his NHL career. It is also the first time in his career that he has recorded four multi-goal games in a span of five appearances.

Ovechkin is on pace to go from 600 to 700 goals in only 154 games, which would mark the fewest games to make that leap for any member of the 700-goal club, the NHL reported.

With 37 goals on the season, Ovechkin is tied with Boston’s David Pastrnak for the league lead. Ovechkin is already an eight-time Rocket Richard Trophy winner given to the player who scores the most goals over the course of a season.

Ovechkin is a shooter pure and simple, with a quick release. Against Ottawa, he had a season-high 11 shots on goal.

After his second goal, which was scored into an empty net late in the game, fans in Ottawa took up chants of “Ovie, Ovie.”

“It’s cool when we’re in different buildings and to see other fans cherishing that moment,” Capitals defenseman John Carlson said. “It’s a big part of history, and I think he deserves the cheering and the applause for what a great career he’s had so far.”

Fans and players around the league have grown to respect Ovechkin as a true superstar. Despite a strong work ethic, Ovechkin was once thought to be a selfish player who didn’t have the leadership ability, like a Sidney Crosby, to take a team to the Stanley Cup.

All that changed two seasons ago when Washington got past their nemesis, the Pittsburgh Penguins, and then cruised past the Las Vegas Golden Knights for the Stanley Cup. Ovechkin was named the MVP of the playoffs and proved without a doubt that he is the heart and soul of this team.

Ovechkin’s gap-toothed smile and the boyish exuberance he showed in carrying the Stanley Cup around in celebration made him more popular than ever.

Of course, Gretzky was aided in his goal-scoring exploits by scoring an unbelievable 92 goals in the 1981-82 season, and he totaled more than 60 goals five times in his illustrious 20-year career. Ovechkin has surpassed 60 goals only once in his 15-year career, so Ovechkin has fewer spectacular seasons, but more consistency.

What’s interesting about this season is that Ovechkin’s scoring percentage is a staggering 15.4%, which he’s never been able to sustain over a full season. His career average is 12.7%.

Adding wind to his sails, Ovechkin is shooting more than he has in several years. He is on track to take 385 shots this season and, at his current shooting percentage of 12.7%, he will track about 46 goals, putting him at 704 by the end of this season and 190 goals away from tying Gretzky.

Even if Ovechkin’s shooting total drops to around 328, which is what he has averaged for the previous three seasons, and he maintains his career shooting percentage of around 12%, Ovechkin can expect to score close to 40 goals a season.

All he has to do is keep that up for five more seasons, and he will be crowned the new career goal-scoring champion in the 2024-25 season, unless there is a work stoppage. (The current deal expires Sept. 15, 2022).

The path ahead for Ovechkin seems improbable, but not impossible. He needs luck and to continue to stay healthy. But if he ends up dethroning Gretzky, no one should begrudge him this record.

Rarely in his career has Ovechkin scored any cheap goals. His goals are mostly beautiful to watch and often the product of hard work and precision. He would be a worthy goal-scoring king.