Breaking
6 Questions To Practice Gratitude This Thanksgiving
Report: Facebook Tweaked News Feed After Election Day...
End The Month Strong With These Top Value...
From Maths Failure To Global Educator: How Knowledgehook...
What Will Customer Service Look Like In The...
‘Call Of Duty: Modern Warfare’ And ‘Warzone’ Season...
3 Lessons Startups Can Learn From Quibi’s Failure
You Aren’t An Imposter, No Matter What Your...
Altria Stock Up 30%; What’s Next?
5 Ways Essential Industries Allow Flexibility And Lower...
Kenyan Study Supports Impression That Covid-19 Spread Weaker...
Hyundai’s Hydrogen Car Ambitions Get A Boost From...
Ripple’s XRP Has More Than Doubled In Price...
John Kerry As Presidential Climate Envoy: Virtue Signaling...
Increased Risk Of Chronic Conditions Associated With Early...
Top ETFs This Week As Dow Ends Day...
Home Business Why “Bubble Dining” Pods Are A Terrible Idea During The Covid-19 Coronavirus Pandemic
Business 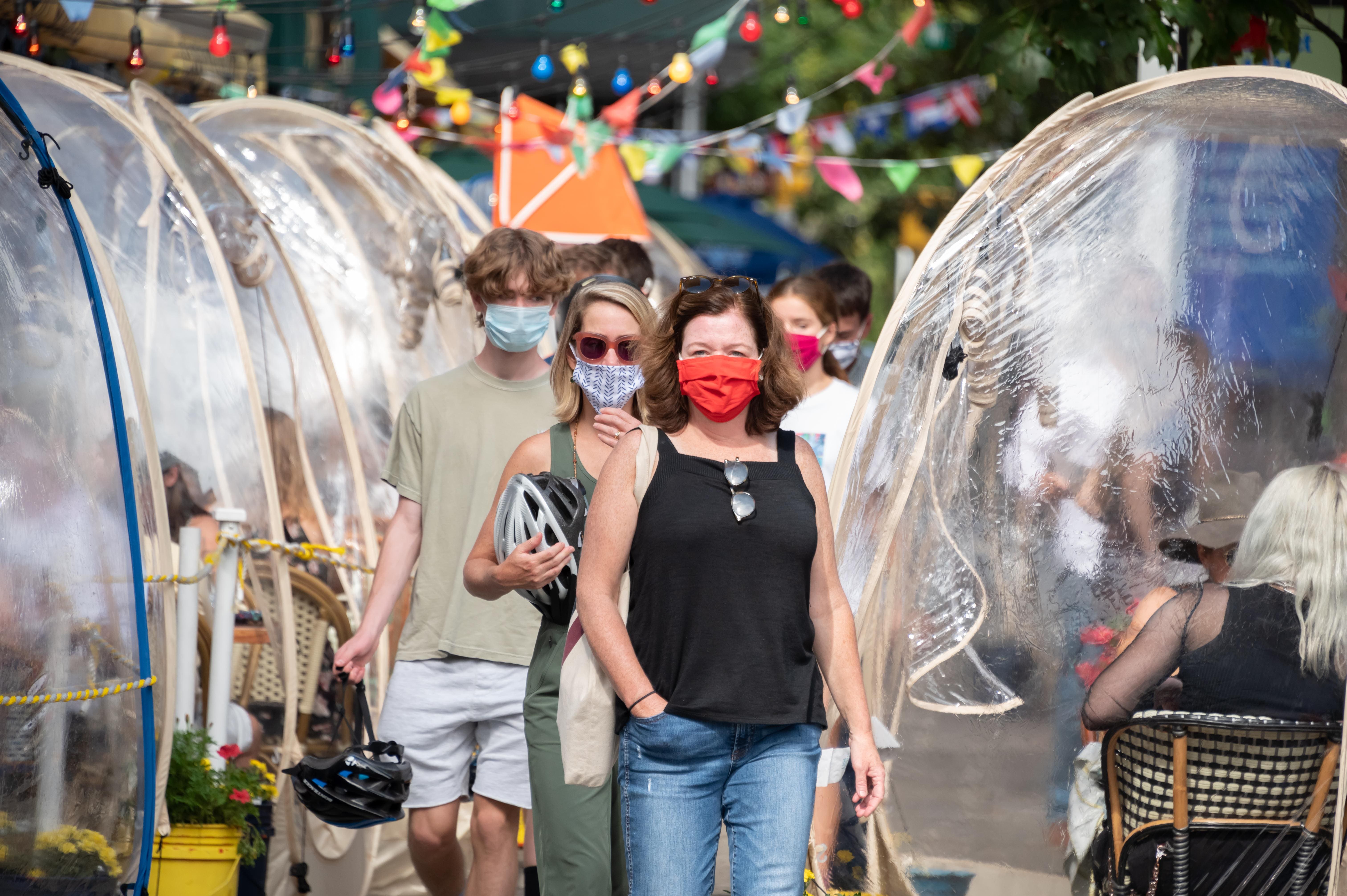 Think of an attempted solution to a problem that is so bad, it makes everything much worse. Like getting a flat tire and popping the other three for good measure or perhaps burning a corner of a frozen pizza and then deciding to set fire to it just so it’s equally burned throughout.

New York re-opened indoor dining as of 30th September, but with 25% capacity limits and other attempted safety guidelines in place. Some restaurateurs in the city have also reportedly been using “bubble dining pods” on the sidewalk, with experts raising significant concerns that these “pods” could be highly risky environments for Covid-19 transmission.

Bubble dining is not a new concept with restaurants and cafes increasingly turning to the pods to seat patrons outside in less hospitable weather. The clear plastic tents are placed on the sidewalk with guests sat at tables inside and servers going between the pods. On one video posted from New York, condensation can be seen fogging up the insides of the structures.

This condensation is likely to mainly come from the water droplets that are being exhaled by the patrons inside while they eat, drink and chat. Unless you’ve been living in an exceedingly remote area for the past 7 months, most people will be aware that it is these droplets which are responsible for transmitting the SARS-CoV2 virus from person to person.

Should these “dining bubbles” be used during the pandemic?

“I think it depends who’s in the bubbles. Those [on the video] look pretty much waterproof and the obvious concern is ventilation,” said David Fisman, Professor of Epidemiology at University of Toronto in Canada and a practicing internist. “But, if you are meeting friends, and that’s as poorly ventilated as it looks, I’d pretty much call that a boutique Covid party! If you’re in there with your household bubble you’re not exposed to anyone you’re not exposed to anyway,” said Fisman.

Socializing with others outdoors with distancing maintained is thought to be much lower risk than doing similar activities inside. This is largely due to better ventilation and airflow, meaning that any exhaled particles containing virus would be more quickly dispersed.

One of the main issues with these bubbles is that they seal people in an environment which is even smaller and more poorly ventilated than they would likely be inside the restaurant. Ergo, if somebody in the bubble was exhaling virus, it would reach a very high concentration very quickly.

“It’s unclear how this is different from indoor dining, if the people dining are not from the same household or quarantine pod,” said Angela L. Rasmussen, PhD, a virologist in the faculty of the Center for Infection and Immunity at the Columbia Mailman School of Public Health.

In many scenarios not involving close contact, prolonged exposure is thought to be needed to transmit the virus, but if concentrations inside the bubble were high enough, this could also pose a risk to staff going in and out of the bubbles.

“If that [the dining bubble] is poorly ventilated and the server is going in and out I’d imagine (I’m not an HVAC engineer) that you’d create substantial risk for servers,” said Fisman.

Exposure to high concentrations of the coronavirus have been linked to more severe disease – a possible reason as to why so many healthcare workers have died from the disease, particularly early on in the pandemic where there were widespread shortages of personal protective equipment.

The manufacturer description of the tents featured in the video from NYC does indicate that there are some ventilation areas at the top, but the structures would seem to be mostly sealed with little airflow or ventilation. Another concern would be the same tents being used by multiple groups of people without being thoroughly sanitized and ventilated between uses.

But, not all plastic bubble dining pods are created (or used) equally – some pictures from New York show the sides of the pods open, likely allowing some ventilation through the tents.

However, this then renders the question of why they are needed in the first place in this situation and why a waterproof umbrella will not suffice, allowing as much ventilation as possible, while providing some protection against unpleasant weather.

As restaurants and bars continue to struggle financially, is there any way to make outdoor dining both safer and weatherproof?

“I think awnings and heaters would be the way to go,” said Fisman.

“This is an enclosed, poorly ventilated space. This would be safer if it were outdoors with heaters,” said Rasmussen.