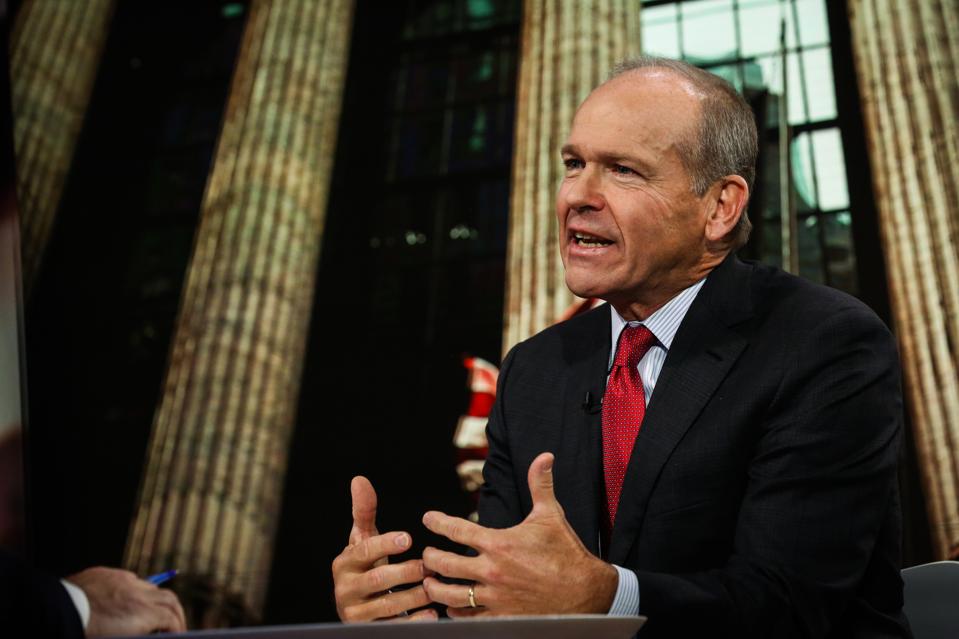 Assume the replacement of Dennis Muildenburg as Boeing’s CEO has been in the works for a while. Job #1 for the CEO of a production-focused company is to keep the planes from falling down. There was nowhere for Muildenberg to hide when not one but two of Boeing’s 737 Max 8s crashed and killed all on board. He’s been at Boeing 34 years and CEO for the last five. He had to go. The question was when should he go and who should take his place.

David Calhoun. Seems like the board is giving him every chance to succeed. Still, the task is daunting – which is why his onboarding is a work in progress. He’s been selected. He’s been through the private part of his fuzzy front end. Now he’s going through the public part of that. He knows what to do. The screaming issue is how much damage has been done to the Boeing brand and its people’s self-confidence.

What Boeing and Calhoun have done well so far

Boeing and Calhoun get credit for a good choice and phased entry. On paper, Calhoun has what it takes. He grew up and spent twenty-six years at GE when it was an “Academy” company, running several business units and exiting as Vice-Chair. Since GE he’s been CEO of Nielsen and then head of Blackstone’s Portfolio Operations team, dealing with several tough situations. He’s an experienced operator, thinker as co-author of the book “How Companies Win,” and leader.

He’s phased into this role well, first joining Boeing’s board, then becoming Lead Director in April 2018, Chair in October 2019, and was just announced as CEO effective January 13, 2020.

This has allowed him to learn about Boeing from a board perspective, start thinking about what he was going to do as CEO, and start migrating key relationships from the moment the board decided he should take over as CEO and before they announced it – the private part of his fuzzy front end. Now that he’s been announced, he has a couple of weeks to strengthen those relationships as put things in place before he officially takes over.

How big is the risk?

This shouldn’t have happened. Muildenburg is an engineer who grew up at Boeing and seeming oozes the mission from every pore. As Muildenburg told the Telegraph’s Kevin Coyd in 2017,

“Ultimately, people’s lives really do depend on what we do, and this drives the sense of excellence in how we do it. Our mission is an important and worthy one.”

Further, Muildenburg’s top tip for leadership is all about reacting:

“1 REACT QUICKLY Events can change everything. So must you.”

As I wrote in this publication last week, “A production-focused organization’s main cultural driver should be stability. People should know what they are expected to do and get it done consistently and reliably.”

Muildenburg and his team demonstrably failed to get their jobs done reliably. Then they failed to react when the first plane went down. They blew the crisis management.

Boeing’s problems are both chronic and acute. There’s a chronic cultural risk in that their behaviors don’t match their stated mission and values. There’s an acute risk in that they’ve failed to adjust or communicate well during the current crisis.

Calhoun has been around the block. We have to assume he knows what he’s getting into and has done his own onboarding risk assessment. Recall there are four levels of onboarding risk: relatively low, manageable, mission-crippling, and extreme/insurmountable. For him to have accepted this job, Calhoun must believe the risk is merely mission-crippling and not insurmountable.

This mean he’s identified the mission-crippling cultural issues and has a plan to address those. Know these are going to take time. To make it work, Calhoun has to follow the general steps Lyle Heidemann used at True Value, modified to work for Boeing:

Time will tell whether Calhoun can overcome the mission-crippling risk and restore Boeing’s production excellence. That’s why his onboarding will be a work in progress for a long time.

Click here for a list of my Forbes articles and a summary of my book on executive onboarding: The New Leader’s 100-Day Action Plan.

‘The Hunt’ Was The Unluckiest Movie In Years,...

Ivan Rakitic Defiantly Says He Is Not ‘Sack...

Remember These 5 Avoidable Mistakes To Increase Your...

Protect Your Data From The Inside Out, Trust...