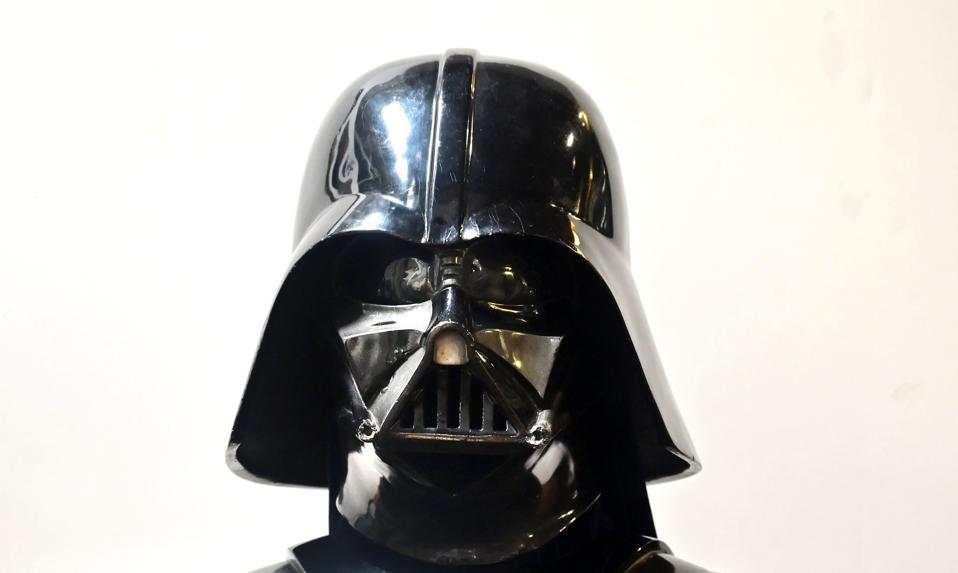 Darth Vader helmet and mask from the film “The Empire Strikes Back.” (Photo by Frederic J. BROWN / … [+] AFP)

There’s just over a week to go until Star Wars: The Rise of Skywalker is released, but online, the wars have already begun.

Stale talking points regarding The Last Jedi are resurfacing in friction-filled comment sections, and even Rise of Skywalker director J.J. Abrams, in an interview with the NYTimes, seemed to echo fan complaints, hinting that The Last Jedi tried too hard to subvert audience expectations:

“… it’s a bit of a meta approach to the story. I don’t think that people go to Star Wars to be told, ‘This doesn’t matter.’”

I’m sure I’ll soon have plenty to say about The Rise of Skywalker, and so will everyone else with an opinion, but I hope the conversation doesn’t escalate as it did during the aftermath of The Last Jedi, which caused a massive fracture between fans and, somehow, turned into an ideological divide.

Personally, I haven’t been the biggest fan of Disney’s Star Wars films; they feel insincere, corporate, and largely forgettable. I don’t think it should be difficult for Disney to create a simple, fun-filled space adventure, but seeing as the Star Wars fan base is so incredibly expansive and diverse, it seems almost impossible to please the majority, especially when contrarians and hot takes attract the most attention.

Spin-offs Rogue One and Solo were fine, and The Mandalorian is great, so far. But the Skywalker storyline is where things get strangely emotional. Luke Skywalker is almost like a folk hero to some, a character that left a lasting impact on public consciousness, along with his two companions, Princess Leia and Han Solo.

Fans really care what happens to this trio, their descendants and their legacy within the Star Wars universe, and Disney’s continuation of their story made many angry and irrational.

Erasing Luke’s original victory so that The Force Awakens could return to the status quo of A New Hope wasn’t a great idea, in hindsight, nor was ensuring that the trio would never appear in the same scene together, alive (a very strange decision, especially for a mega-corporation leaning on nostalgia as a marketing technique).

But anger and divisiveness among Star Wars fans is nothing new – George Lucas’ prequel trilogy was almost universally derided as a major disappointment. Despite featuring an admirably ambitious storyline (the rise of fascism within a democracy), the prequels are practically unwatchable, with dreadful dialogue and a wildly uneven tone.

But The Rise of Skywalker, as the conclusion to the trilogy-of-trilogies, the official end of the Skywalker saga, is guaranteed to be ridiculously divisive. There’s simply no way to satisfy the majority at this point, and with thousands of violently contrasting viewpoints being screamed into social media, one can practically smell Disney’s uncertainty (Palpatine is coming back? Really?).

The Last Jedi stirred up too much bad blood; debating the plot twists of a blockbuster mutated into a never-ending war between ecstatic fans of the movie and furious critics, along with people who had mixed feelings about the movie, but got caught in the crossfire.

YouTube grifters, seizing the opportunity to run with the narrative, churned out hundreds of videos blaming “social justice” for the narrative woes of the sequel trilogy. Which is utterly ridiculous – other than a slightly more diverse cast, what was so incredibly progressive about these blockbusters?

Indeed, there is almost no political commentary in modern Star Wars, other than “The First Order are like Nazis, and Nazis are bad.” There’s certainly nothing to compare with George Lucas’ boldly political themes. But the presence of unhinged misogynists, obsessed with “Mary Sues” and “cultural Marxism,” turned almost every comment section into a cesspit.

Liking, hating, or feeling ambivalent towards a popular blockbuster shouldn’t be interpreted as a political statement – are we doomed to repeat the stupidity of the conversations surrounding Captain Marvel?

We certainly are, but once the stardust fades, I think Star Wars discourse will finally quieten down. After Rey’s parentage is retconned, and Luke Skywalker’s ghost returns to save everyone, or whatever, the tale of the Skywalker clan will be over, and the franchise can finally move on, without worrying about tainting the memory of the original trilogy.

The Mandalorian shows how small-scale stories that explore the crevices of this vast universe can be hugely entertaining, even uncontroversial, especially without being weighed down by popular, pre-established characters.

Personally, I can’t wait to say goodbye to the old Star Wars characters, or for the war between the Resistance and First Order to end; mediocrity shouldn’t be this hotly debated.

WWE May Be Planning A Surprising In-Ring Return...

Is PropTech About To Have Its ‘Man On...

How To Use Creativity And Pattern-Matching To Find...

How To Win With A Service-Focused Strategy