Breaking
What You And Your RTO Business Need To...
4 SEO Trends for Websites You Should Not...
3 Reasons Why Desk Booking Is Rising In...
8 Tips to Play & Win at Online...
How can software benefit facility management?
Do Professional Casino Players Pay Taxes for the...
Becoming a Trading Expert: What Is the Best...
Dos and Don’ts for B2B Organisations in 2022
Should your business be using Machine Vision?
Colour Masterbatch vs Raw Pigments – Which Is...
Keeping your business moving as you expand online
Top Four Celebrities Who’ve Invested In Cryptocurrency
Why is Cloud Computing Tipped to be the...
How to Raise Money for Non-profit Organizations in...
Choosing the right theme for your WordPress Business...
A Guide to Using Celebrities to Promote Your...
Home General Why Is Saharan Dust Over Europe Right Now?
General

Why Is Saharan Dust Over Europe Right Now? 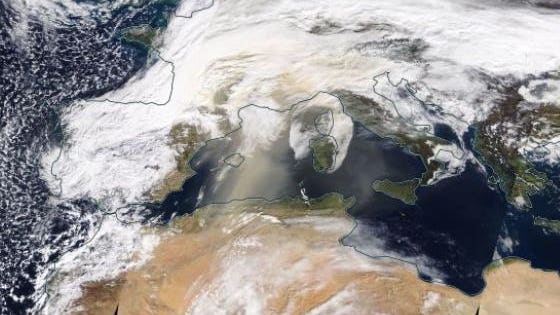 I often sprinkle references to music in my writing, and today will be no different. The song “Dust in the Wind” by Kansas is on my mind after seeing some really interesting pictures taken by a former graduate student from the Department of Geography at the University of Georgia. Pete Akers, a Postdoctoral Researcher at Institut des Géosciences de l’Environnement, posted stunning pictures of dust-laden skies from his base in Grenoble, which is located in southeastern France. What’s going on?

I think many people are familiar with periodic dust “belches” from the Saharan region of Africa being ejected across the Atlantic Ocean. According to NASA’s website, “Normally, hundreds of millions of tons of dust are picked up from the deserts of Africa and blown across the Atlantic Ocean each year.” Such dust storms can fertilize Amazonia soils, degrade U.S. air quality, impact hurricane development, and even shape Caribbean beaches.

On February 6th, 2021, Pete Akers wrote on his Facebook page, “The Sahara made a visit to Grenoble today! Lots of Saharan dust in the sky brought along with a warm southern air mass.” While acknowledging this happens a few times a year, Akers also noted this event was particularly intense. Such events have been documented in the scientific literature. For example, a 2019 study entitled, “Saharan dust events in the European Alps: role in snowmelt and geochemical characterization” was published in The Cryosphere. The paper concluded that Saharan dust reduces snow cover duration in Europe. Through a process called the snow-albedo feedback, dust darkens snow making it less reflective, which leads to increased snowmelt over time.

A 2011 study published in Microbes Environment found that Saharan Dust can also transport microorganisms into Europe. Specifically, this paper found that bacterial communities in the alpine snow of a Mont Blanc glacier were likely contaminated because of Saharan dust transport. In an era of COVID-19 virus, dust transport of bacteria and microorganisms certainly takes on new meaning for even the casual observer.

So how does dust from the Sahara Desert in African end up in Europe? It all depends on atmospheric dynamics. A few times a year a sufficiently strong and persistent southerly wind flow can funnel plumes of dust northward into Europe. It is so common that the United Kingdom (UK) Meteorological Office has a primer on Saharan Dust on its website. It notes, “As in other parts of the world, the wind can blow strongly over deserts – whipping up dust and sand high into the sky….If the winds in the upper part of the atmosphere are blowing north, the dust can be carried as far as the UK.” The graphic below was posted by Pete Akers and shows a forecast from the Barcelona Dust Forecast Center. The dust plume affecting Europe this weekend is clearly evident.

I can imagine a few car owners and commuters in the region agree.

Is Carbon Capture The New Biofuels?

Things To Do Before Buying A High Value Home