Breaking
Can You Settle Your Student Loans Or Negotiate...
How to Use Amazon Attribution For Ad Campaigns
How To Quickly Start And Scale Your Business
Terra Virtua: What NFTs Can Teach Us About...
5 Easy Steps To Prepare Content For E-A-T...
Physical Inactivity Linked To More Severe Covid-19 Infection...
The 2021 Estimated Tax Dilemma: What Tax-Return Pros...
Want To Digitally Transform Your Business? Start With...
How to Optimize Google My Business and Leverage...
Debunking Link Building Myths in 2021
How, When And Where You Can Gaze At...
SBA Opens $16.2 Billion Shuttered Venue Operators Grants...
What are the Essential Features of a Small...
Trends In Executive Recruiting That Will Help You...
The Growing Case For Banning Pesticides Linked To...
The Reopening High – But Long-Term Issues Cloud
Home Technology Why NASA’s Pluto Flyby 5 Years Today Continues To Change The Search For Life Beyond Earth
Technology 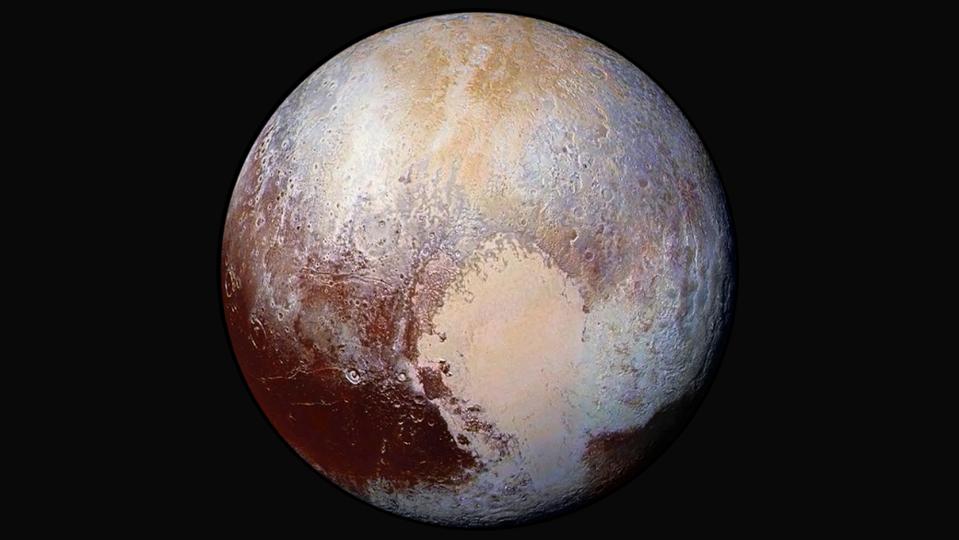 Pluto in enhanced color to show the differences in the composition and texture of its surface.

Could there be life in Pluto’s liquid water ocean? If so, the “habitable zones” around distant stars where astronomers look for signs of life must be dramatically larger than anyone thought.

If life exists on Pluto, it could exist almost everywhere. That’s the takeaway from NASA’s discoveries made five years ago today when its New Horizons spacecraft sent back the first-ever close up images of the dwarf planet from 3.26 billion miles away.

“The data returned has forced us to re-think everything about Pluto,” said Dr. Kevin Peter Hand, Planetary Scientists & Astrobiologist at NASA’s Jet Propulsion Laboratory, to the BBC on last week’s Pluto: Back from the Dead episode of its long-running science program Horizon. “This small, unassuming world may have a liquid water ocean underneath its icy surface.”

First discovered in 1930 and demoted from planet status in 2006, prior to the 2015 flyby scientists had expected a very cold and geologically dead world. What they got was an incredibly complex and geologically active world that might contain a liquid water ocean.

Pluto is on average 40 times further from the Sun than Earth is—too far away from Earth to be seen with the naked eye—with sunlight taking around 5.5 hours to reach it. It receives just 1/1,600 of the sunlight that Earth gets and its surface at the equator can get as cold as −240 °C/−400 °F.

So what New Horizons uncovered at Pluto remains truly remarkable. Here are the highlights:

1 – Pluto has snow, mountains, canyons and ridges forged from ice

It has nitrogen frost and methane snow, it has snow-capped mountains forged from ice. It also has steep ridges—blades—that are not seen anywhere else in the Solar System. All of this was immediately obvious to the New Horizons team—and profoundly shocking.

New Horizons found an enormous heart-shaped impact crater, a reservoir of solid, but soft nitrogen ice—a glacier that has polygon shapes and troughs carved into it. It appears to be moving and has no craters within it; it’s a new, possibly constantly changing, churning region. “The surface of Pluto has been re-paved,” said Hand. “The images are telling us that some sort of geological processes are going on– how could that be powered?” It seems that Pluto is geologically active; it has its own heat source. 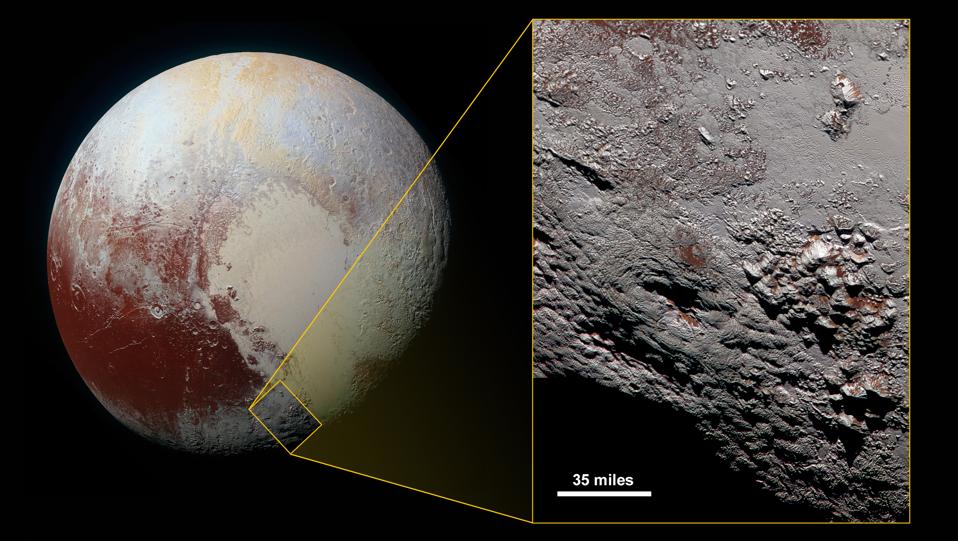 Wright Mons in Color. This composite image of a possible ice volcano on Pluto includes pictures … [+] taken by the New Horizons spacecraft’s Long Range Reconnaissance Imager (LORRI) on July 14, 2015, from a range of about 30,000 miles (48,000 kilometers), showing features as small as 1,500 feet (450 meters) across.

About 90 miles/150 kilometers across and 2.5 miles/4 kilometers high is something that no-one expected to see on Pluto—an enormous ice volcano. It that’s true it would be the largest volcano discovered in the outer Solar System. We know it’s active, or at least young, because there is only one impact crater on Wright Mons.

New Horizons found ammonia on Pluto, which is important because it lower the temperature that ice water melts. It creates a sludge—a kind of lava. 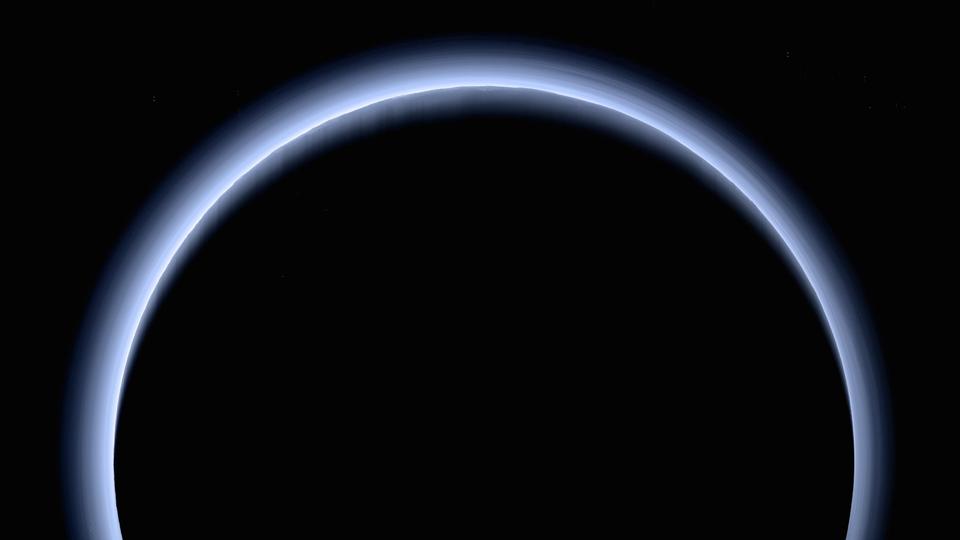 This is the highest-resolution color departure shot of Pluto’s receding crescent from NASA’s New … [+] Horizons spacecraft, taken when the spacecraft was 120,000 miles (200,000 kilometers) away from Pluto as the Sun illuminates the scene from the other side of Pluto and somewhat toward the top of this image.

4 – Pluto has an atmosphere and blue skies

One of the most spectacular images from the 2015 flyby was this photo (above) of the layers of blue haze in the dwarf planet’s atmosphere. Revealed as New Horizons left the Pluto system and peered back to see the world backlit by the Sun, this shot shows even more detailed layers of a photochemical smog of methane and other molecules in Pluto’s atmosphere.

More about its atmosphere was recently revealed by NASA’s “flying telescope” SOFIA during a rare eclipse-like occultation of a star by Pluto.

The images form a strip 50 miles (80 kilometers) wide, trending (top to bottom) from the edge of … [+] “badlands” northwest of the informally named Sputnik Planum, across the al-Idrisi mountains, onto the shoreline of Pluto’s “heart” feature, and just into its icy plains.

Pluto’s dramatically uneven ice shell thins at Sputnik Planitia, which scientists think may contain a subsurface ocean. “The evidence from the New Horizons mission makes it quite hard to explain what we’re seeing without invoking an ocean as an explanation,” said Hand. If Pluto has an ocean, it must retain heat inside, possibly using an insulating layer of gas that keeps the ocean in liquid form. “Where you find liquid water you generally find life,” said Hand. “It’s the canary in the coal mine for habitability.”

This has massive implications for astrobiologists searching for life beyond Earth. If Pluto could support life, so too could remote, icy exoplanets far from their host star—as well as other dwarf planets, comets, and asteroids in the outer Solar System.

What’s the evidence for an ocean on Pluto?

How can a liquid ocean persist beneath an icy crust despite the dwarf planet’s orbit being so far from the Sun in the cold outer reaches of the solar system?

Since 2015 it’s been thought that the decay of radioactive elements in the rock could have eventually generated enough heat to melt the ice and form a subsurface ocean. However, a new paper suggests that the accretion of new material during Pluto’s formation may have generated enough heat for liquid water to exist today. The researchers calculated that if Pluto formed over a period of less that 30,000 years, then it would have started out “hot.”

It could mean that Pluto, and the other dwarf planets Eris and Makemake, might have formed fast and hot, with liquid oceans. 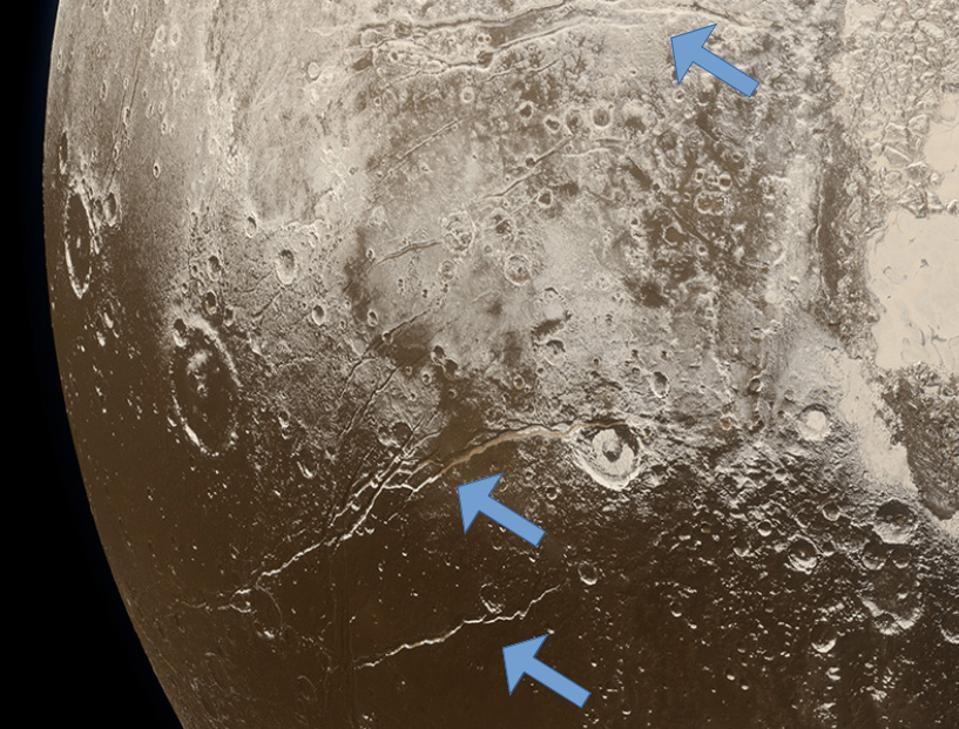 Extensional faults (arrows) on the surface of Pluto indicate expansion of the dwarf planet’s icy … [+] crust, attributed to freezing of a subsurface ocean.

How Pluto re-defined the ‘habitable zone’

Discoveries on Pluto has incredible consequences for the search for alien life because it makes the Solar System’s “habitable zone”—an area around a star where liquid water can exist—infinitely larger than expected.

If our own Solar System’s habitable zone is far larger than anyone thought, then it follows that astronomers should examine many more exoplanets than those close to their host stars.

Should we send another spacecraft to Pluto?

Plans are afoot for an orbiter. Not only is there a lot to examine in more detail, but we only really know half the story because the New Horizons flyby lasted just a few hours. Since Pluto takes 6.4 Earth days to rotate, the probe was only able to photograph one side, although the far side has been mosaiced from scraps shot from afar during New Horizons’ approach.

“Our mission concept is to send a single spacecraft to orbit Pluto for two Earth years before breaking away to visit at least one Kuiper Belt Object (KBO) and one other KBO dwarf planet,” said Dr. Carly Howett at the Southwest Research Institute, who is leading the effort.

Either way, what was discovered at Pluto continues to change planetary science and the search for life beyond Earth.