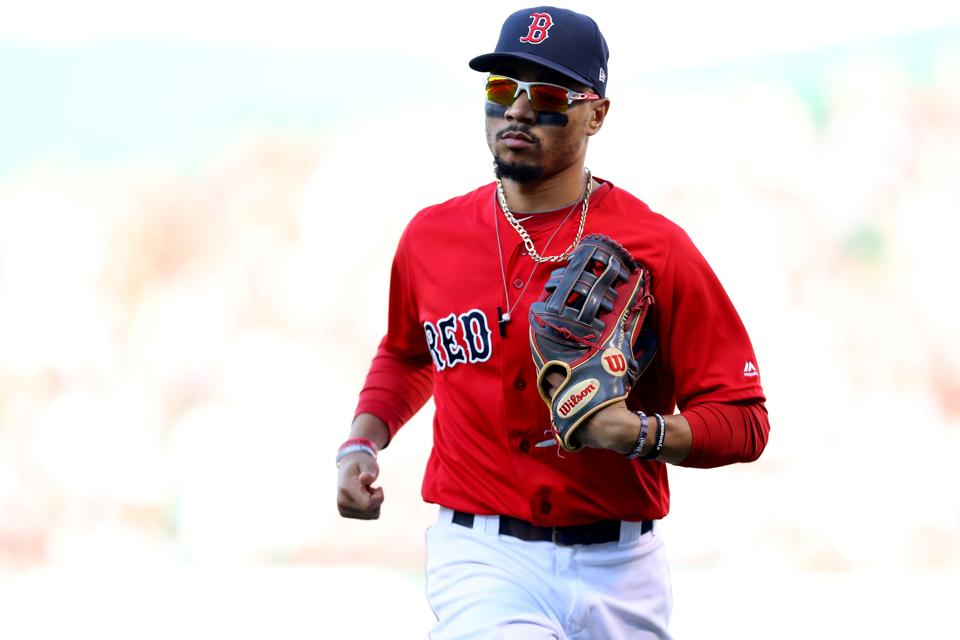 If the Boston Red Sox are going to trade Mookie Betts, the Los Angeles Dodgers might be able to make … [+] it worth their while. (Photo by Maddie Meyer/Getty Images)

The Los Angeles Dodgers’ loss could be the Boston Red Sox’s gain.

It seems that the Dodgers were hot in pursuit of a trade for Cleveland Indians shortstop Francisco Lindor before the Indians decided to deal righty Corey Kluber to the Texas Rangers.

With Kluber’s contract off their books, the Indians seem less likely to deal Lindor, who is under team control and arbitration-eligible for this season and next barring a longer extension.

So where can the Dodgers, one year removed from their second of two consecutive trips to the World Series, but coming off a season that saw them eliminated in the National League Division series, turn to add star power to their lineup? According to Bob Nightengale of USA Today, Los Angeles may be looking toward Boston and Mookie Betts. And considering the Red Sox’s tall task of getting under the $208 million luxury-tax threshold, and Betts’ reluctance to sign an extension before he can reach free agency next winter, Boston might have to thank the Indians for getting out of the way.

“The Los Angeles Dodgers have engaged in exploratory trade talks with the Boston Red Sox about former MVP outfielder Mookie Betts, according to two officials with direct knowledge of the discussions,” Nightengale wrote Tuesday.

If the Red Sox are planning to contend for another World Series title, trading Betts is probably the second-best option they have right now. But trading Betts would not preclude them from remaining highly competitive while also bolstering their odds at future success. And the Dodgers might be the key to the Red Sox executing their plan.

A Betts-less Boston lineup would still feature Rafael Devers, Xander Bogaerts, J.D. Martinez and Andrew Benintendi, and would be the envy of many teams in the American League. And that’s before you factor in what the Red Sox might be able to get in return for Betts. And the Dodgers should be all-in to get Betts, considering all they’d be able to offer him in terms of pay and lifestyle, in addition to being a perennially winning team.

Nightengale mentions that the Dodgers have floated Corey Seager’s name in trade talks, but the Red Sox have no need for him with Bogaerts signed long-term at shortstop. Obviously any package would have to be built around Dodgers top prospect Gavin Lux. He could easily slide over to second base and combine with Bogaerts to give the Red Sox their double-play combination for the next decade.

The Dodgers have the third-best farm system in baseball, according to MLB.com, and 15 of their 30 top prospects are pitchers. That’s where the Red Sox would be able to dig in, because they certainly haven’t done well in the “develop your own pitching” department. Maybe if Lux is the center of the package the Red Sox won’t be able to also get fellow top-100 prospects Dustin May or Josiah Gray. But there have to be other pitchers in the Dodgers’ pipeline that could get the Red Sox back on the road to having younger, cheaper pitchers in their rotation.

If the Dodgers need to cut a little payroll to take on Betts and what should be his $30 million arbitration award, Boston could take back Joc Pederson, who’s 27 and projected to make just $8.5 million in arbitration, according to Roster Resource. The Red Sox could use Pederson to trade for bullpen help, or keep him as part of a right-field platoon with a right-handed bat they pluck out of free agency. And they’ll still be paying their right fielders half, or less than half, of what they would be paying Betts.

The Red Sox have a unique opportunity to reload their team without much drop-off on their performance by dealing Betts. There are plenty of teams with room in their budget and championship desperation to barter with over a Betts deal. The Red Sox would be wrong not to shop him around, but even after they scour the league their best option might be the Dodgers.

3 Teams That Could Trade For Browns Tight...

First They Dropped Wrestling, Then Soccer. What’s Next...

Fluke Or For Real? Jets Are Gambling On...