Breaking
Meet Onesimus, The Enslaved Man Who Saved Boston...
How to Build a Sales Forecast Model
The Unexpected Ways COVID-19 Has Forever Changed What...
Google Posts: Conversion Factor — Not Ranking Factor
How To Bring Your Branding To Life
Coinbase Cofounders And Investors Poised To Rake In...
How To Stay Top-of-Mind For Your Audience With...
Employers: Eight Red Flags You May Not Notice...
The benefits of videoing in the automotive industry
Ted Lasso, Other Apple TV+ Shows Arriving Soon...
How To Incorporate Click And Collect Into Your...
What Are Working Capital Loans and When Should...
The 10 Biggest Trends in Entrepreneurship to Look...
Clubhouse Has Grown 10X In Two Months. Here’s...
Here’s Why Tyson Foods Stock Looks Undervalued At...
How To Maintain Client Relationships During Long Projects
Home Technology Why The Nassau Grouper Is A Conservation ‘Success Story’
Technology

Why The Nassau Grouper Is A Conservation ‘Success Story’ 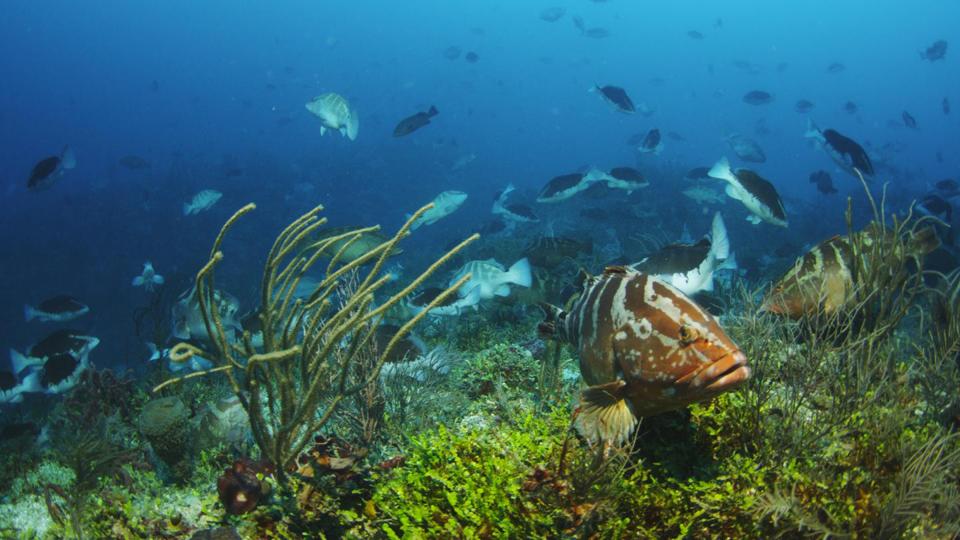 The Nassau grouper, an iconic and endangered Caribbean reef fish.

The Caribbean’s Cayman Islands are known for their stunning coral reef ecosystems. Home to a large diversity of marine life, these reefs function as a source of both food of tourism for residents of the three islands. But for some of the reef’s fish, local pressure has led to significant population declines.

The Nassau grouper is one of the the Cayman Islands’ reef fish that has struggled the most in recent years. While the Nassau grouper is itself a top predator, the fish is also an important prey for even larger predators, like sharks. What’s more, the grouper’s eggs are also consumed by whale sharks and manta rays. Given the reliance of larger marine animals on the fish, the Nassau grouper is considered to be a ‘canary in a coal mine’ for coral reefs, meaning the decline of the grouper often indicates a reef is in poor health.

Before their recent decline, the Nassau grouper was once the most common species of grouper in U.S. waters. In 2016, the grouper was listed as ‘threatened’ in the United States under the Endangered Species Act. In the same year, the government of the Cayman Islands enacted legislation for the protection and aided recovery of the fish.

Perhaps most significantly, the legislation prohibited all fishing and selling of Nassau groupers during the fish’s 5-month spawning season. “Refraining from taking marine life when they are spawning is a major component of a sustainable fishery,” John Bothwell, Senior Research Officer at the Cayman Islands Department of Energy told Cayman News in 2018. “It is one of the reasons why the Cayman Islands, and other fisheries jurisdictions around the world, have closed and open seasons, along with bag and size limits, for marine life that is at risk of being overfished.” 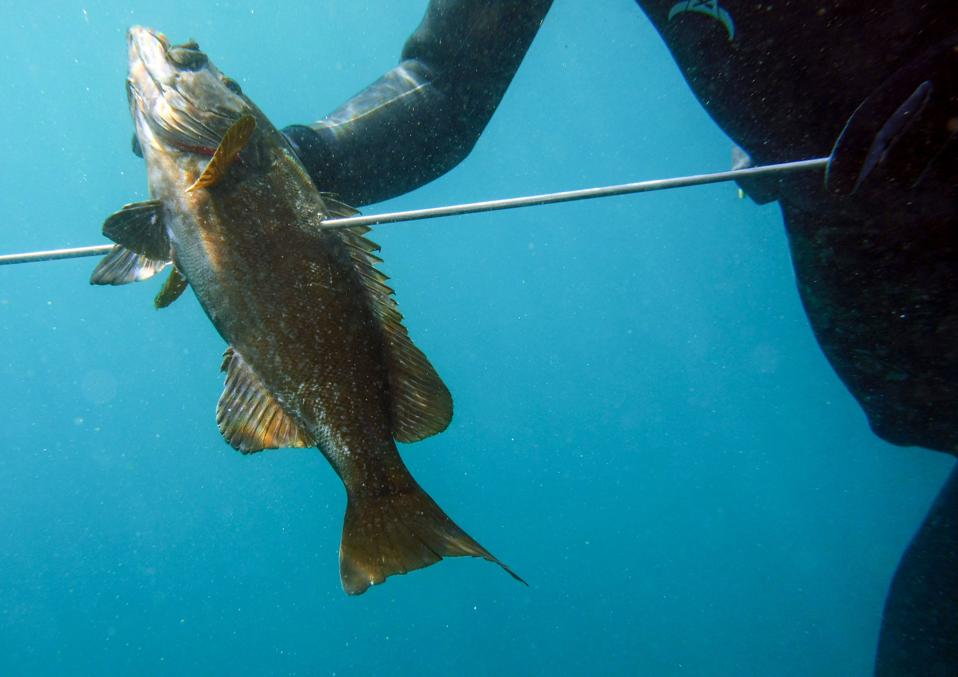 A grouper caught by spear-fishing.

So how effective have these protections been at recovering the Cayman Island’s Nassau groupers? Based on new research from the collaborative Grouper Moon Project, things are looking good – really good.

The Grouper Moon Project is a partnership between the Cayman Islands Department of Energy (CI-DOE), scientists at Scripps Institute of Oceanography and Oregon State University, and the citizen conservation group Reef Environmental Education Foundation (REEF). Together, the project works to protect and conserve the Islands’ Nassau grouper.

For nearly two decades, one of the Project’s primary goals has been to develop a way to accurately monitor grouper spawning aggregations. Unfortunately for researchers, Nassau groupers typically form their spawning aggregations at inconvenient – and often dangerous – locations at the reef’s edge, making it challenging for SCUBA divers to observe and tag the fish. Given these challenges, assessing the state of the grouper’s population has been difficult.

But the Grouper Moon Project has found a way. “We developed a unique approach for monitoring these populations… [Through] a combination of using mark and recapture tagging techniques to track the proportion of tagged fish, and video transects to count fish across the aggregation,” explains Brice Semmens, associate professor and ecologist at Scripps. 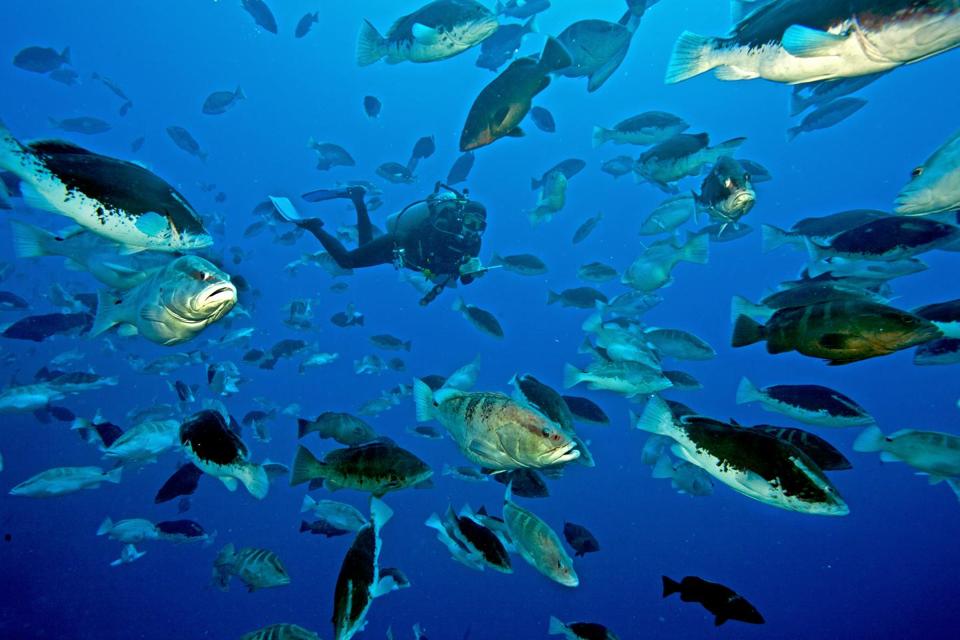 A researcher swims in the midst of a Nassau grouper aggregation as part of an ongoing effort to … [+] track the critically endangered species numbers.

The Grouper Moon Project’s protection efforts did not stop there. The team shared their data on the grouper aggregations with the Cayman Islands’ local communities and discussed next steps. In fact, the Project’s data sharing is part of what moved the Cayman Island government to enact the 2016 regulations to protect the Nassau grouper in the first place.

“Just doing the science isn’t enough,” says Christy Pattengill-Semmens, REEF’s director of science. “You need to partner with groups and governments capable of turning science into conservation decisions that support the local community.”

How To Pick A Fair Social Security Retirement Age