Why The Northern Lights Make Whales Go Blind And Get Lost 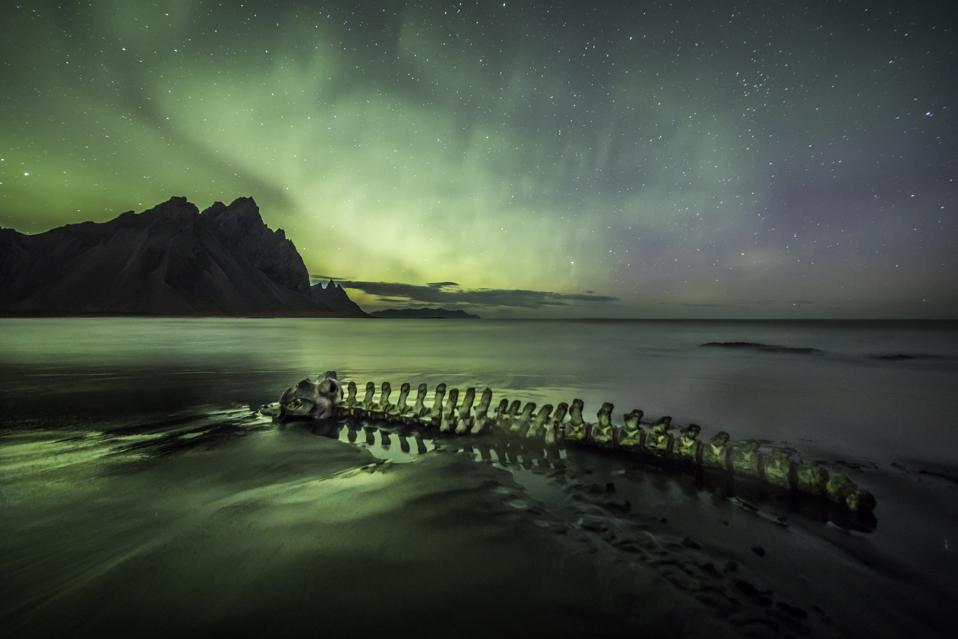 Skeleton of a beached whale under an aurora borealis (Northern Lights).

Watching the aurora borealis or northern lights twisting and pulsing in the night skies above the Arctic Circle is a special treat for those who venture north between October and March. What observers see is the effect of Earth’s magnetic field—the reason why there’s life on Earth as we know it.

However, as well as deflecting and safely channeling charged particles hurled at us from the sun, our planet’s magnetic field also—says a new study—helps gray whales (Eschrichtius robustus) find their way through the ocean.

A new study offers some of the first evidence that gray whales might depend on a magnetic sense to find their way through the ocean, and that strong solar storms—and thus intense displays of aurora borealis—leave them blind.

How animals use magnetoreception—detecting a magnetic field to perceive direction, altitude or location—is a remarkable story.

Reported in the journal Current Biology, ‘Gray whales strand more often on days with increased levels of atmospheric radio-frequency noise’ by Granger et al. outlines research that made the remarkable discovery that whales are more likely to strand themselves on days when solar storms disrupt Earth’s magnetic field.

The research correlates data on grey whales with the number of sunspots on the sun. The more sunspots, the more likely there is to be a strong solar storm—a sudden release of high-energy particles that can disrupt magnetic orientation behavior when they interact with our planet’s magnetosphere.

The paper’s big secondary finding is that it appears that the whales get stranded so much more often when there are solar storms because they have gone blind, and not because their internal GPS is giving them false information. 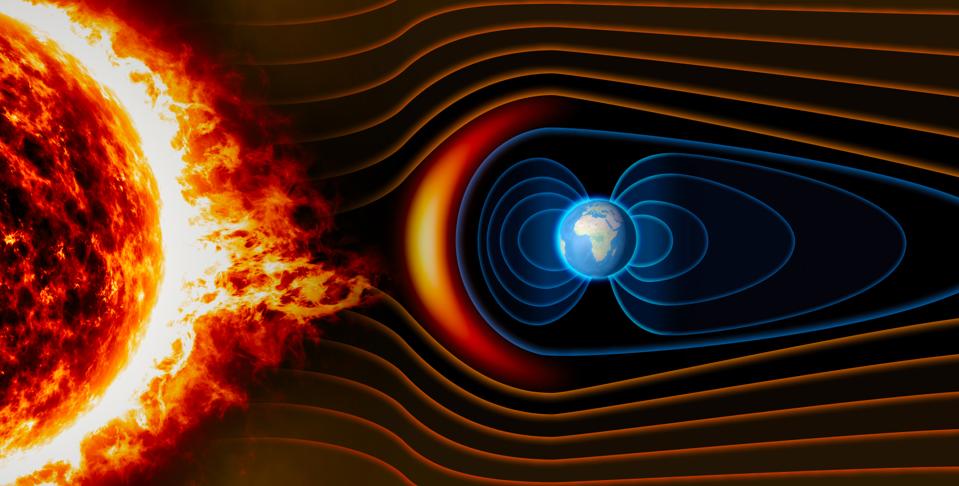 Earth’s magnetic field, the Earth, the solar wind, the flow of particles. Element of this image is … [+] furnished by NASA

Granger and her colleagues studied 186 live strandings of gray whales and found that on days with a high sunspot count the chance of a stranding more than doubled, while on days with high RF noise, the likelihood of strandings was more than four times greater than on randomly selected days. However, they found no significant increase in strandings on days with large deviations in the magnetic field.

So this isn’t about Earth’s geomagnetic field being distorted, but the whales’ magnetoreceptive sensor being disrupted. “I really thought that the cause of the strandings was going to be inaccurate information,” Granger said. “When those results came up negative, I was flummoxed. It wasn’t until one of my co-authors mentioned that solar storms also produce high amounts of radio-frequency noise, and I remembered that radio-frequency noise can disrupt magnetic orientation, that things finally started to click together.”

This isn’t the first time the link has ben made between whales and Earth’s magnetic field. In 2017 research revealed that mass strandings of sperm whales (Physeter macrocephalus)—a phenomenon that’s for long been a mystery to scientists—may be triggered by geomagnetic storms.

Paycheck Protection Program: How To Make Things As Smooth As Possible

Disrupt Or Die: The Business Imperative For Innovation

This Weekend’s ‘Earth Hour’ Will Darken The Night...

The Problem With Half-Truths About Coronavirus