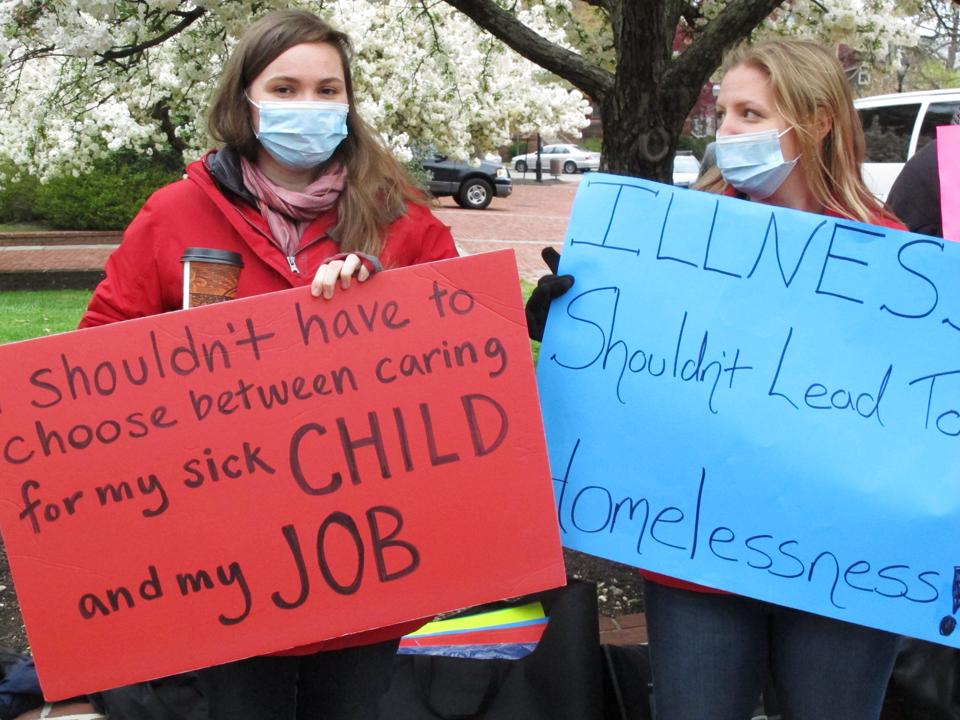 Last week, I wrote about a variety of the US government policies that will drive suspected coronavirus (COVID19) patients underground. One specific factor is the lack of paid sick leave and punitive workplace policies.

The Bureau of Labor Statistics notes that 24% of workers—more than 30 million people—don’t get paid sick leave. Of those with the lowest pay (e.g., service industry workers), more than half have no sick pay. In fact, part-time employees or those who work for small employers are not even entitled to unpaid sick leave. Many of these low-wage workers are in the service industry—food workers and housekeepers—and also in childcare. Do you want someone taking care of your youngster while they are ill because they can’t afford to call in sick?

Judd Legum had a biting post yesterday in Popular Information, “Free breadsticks during a coronavirus outbreak,” about Darden’s Olive Garden’s policy, forcing ill servers to work if they couldn’t afford to lose the day’s meager wages. Legum also noted that Darden, Outback Steakhouse, McDonald’s, and other large employers are lobbying for laws that would limit sick leave requirements. Companies have been successful in a dozen or more states⁠, including Arkansas, Florida, Iowa, Kentucky, Louisiana, Mississippi, Missouri, North Carolina, Ohio, Oklahoma, South Carolina, Tennessee and Wisconsin⁠5. Darden had a profit of over $782 million before taxes, with its CEO, Gene Lee, making $15.7 million in 2018

Senator Patty Murray (D-WA) and Rep. Rosa DeLauro (D-CT 03 ) introduced a bill expanding on the Healthy Families Act (HFA) to improve this issue. Their bill would require 14 days of paid sick leave that is immediately available at the beginning of any public health emergency, whether at the state or federal level. It would also expand coverage to include things like if your child’s school is closed for a public health emergency or if you or a family member needing care are quarantined or isolated because of exposure. The legislation also requires all employers to allow workers to accrue seven days of paid sick leave.

It’s shameful that the US is one of only three wealthy countries (with Japan and Canada) to not require paid sick leave for influenza and the only country not providing leave for cancer treatment.

Health economists Stefan Pichler and Nicolas Robert Ziebarth have shown that influenza-like illnesses declined by ~5% overall in states with mandated sick pay, but dropped by up to 40% during an outbreak⁠.

A new study in the National Bureau of Economic Research found that the mandates increased coverage by 13%; employees averaged two extra sick days per year. Importantly, there were no significant adverse effects on other benefits nor did it affect employment or wages. Lead author Johanna Catherina Maclean, of Temple University, told the New York Times that, “When we think about that collective well-being, society is better off after the mandates than before the mandates.”

While the CDC tells employers, to “ensure that your sick leave policies are flexible and consistent with public health guidance,” they have not been stepping up adequately. The Murray-DeLauro paid sick leave legislation proposal has been endorsed by National Partnership for Women and Families, National Employment Law Project (NELP), Center for Law and Social Policy (CLASP), Center for American Progress (CAP).

In contrast, the Trump administration is planning on asking Congress to pass a payroll tax cut and relief for hourly wage earners. While his focus seems to be on shoring up industry and tax cuts, the proposal from the Democrats is more focused on the more human aspects of relief—being able to stay home when you have a family member requiring care or are ill.

One immediately obvious problem with the Murray-DeLauro proposal is that the time of coverage is limited to only 14 days. If someone becomes seriously ill with coronavirus, especially if they require ICU care, they are likely to be out sick for 6 weeks.

What happens if employees are “only” quarantined and unable to work. Who will compensate them? Will they be replaced for having missed too much work?

Most states allow employers to fire workers at will. I know that the hospital I worked at used to fire nurses after three “occasions,” which included calling in sick.

If employees such as teachers or hospitality workers, who will be at high risk of a coronavirus infection become ill, their treatments and hospitalizations probably wouldn’t be covered by Worker’s Compensation, so they would be dependent on having adequate healthcare insurance to pay the costs of their illness. This is another example of why I support universal health care coverage.

What happens to independent or temporary contractors—the gig economy—or part-time workers, which many companies use to avoid paying benefits?

The biggest problem will likely be getting GOP buy-in, although they have growing recognition of the problem. Likely industry will get bailouts and low wage-earning people won’t.

This again illustrates why we will fail to control this public health crisis unless we treat others more equitably.

The SECURE Act’s Impact On RMDs For IRA Owners