The U.S. is banning most travel from Europe to the United States for 30 days due to the coronavirus outbreak. The travel restrictions do not apply to US citizens, only to European foreign nationals, present in 26 European countries over a two week period ahead of their forecast arrival in the US.

This as actor Tom Hanks and his wife both test positive for the disease in Australia, and as the number of cases in the U.S. continues to rise to over 1,200–up tenfold in a week–with at least 38 deaths.

The UK is not included in the travel ban, which begins at midnight Friday March 13. There will be a few exemptions “for Americans who have undergone appropriate screenings,” President Trump said at the White House Wednesday. 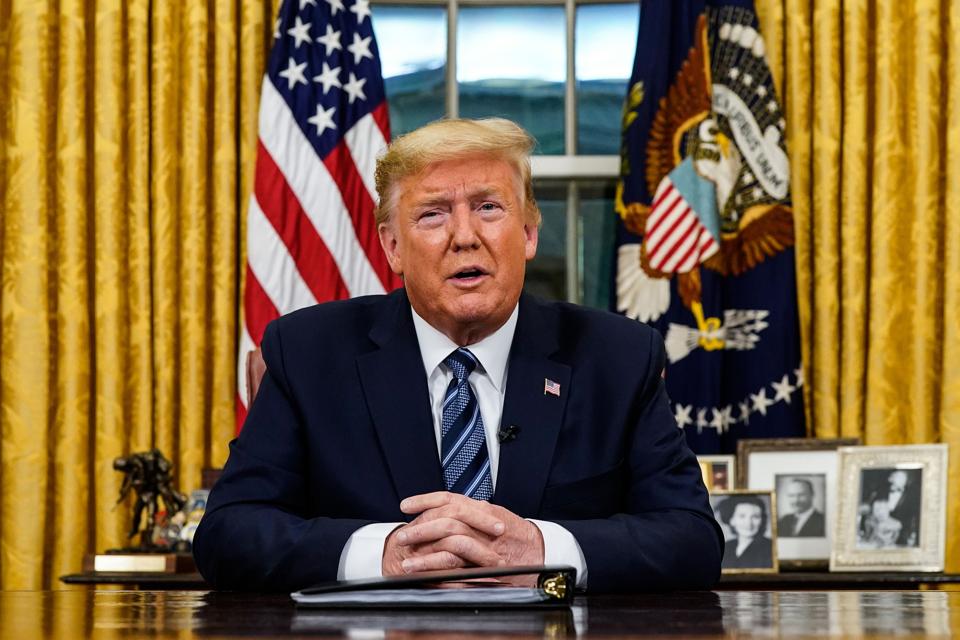 United States President Donald Trump ushering in the US ban on all travel of foreign nationals from … [+] Europe for 30 days from midnight Friday, to stop the spread of the coronavirus outbreak, and “keep new cases from entering our shores”. (Photo by DOUG MILLS)

Since then the White House has clarified that all US citizens, legal permanent residents, and their families members are exempt, possibly on condition they undergo enhanced screening at specific U.S airports on entering. In a statement, acting Homeland Security Secretary Chad Wolf said the travel restriction will be similar to the existing ones affecting individuals who’ve been in China and Iran, The Guardian claims. “Americans who’ve been in the Schengen area may have to travel through specific airports with enhanced screening procedures. “

There has been no mention so far of applying bans on those traveling from the U.S to Europe, despite the dwindling chances of getting a flight out for weeks.

As the number of confirmed cases of the coronavirus in Europe reached over 22,000 Wednesday–increasing by a quarter in a day–America has taken the drastic step of placing a total travel ban on Europeans heading its way, which equates to about 500 million citizens of the EU.

For Europeans, most holidays and business trips planned for March and much of April are off. Thousands of  transatlantic flights will be affected, and hundreds of thousands of passengers. There will be mass cancellations of American vacations organized through travel agents and online travel agents/OTA’s such as Expedia, Booking.com and Hotels.com.

It is still unclear how the travel suspension will work–for example will there be a ban on flights from the continent? 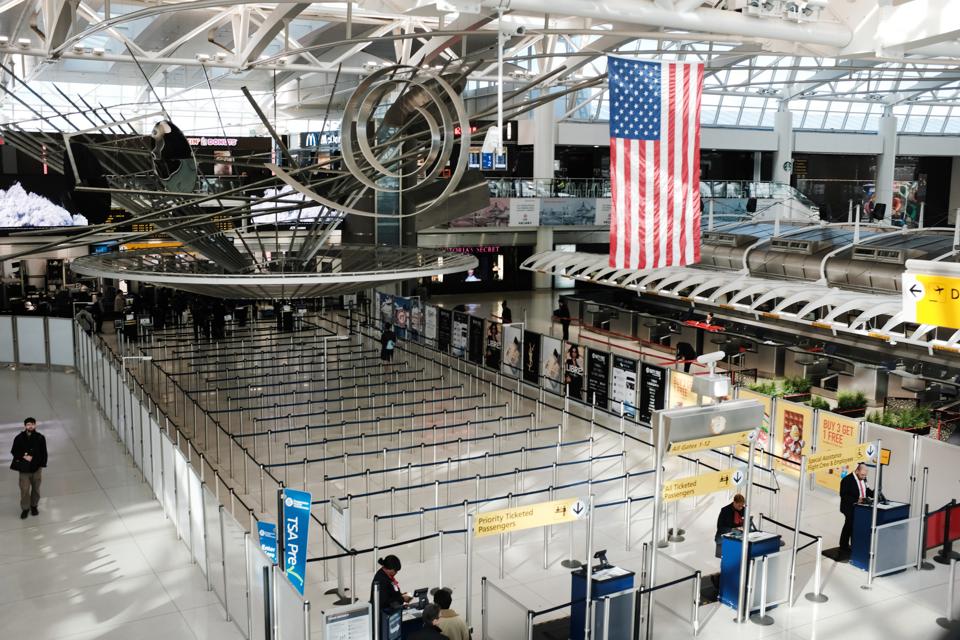 With the global coronavirus crisis airports are cutting many routes and airplanes and airports are … [+] emptying out. Now with the 30 day US ban on travel into the country by European nationals, the international departure terminal at John F. Kennedy Airport (JFK) will have thousands less passengers as tourism is hit hard

US May Tell Citizens To Reconsider All Europe Travel

The move to ban much of incoming travel from Europe also comes as the U.S. warns all of its 327 million citizens to reconsider going abroad at all Bloomberg reports. Meantime, according to the Washington Post, the State Department is considering lifting its travel advisory for the whole of Europe to an alert Level 3: “Reconsider Travel”, as it has already done for Italy (France, Europe’s second worst hit country, remains at Level 2, ‘Exercise Increased Caution’).

The ramifications for the tourism industry on both sides of the Atlantic are enormous, with the losses in revenue already embattled operators will suffer as a result of trip and hotel cancellations. The consequences for the airline industry which is already suffering huge losses due the the coronavirus are mind boggling.

Since Italy swept in a nationwide lockdown on Tuesday, to battle its deadly outbreak of COVID-19, many airlines began cancelling all flights to and from Italy until the end of April or beyond, leaving hundreds of travelers stranded and confused. Within a day, Delta Airlines called off all Italy flights due to the quarantine. Some airlines are offering refunds and waivers on change fees depending on ticket conditions and no doubt they will do the same for masses more Europeans to be affected by the US travel ban from Europe.

Italy is Europe’s coronavirus epicentre with over half the total cases: about 12,000. Despite its emergency step to a national quarantine, there were still more than 2,300 new cases on Wednesday, as the country’s death toll from COVID-19 rose to 827.

Travels to Italy have become increasingly precarious since the first case of the virus appeared on February 26. In just two weeks since then, holidaying in the country with the second-worst outbreak in the world after China has become a risky business. 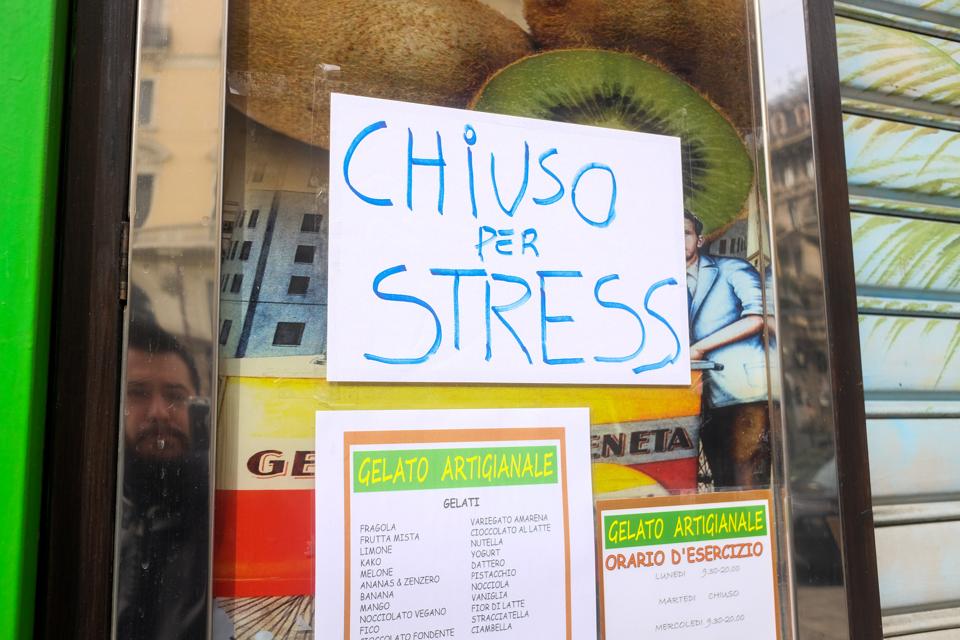 The sign says “Closed for Stress” as if to make light of a serious situation as restaurants and bars … [+] in Italy had no customers on the first day of the national quarantine March 10. Now all bars and restaurants, most shops and businesses will close as the toll from the disease continues to rise. Only pharmacies, food stores and banks will stay open as well as public transport

The situation has become so serious, that on Wednesday the government decided to shut down restaurants, cafes, bars, businesses and all shops, except supermarkets and grocery stores until March 25. This extended the previous nationwide closure of museums, monuments, archeological and historical sites, as well as cinemas, ski slopes, bingo rooms, nightclubs and discos.

Now only “essential services”–pharmacies, food stores, banks and public transport–are allowed to operate. As any hint of normal daily life disappears for Italians, tourism has pretty much become unviable in the quarantined country, with an increasing number of hotels closing their doors over the past few days.

France, the world’s No.1 tourist destination, is the second worst hit place in Europe after Italy, with 2281 cases and 48 deaths reports BFMTV, up from 38 cases at the end of February.

We All Learned Physics’ Biggest Myth: That Projectiles Make A Parabola

Here’s Why The Stock Market Doesn’t Care About...

Competition Not Subsidies Is What Power Consumers Deserve

The Digital Health Landscape In 2020 And Beyond