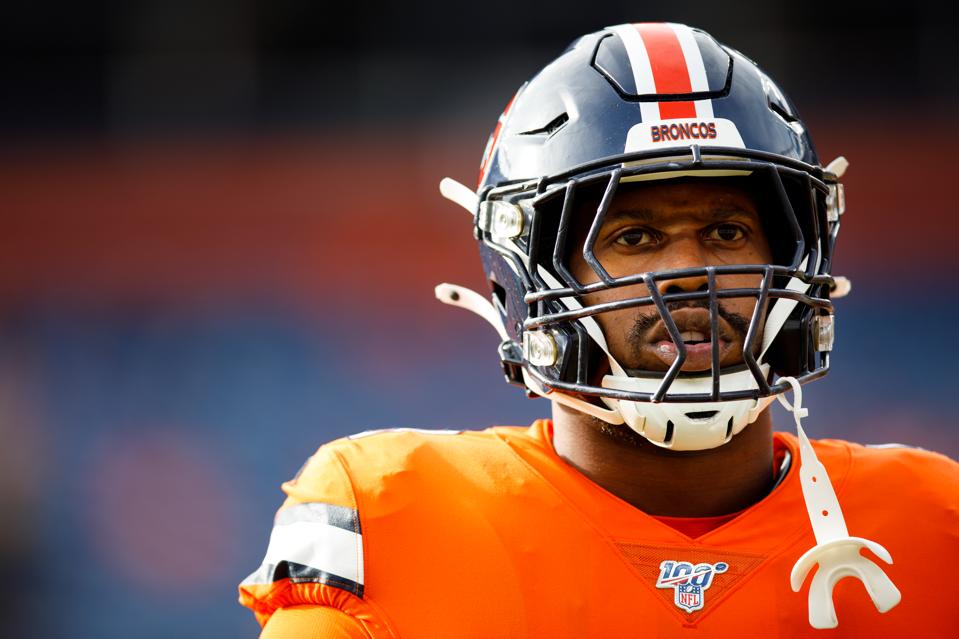 Denver Broncos linebacker Von Miller warms up before a game against the Detroit Lions at Mile High … [+] on December 22, 2019 in Denver, Colorado. The Broncos defeated the Lions 27-17. (Photo by Justin Edmonds/Getty Images)

Just four years ago the Denver Broncos dominated Super Bowl 50. While Peyton Manning turned in a top effort in his last splash as the oldest starting quarterback in Super Bowl history, it was really Denver’s star linebacker Von Miller who put on the show.

When not making tackles or terrorizing quarterbacks on the run, the eight-time Pro Bowler keeps busy off the field. Miller runs a business on the side as the chicken farmer, and in 2012 founded Von’s Vision, an organization established to provide Denver-area children with routine eye examinations and eyewear.

For his efforts both on and off the field, Miller has been nominated for the “Anything But Ordinary” Player of the Year award. Other nominees of the award include Dallas Cowboys quarterback Dak Prescott, longtime Arizona Cardinals wide receiver Larry Fitzgerald and six others. Fans can find out who won tomorrow night, Feb. 1, at the NFL HONORS event, televised on FOX at 8 pm ET.

This morning, I got to speak with the defensive stalwart, and who talked about innovation and why he thinks defense will dominate Super Bowl LIV.

Andy Frye: First off, you’re up for an award to be announced just before Super Bowl Sunday. Tell us about that.

Von Miller: Microsoft Surface and the NFL just recently launched an award called the “Anything But Ordinary” Player of the Year award to celebrate the unique passions of NFL players off the field. I’m actually excited to be part of the finalists, though each of us are anything but ordinary in our own regard.

Off the field, I run a sustainable chicken farm, and behind the scenes we run Microsoft Surface as a part of business operations. We use the service to walk the grounds and monitor weather and the conditions of the land, and also to monitor inventory and communicate with customers. So, I’m really surrounded by Microsoft Surface in my business. I think it’s important to be innovative in everything you do, so it’s an honor be considered for the award.

VIDEO: During Super Bowl 50, the Cam Newton and the Carolina Panthers had no answer for Von Miller’s menacing defense.

AF: So, how did you get into chicken farming?

Miller: It was part of my major at Texas A&M, and it just kind of happened. I took a (chicken farming) class to add points to my GPA. I went into the class and felt the course was easy, and one time fell asleep in class and had my professor wake me up.

After that the professor would press me and ask me questions about vertical integration, genetics, and everything to test me, and in turn just keeping on top of it to know everything I could, I made it part of my major, really started learn it as a business. And here we are.

Miller: I’ll start with the 49ers’ defense. They’ve got (linemen) Arik Armstead, DeForest Buckner, Dee Ford and Nick Bosa. Plus Solomon Thomas—he’s a No. 2 pick overall, coming off the bench. So they’re stacked on defense. But we know pass rush and secondary go hand to hand, and San Francisco has a strong secondary too.

The Chiefs, they have a good offensive line as well, but I just think the 49ers’ defense and front four will just be too much for them.

In particular, the (Chiefs’) left tackle of Eric Fisher versus Nick Bosa matchup, that’s where it’s going to be won or lost. Eric Fisher is a great tackle and great at a lot of things, but one thing that he’s not great at is the power rush, and that is Nick Bosa’s forte. That’ll be the matchup of the game for me.

AF: When you’re ii a high stakes game like the Super Bowl, how different is it from a home game, or a playoff game?

Miller: After you’ve played in a first playoff game and then a second playoff game, and win and get to the Super Bowl, you’re used to what it feels like to play for everything.

Stanford’s Latino State Of The Union: It’s Time We Support The Entrepreneur

When Is The Right Time To Start A Business?

French Tariffs Could Lead To A Festive Send...

Respirators From 3D Printers: How The Spanish Maker...