Breaking
Zynga Stock Looks Attractive At $9
How Russian Thieves Use Dark Web To Get...
France Off Travel Corridors And FCO Exempt List
Ask Ethan: Why Are The Moon And Sun...
When To See The Moon And The Planets...
IRS-CI Involved In Largest-Ever Seizure Of Terrorist Organizations’...
The Check Really Is In The Mail. After...
Epic Games Vs Apple: Why You Won’t Be...
Senator Kamala Harris Proposed A Bold Tax Credit...
Deal Terms To Reduce The Risk When Buying...
Multiple Sclerosis Drug Shows Promise For HIV Prevention...
The Neglected Piece Of Retirement Planning
It’s No Longer A Viable Option For Capitalism...
Virtual Credit Cards: An Extra Layer Of Protection...
Lessons From The Rainforest: Human Health Leads To...
Four Easy Ways To Bolster Your Company’s Reputation
Home Finance Why Your Index Fund Is Built To Survive The Coronavirus Outbreak
Finance

Why Your Index Fund Is Built To Survive The Coronavirus Outbreak 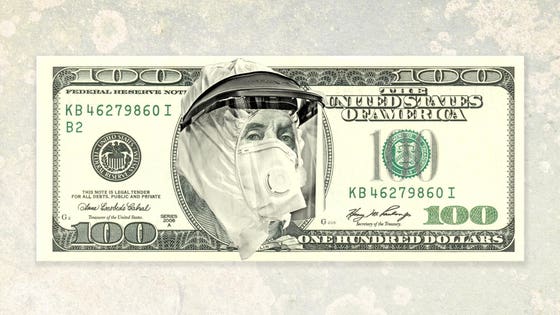 With the market already down more than 10%, the coronavirus-triggered plunge may turn into one of the fastest bear markets to hit U.S. stocks ever. But, believe it or not, a passive investment in the S&P 500 may be the best way to ride out and ultimately profit from the storm.

The global contagion is slowing international travel. Oil is plunging as traders anticipate falling demand for jet fuel from airlines. Energy stocks like ExxonMobil are trading at lows not seen since the 2008 crisis. Stocks of brick and mortar retailers, malls, movie theaters, cruise ship operators, amusement parks and airlines are also plummeting as investors forecast people hunkering down at home.

As coronavirus spreads, the problems at these companies will worsen and cyclical sectors that track closely with global gross domestic product growth will also suffer. This morning, the industrial and materials sectors went into the red, posting negative returns for the past 12 months. They joined energy, down 30% over the year, as the only sectors to lose money. The S&P 500 is still ahead 7% year-over-year.

Here’s the good news: Your index fund already predicted all of this.

Even before the coronavirus became a global crisis, the S&P 500 was under-weighted in the types of stocks that were most vulnerable to the outbreak and it was heavily over-weighted in the software, internet, online retail and social media companies that are likely to either weather the storm, or thrive.

Coronavirus caused the quickest 10% market correction since the 2008 financial crisis.

These companies have pristine balance sheets and strong long-term growth prospects to manage through the outbreak. Some may also see increased sales as people stockpile food and health safety products, or benefit from people staying at home. About half of the overall S&P 500 is in information technology, healthcare and communications stocks —all unlikely to see major long-term disruptions due to the outbreak.

On the other hand, the types of businesses that are in free-fall, such as energy and retail, hardly make a dent as a weighting in the S&P 500. For instance, the entire energy sector entered 2020 at about the same weight as Apple alone. Thus energy’s 20% plunge over the past month is causing relatively minor pain. Retailers like Macy’s, Gap and Nordstrom that may struggle further are also minor weightings, in addition to small-sized drillers like Cimarex Energy, Helmerich & Payne, Cabot Oil & Gas and Devon Energy.

While holders of the S&P have sidestepped the worst stock implosions since the outbreak, they’re also big holders of potential beneficiaries.

Johnson & Johnson, UnitedHealth Group and Procter & Gamble are about 1% index weightings and they could see an uptick in sales as people all the world prepare for the virus’s spread. If more people begin to work from home, companies like Microsoft will benefit as demand spikes for its suite of cloud products including email and remote working services. Wireless carriers like Verizon and cell tower giants SBA Communications and American Tower will benefit from rising smartphone and internet activity. Any surge in online sales will help ecommerce companies like Amazon and logistics warehouse operator Prologis as well as another S&P 500 member Equinix, one of the largest data center real estate investment trusts. Streaming services like Netflix and internet giants like Google and Facebook will also see a boost in eyeballs from masses of homebound Americans.

You guessed it. Each of these companies has high weightings in the S&P 500.

The biggest weights in the S&P 500 are also the largest and most successful companies in America.

The index is well-prepared for the coronavirus because it is designed to track changes in the economy, which may actually be accelerated by the outbreak. The S&P 500 weights companies by market capitalization, meaning it increases exposure to companies with improving business prospects and rising stock prices, and it decreases exposures to those with worsening fates.

Already, people have been avoiding department stores and brick and mortar retailers, and driving more efficient vehicles, cutting back on oil and gas consumption. Movie theaters are being made obsolete by streaming media services. By design, the S&P has done a near-perfect job keeping up with these changing economic trends and consumer habits.

Investors, meanwhile, have spent the past decade bidding up the stock values of cash-generating software and internet companies, and have been abandoning stocks in companies with heavy debts and large pension obligations, or those exposed to economic cycles. Here again, the S&P 500’s algorithm has been trimming holdings in burdensome industrial companies and auto manufacturers. Information technology, the most heavily weighted in the index has fallen about 5% over the past month, but is still up 23%-plus over the past year.

In 2007, at the outset of the financial crisis, Berkshire Hathaway’s Warren Buffett famously predicted an ordinary investor in an S&P 500 index fund would beat just about any hedge fund on Wall Street. Buffett offered a $1 million bet—payable to charity—to anyone who thought they could pick hedge funds that would beat the index over the ensuing decade.

A hedge fund investor named Ted Seides took up Buffett’s wager. It wasn’t even close. Seides conceded a loss in 2015, waving a white flag of defeat before the decade was over. The S&P returned 8.5% annually over that ten-year stretch, while the average hedge fund failed to deliver half that return.

The reality is as follows: Market corrections like the current one are frightening. But sometimes, the smartest play is also the easiest. With an investment in the S&P 500, the house is on your side.