Breaking
Everything You Need to Know About Corporate Social...
Is Adaptive Leadership the Key to Motivating Employees?
Why business events are set to return with...
Business events set to return with a bang!
Expanding Internationally: 5 Things to Consider for eCommerce...
How the Machine Shop Is Going Digital in...
Sustainable Food Packaging Is Helping the Hospitality Sector...
Top 5 Investment Practices To Make More Money...
Managing IT Requirements for SMEs: 5 Aspects that...
How To Build a Successful Luxury Brand In...
Finding The Best Google AdWords Consultant for Your...
8 Top Tips To Help Your Agricultural Business...
Three Reasons Why Office Décor and Design Are...
Looking To Improve Efficiency In Your Business? Here’s...
AI and machine learning for business
How Social Media Changed the World
Home Business Will Most Airlines Ground The A380 Forever Due To Coronavirus?
Business

Will Most Airlines Ground The A380 Forever Due To Coronavirus?

With over 40 major airlines around the world grounding their entire fleets and many others suspending more than 90% of flights, the last few weeks has seen several airlines retire larger widebody aircraft earlier than planned. 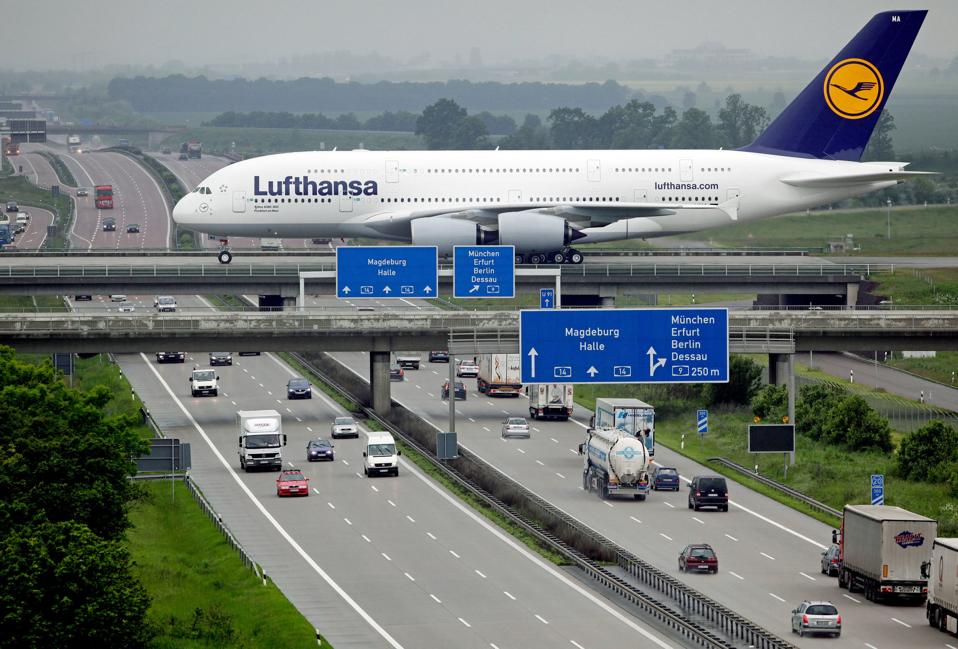 One of the most popular passenger planes over recent years has been the a380 double-decker superjumbo.

However, Airbus announced in 2019 that production of the world’s largest passenger plane ever built is due to end in 2021. A weak backlog of orders has meant that the a380 program simply did not have the customers or demand from airlines to warrant continuing production. 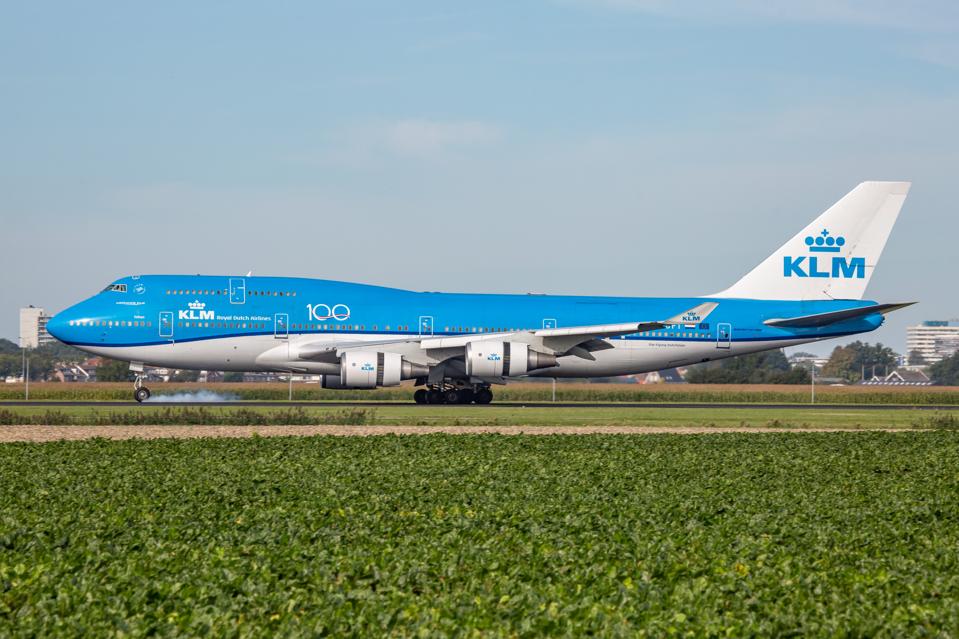 KLM retired their last 7 Boeing 747 aircraft early in March. KLM Royal Dutch Airlines Boeing Jumbo … [+] Jet 747-400M airplane as seen on final approach landing, touch down and rubber smoke at Polderbaan runway 18R/36L from the landing gear wheels at Amsterdam Schiphol International Airport AMS EHAM in the Netherlands on 16 October 2019. The wide-body, heavy, long-haul 747 or B744 aircraft has the registration PH-BFT, the name Tokyo / City of Tokyo, has a 4x GE CF6-80 engines and a 100 years anniversary logo sticker on the fuselage. The airliner is a mixed passenger and Freight or Combi variant. KLM KL Koninklijke Luchtvaart Maatschappij airline is the flag carrier of the Netherlands, based at the Dutch capital and member of SkyTeam aviation alliance. (Photo by Nicolas Economou/NurPhoto via Getty Images)

Before the onset of the coronavirus outbreak, air travel demand was set to continue to increase globally, led by substantial increases in demand from China and India particularly. Airbus hoped that more airlines would order the a380 to not only consolidate routes with high demand but also to alleviate pressure on congested airports around the world.

The a380 can carry up to 853 passengers in an all-economy layout, but most airlines have opted for a three-cabin configuration of around 525 passengers on average. This is about 100-150 more passengers than the next largest jets, the Boeing 747-8 and the 777-300. 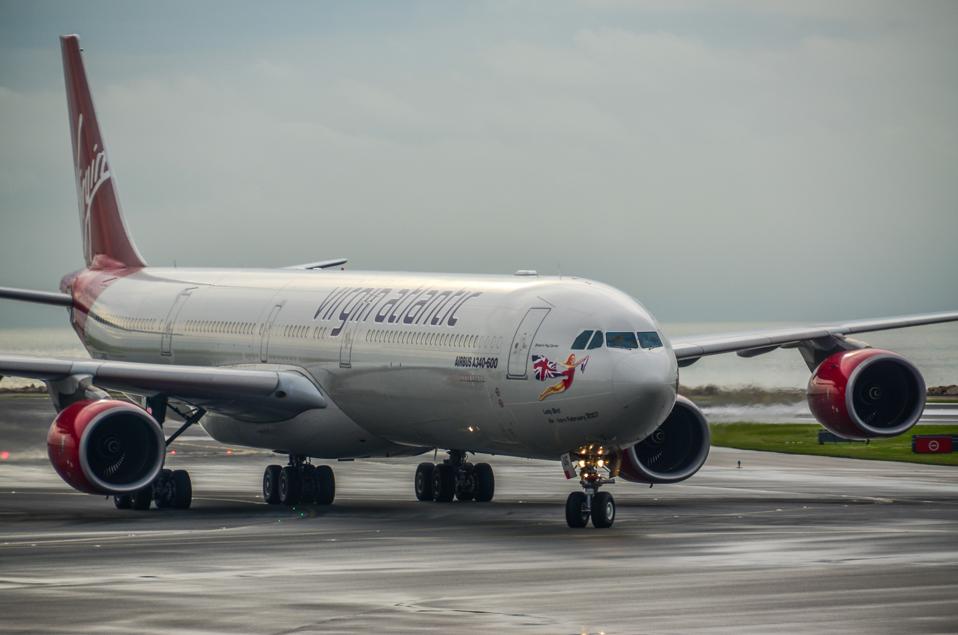 An Airbus A340-600 operated by Virgin Atlantic advancing on the taxiway after touching down at Hong … [+] Kong International Airport. Last week the Dutch national airline KLM retired their last Boeing 747 jumbo jets early and Virgin Atlantic has already brought forward the retirement of their a340-600 aircraft. (Photo by Stefan Irvine/LightRocket via Getty Images)

However, with the exception of Emirates, who ordered over 100 a380s, the superjumbo did not sell anywhere near as well as Airbus was hoping, which led to the program being scrapped.

The main concern for airlines was that operating flights with over 500 seats was too great a risk. Granted, when the a380 was completely full the aircraft generated huge profits, however, if seats were not sold on flights, the aircraft quickly sustained heavy losses. 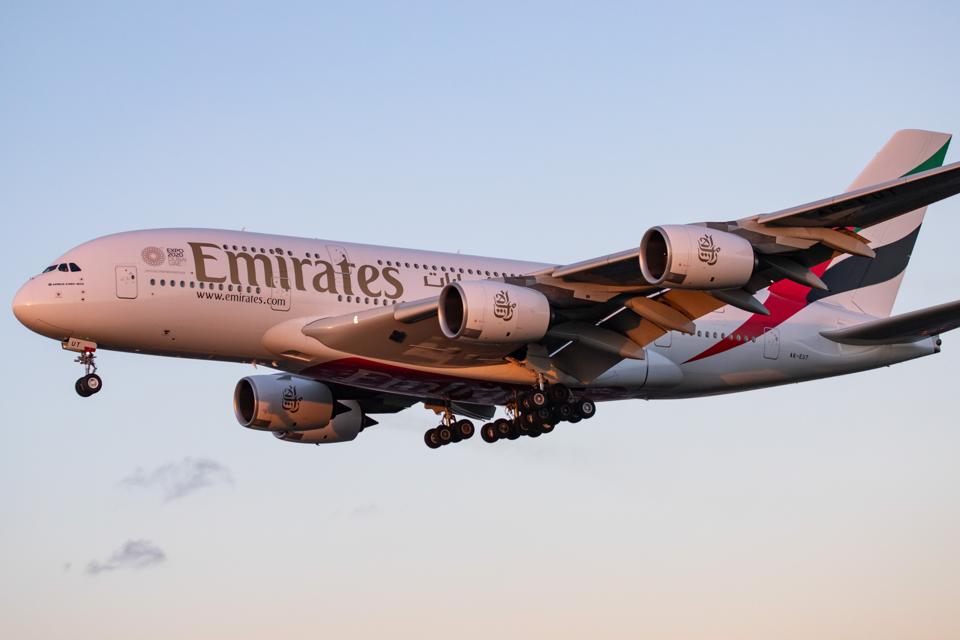 Emirates Airbus A380 shown landing at London Heathrow International Airport LHR / EGLL in England, … [+] UK over the residential area of Myrtle Avenue. The aircraft registration is A6-EUT. Emirates connects Dubai DXB with London with the double-decker airplane that recently was announced from Airbus that the production will be stopped in the near future. (Photo by Nicolas Economou/NurPhoto via Getty Images)

In March, The International Air Transport Association warned that airlines may lose $113 billion in sales in 2020 due to COVID-19. With increased groundings and lack of clarity on the aviation market since this statement, that number is set to increase.

Therefore, the future of the a380 in the short term looks bleak. Many airlines are currently requesting government support and fighting for survival, and when international routes do start opening up again, it is highly likely that some of the weaker airlines that operate the a380 will be in no rush to re-introduce the aircraft to service. 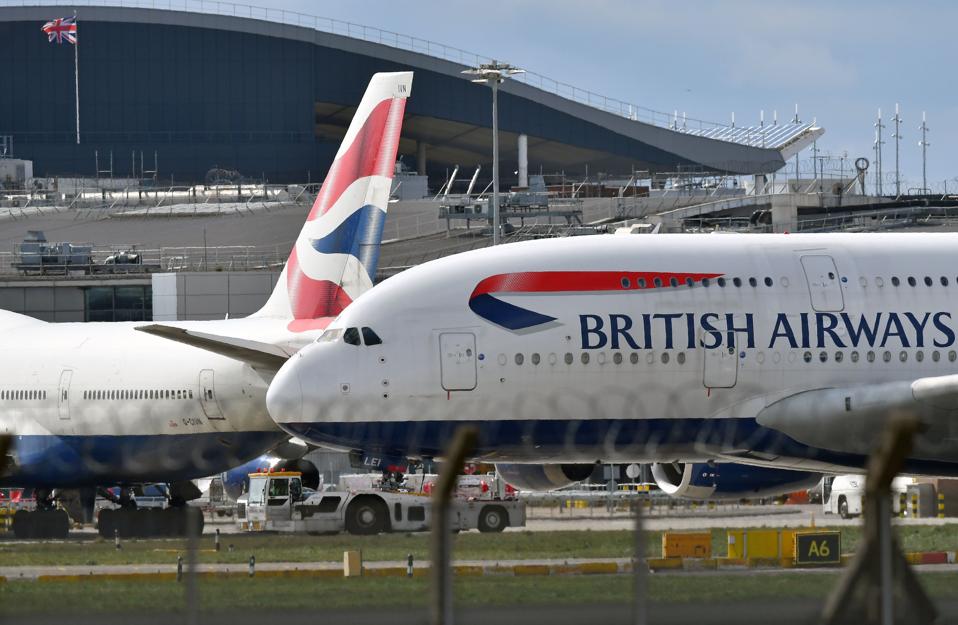 A Union flag flies above a hangar as a British Airways operated Airbus A380 passenger jet is moved … [+] by an aircraft tractor at Heathrow Airport, west of London on April 2, 2020, as life in Britain continues during the nationwide lockdown to combat the novel coronavirus COVID-19 pandemic. – Flagship airline British Airways will temporarily lay off 28,000 employees, or 60 percent of its workforce, due to the coronavirus crisis which is paralysing the sector, trade union Unite announced Thursday. (Photo by Ben STANSALL / AFP) (Photo by BEN STANSALL/AFP via Getty Images)

Emirates currently operates 115 a380 superjumbo, and the aircraft is the mainstay of the airlines fleet. Although some a380s may now be retired early by Emirates if passenger demand doesn’t robustly bounce back, the airline is certain to continue to operate the aircraft.

British Airways will also very likely continue to operate the a380 on major routes from London. These would include high demand routes such as Hong Kong, Singapore and Los Angeles. The U.K. airline could also potentially consolidate flights onto larger aircraft for high-frequency routes such as London Heathrow to New York JFK, which sees as many as 12 flights per day. Currently, many of these flights are operated on less fuel-efficient and older Boeing 747 and 777 aircraft which the carrier could also retire early. With British Airways’ largest long-haul domestic competitor, Virgin Atlantic, struggling financially, I would also expect there to be few concerns with British Airways filling seats on their a380 superjumbos. 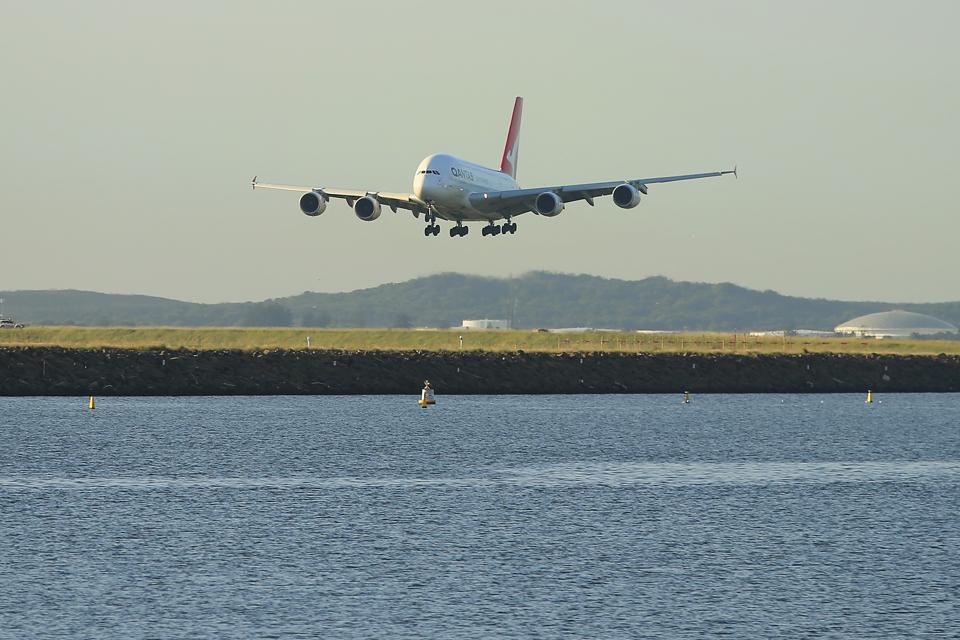 SYDNEY, AUSTRALIA – MARCH 25: A Qantas A380 lands at Sydney Airport on March 25, 2020 in Sydney, … [+] Australia. Prime Minister Scott Morrison has announced further restrictions on Australians as the government works to stop the spread of COVID-19, including a ban on all international travel from Wednesday. There will be exceptions for aid workers and for compassionate, work-related and other essential travel. A new phase of shutdowns for Australian businesses will also come into place from midnight on Wednesday, closing all libraries, museums, galleries, beauty salons, tattoo parlours, shopping centre food courts, auctions, open houses, amusement parks, arcades, indoor and outdoor play centres, swimming pools, and indoor exercise activities. These new measures are in addition to the closure of bars, pubs and nightclubs on Monday, and restaurants and cafes restricted to providing takeaway only. Weddings will now be restricted to five people including the couple. Funerals will be restricted to 10 mourners. All Australians are now expected to stay at home except for essential outings such as work, grocery shopping and medical appointments. Exercising outdoors alone is still permitted. there are now 2317 confirmed cases of COVID-19 in Australia and the death toll now stands at eight. (Photo by Mark Evans/Getty Images)

The only other obvious candidate to continue operating the a380 is the Australian carrier Qantas. Although the airline has asked the Australian government for financial support, it is unlikely that the a380 would be removed from the prize “kangaroo route” that links Sydney and London, or other lucrative U.S. West Coast routes such as San Francisco and Los Angeles.

Apart from those three airlines, many of the other a380 operators could well retire the aircraft early. The prime concern will be their ability to fill over 500 seats with uncertainty over demand.

Three additional airlines that will still likely operate the a380 are Singapore Airlines, Etihad and Qatar Airways. The reason being is that these aircraft showcase these carriers highest quality product and all three airlines receive government backing. They would have the ability to fly the a380 again through a period of weaker demand. All three of the aforementioned airlines have either onboard bars or lavish first class suites on their a380 aircraft. Operating the a380 is as much of a marketing tool as is it a profitability tool for Singapore Airlines, Etihad and Qatar. 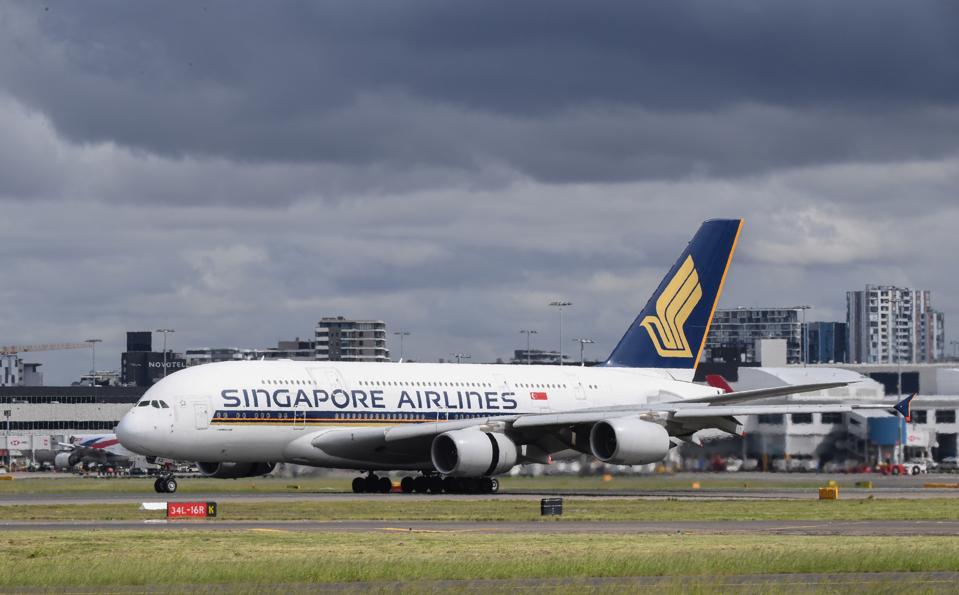 A Singapore Airlines A-380 Airbus aircraft on the runway at Sydney’s main international airport, … [+] Kingsford Smith, on March 15, 2020 in Sydney, Australia.

However, some obvious candidates could be set to retire the a380 early, or at the very least ground the aircraft for the foreseeable future.

Air France was already in the process of scraping its oldest a380 jets before the coronavirus outbreak spread across the world. Similarly, Malaysia Airlines attempted to sell its six a380 aircraft in 2018, but after no buyers were found the struggling airline has mostly been operating the superjumbo on Hajj pilgrimage flights.

It would come as little surprise to see both Air France and Malaysia Airlines grounding their a380 when international flights resume, and Korean Air, Thai Airways, Lufthansa and Asiana are also likely contenders to ground the jet for the foreseeable future. the a380 makes up a small part of these airlines fleets with Asiana and Thai operating just six of the double-decker plane and Lufthansa operating 14 aircraft. 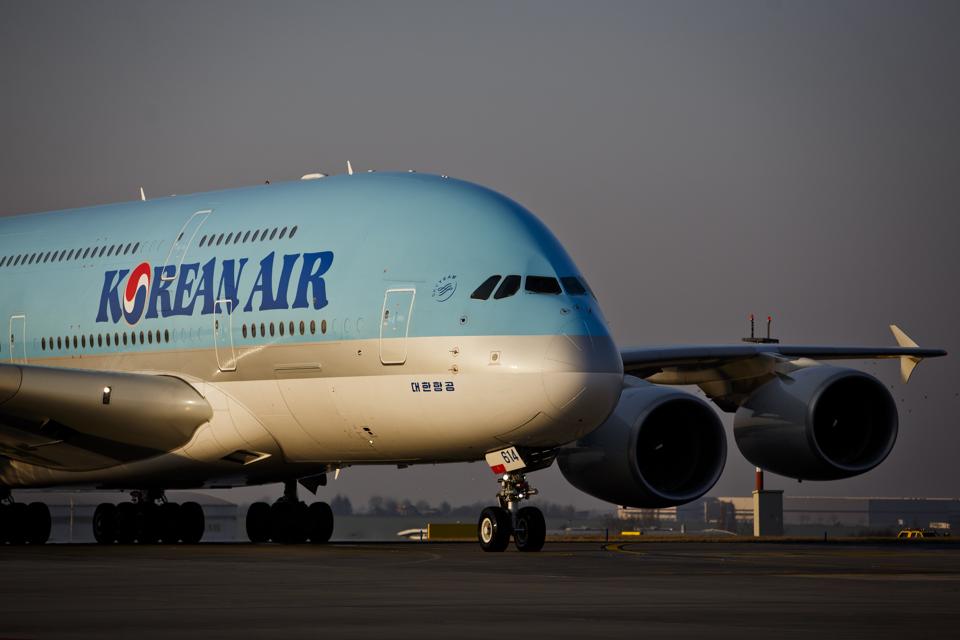 An Airbus A380 operated by Korean Air taxis on the tarmac at Vaclav Havel airport. Korean Air has … [+] said it may not survive the COVID-19 crisis. (Photo by Matej Divizna/Getty Images)

China Southern is the only other operator of the a380, and although the airline has struggled for several years to fill the aircraft on routes away from the U.S. West coast, the Chinese airline would likely be able to utilise the aircraft on domestic routes in China for the foreseeable future.

Therefore, it could well be that nearly half the a380 operators may not fully re-introduce their a380 aircraft when global travel resumes.

How To Make It As A Solo Founder, Especially During Difficult Times