Dark Capital is a series that explores the intersection of business, wealth and crime. It’s featured on Sundays.

When Seymour Durst appeared on the inaugural Forbes 400 list of the wealthiest Americans in September 1982, he was described as the “driving force” behind a $500 million family real estate empire that spanned 100 New York City properties, including a sizable chunk of Times Square, and roughly 3.5 million square feet of office space. And expected to take over it all was his 39-year-old eldest son, Robert. 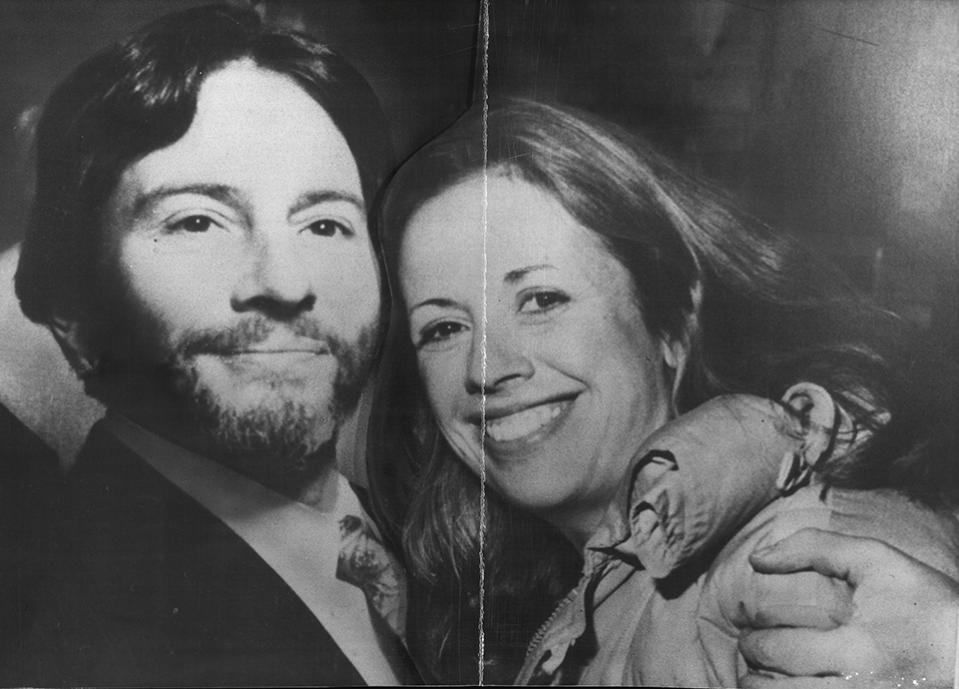 Robert Durst and his wife Kathie met when she was looking for a New York City apartment. They had been married for nine-years when she disappeared.

But Robert Durst and his family would go in dramatically — tragically — different directions in the intervening years. Seven months before that Forbes 400 list was published, Robert’s wife Kathie went missing, and has never been found. Since then, Robert Durst would be a suspect in two murders, confess to dismembering his neighbor, be the subject of a blockbuster documentary where he appeared to implicate himself as a killer, and become a symbol for how society’s most well-heeled seem to be able to get away with just about anything. 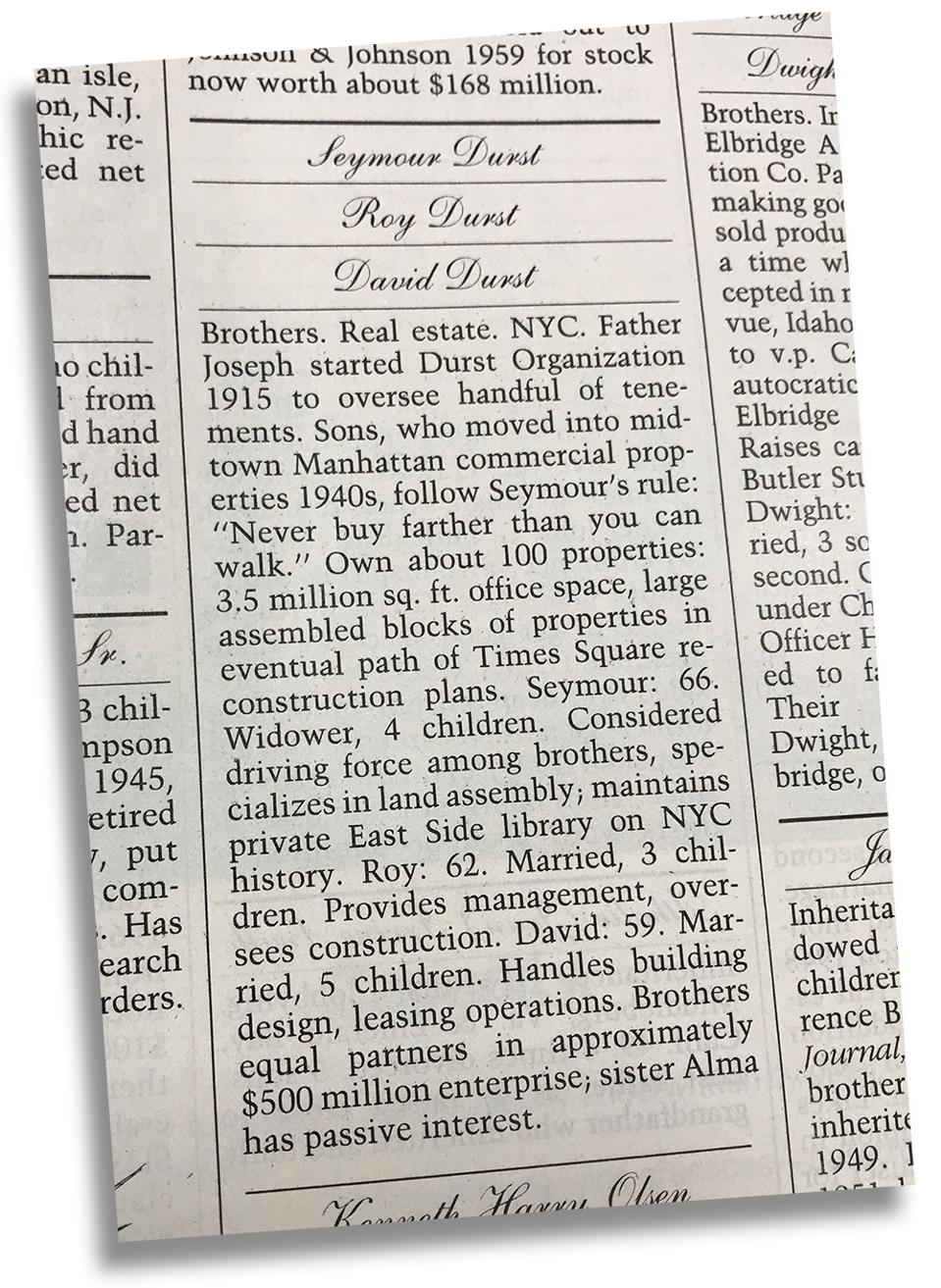 Robert’s father Seymour and two brothers appeared on the first Forbes 400 ranking, in 1982.

The Durst family, however, would only watch its success soar. Its portfolio grew to include New York City’s Bank of America Tower, Four Times Square, and a 10% stake in One World Trade Center. According to Forbes’ 2015 ranking of America’s Richest Families, its fortune ballooned to an estimated $5.2 billion shared by 33 family members – though not Robert, cut off from the family after a $65 million settlement years ago.

They all may be reunited very soon though, when Robert Durst stands trial for murder.

Jury selection begins Wednesday in the criminal case, where Durst is accused of killing his confidant, Susan Berman, at her Los Angeles area home in 2000 to prevent her from telling investigators that he had killed Kathie. He has pleaded not guilty, though he acknowledged in December that he had written an anonymous note that directed police to his friend’s body. And it remains a possibility that Robert’s younger brother, Douglas Durst — who inherited the company, and led it to great success — could testify against him. When his brother was arrested for Berman’s murder, Douglas Durst issued a statement that read in part, “We hope he will finally be held accountable for all he has done.” When asked if Douglas Durst would be called as a witness, neither The Durst Organization nor prosecutors would comment.

Whether his brother testifies against him will be just one of the many mysteries that victims’ family members and a public gripped by Durst’s scandals through the years hope will finally be revealed in the case.

Robert and Douglas’ grandfather Joseph immigrated to the United States in 1902 from what is now Poland with $3 to his name. He was a tailor and partner at dressmaker Durst & Rubin, and eventually bought his first building, in Manhattan’s Garment District in 1915 while adding to his holdings through the Depression. Seymour, took over as president when his father died, eventually becoming known for assemblage—using assumed names to patiently buy up small parcels that would create blocks large enough to build skyscrapers. 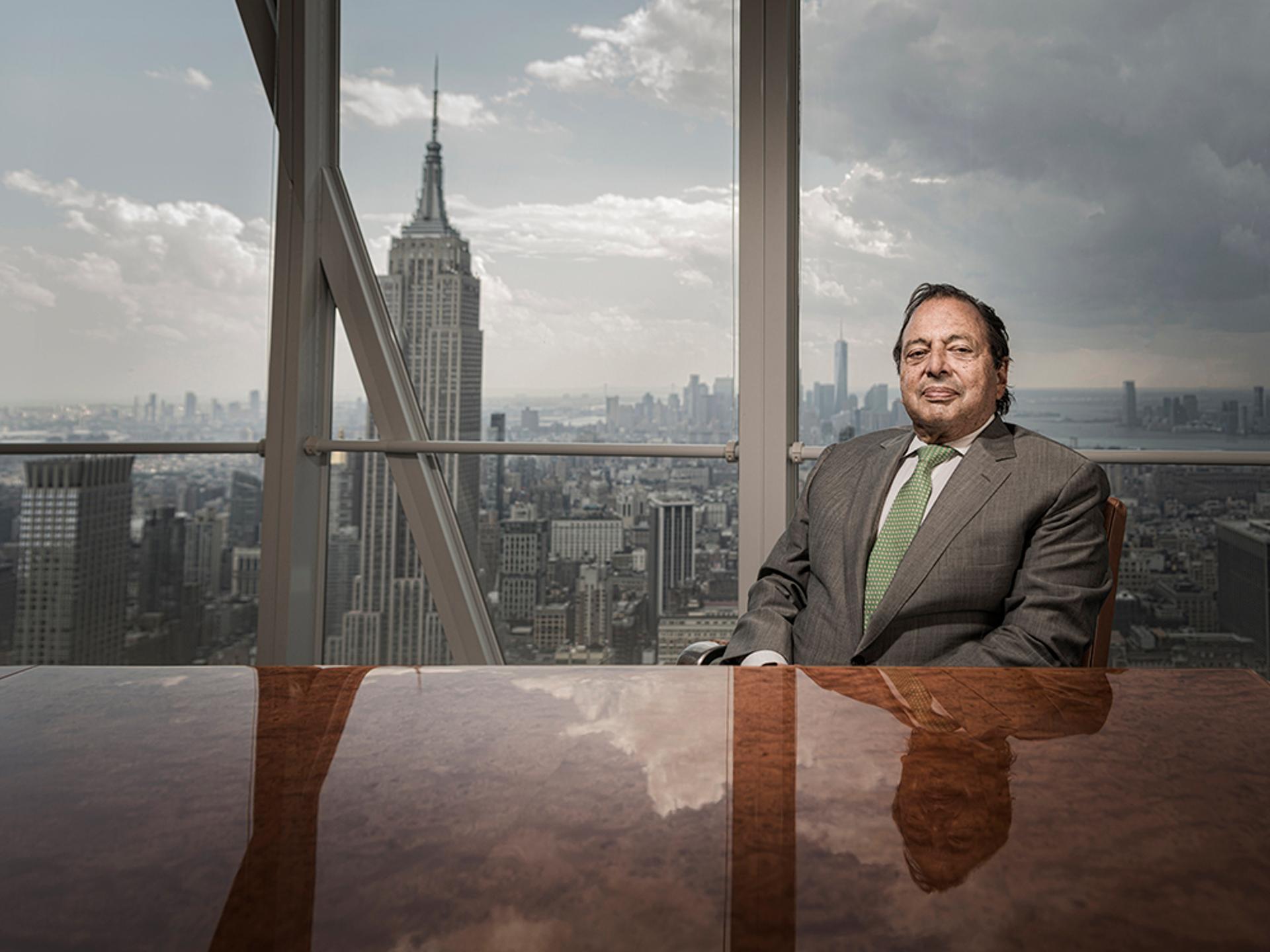 In 1950, Seymour’s wife Bernice, then 32, fell to her death from the roof of their Scarsdale home. Robert was seven at the time, and claims he saw his mother fall, a memory that is dramatically reenacted in HBO’s documentary on him, “The Jinx.” His brother Douglas has said of the story, “It isn’t true.”

It’s one of what seems like a life of disagreements between the two brothers. Both entered the family business, but Robert’s interest in real estate was fleeting at best. He told documentarian Andrew Jarecki, who would eventually make “The Jinx,” that his father once tried to guilt him into joining the business while visiting his mother’s grave. “Please let me, when I come here, know that the business is being taken care of by you,” Robert said his father told him. Robert attended graduate school at UCLA (where he met Berman), and after marrying Kathie in 1973, the young couple lived in Vermont and ran a health food store.

“When I was in Vermont, you know, we were all hippies. And I would wear what I wanted to wear,” Durst said in an interview with Los Angeles Deputy District Attorney John Lewin, following his 2015 arrest. “Working in the family business, in New York City, where a whole bunch of lawyers and other executives, dressing in the uniform that you dress in, it — it just wouldn’t work for me not doing it, even though I am me.”

But Robert did eventually return to New York from Vermont, and he kept a sharp-pointed plumber’s wrench on his desk, according to his brother Douglas, who in turn kept a piece of pipe. In a 2015 Times interview, the only time he’s spoken at length publicly about Robert, Douglas accused his brother of siphoning hundreds of thousands of dollars from The Durst Organization while working in its rent-arrears department. “From the family, it was just a bizarre thing to do, because they would have just given him the money,” Douglas said.

At the time, Robert was receiving large annual payments from two family trusts, which gave him 1/13 stake in the family’s real estate holdings. Seymour and his siblings set up identical trusts for their children (13 altogether) in 1962, when Robert was 19.

As the oldest, Robert was designated as his father’s successor, which meant he would be head of the many trusts and run the family business. By the early-1990s, however, Seymour transferred control to Douglas. The final straw, Douglas has said, was when Robert urinated in his uncle’s office wastepaper basket. After power officially passed to Douglas in 1994, Robert stopped showing up for work, and when their father died six months later, Robert did not attend the funeral.

Durst had fled to Galveston, Texas, in order to avoid questions about Kathie’s death from police, he later told investigators. The New York case had been reopened and appeared to be focused on him. But by October the next year, he was arrested and charged with murder after body parts belonging to his elderly neighbor, Morris Black, were found in Galveston Bay. He was released on $300,000 bail, but quickly skipped town—only to be arrested outside of a supermarket in Pennsylvania after trying to shoplift a sandwich.

Eventually, at trial in 2003, Durst admitted to dismembering Black. His lawyers argued that it was all a mistake, that he dismembered and tried to hide Black’s body because he feared no one would believe he was innocent, and he was acquitted on murder by a Texas jury, serving only five years for jumping bail and evidence tampering.

Roughly during this same time period, the Durst family appeared to begin taking steps against Robert. He had married Debrah Lee Charatan in a private ceremony on December 11, 2000—just weeks before his friend Berman’s murder—but kept it a secret from the family, which did not learn about the marriage until October 2001, after Robert was arrested in the Black case. They quickly filed changes to the trusts’ inheritance rules in that would prevent Charatan from claiming Robert’s share, which would later cause Robert to sue.

The two sides eventually settled, with Robert giving up his rights to the trusts in exchange for a payout of around $65 million, with about a third of that reportedly going to Charatan. 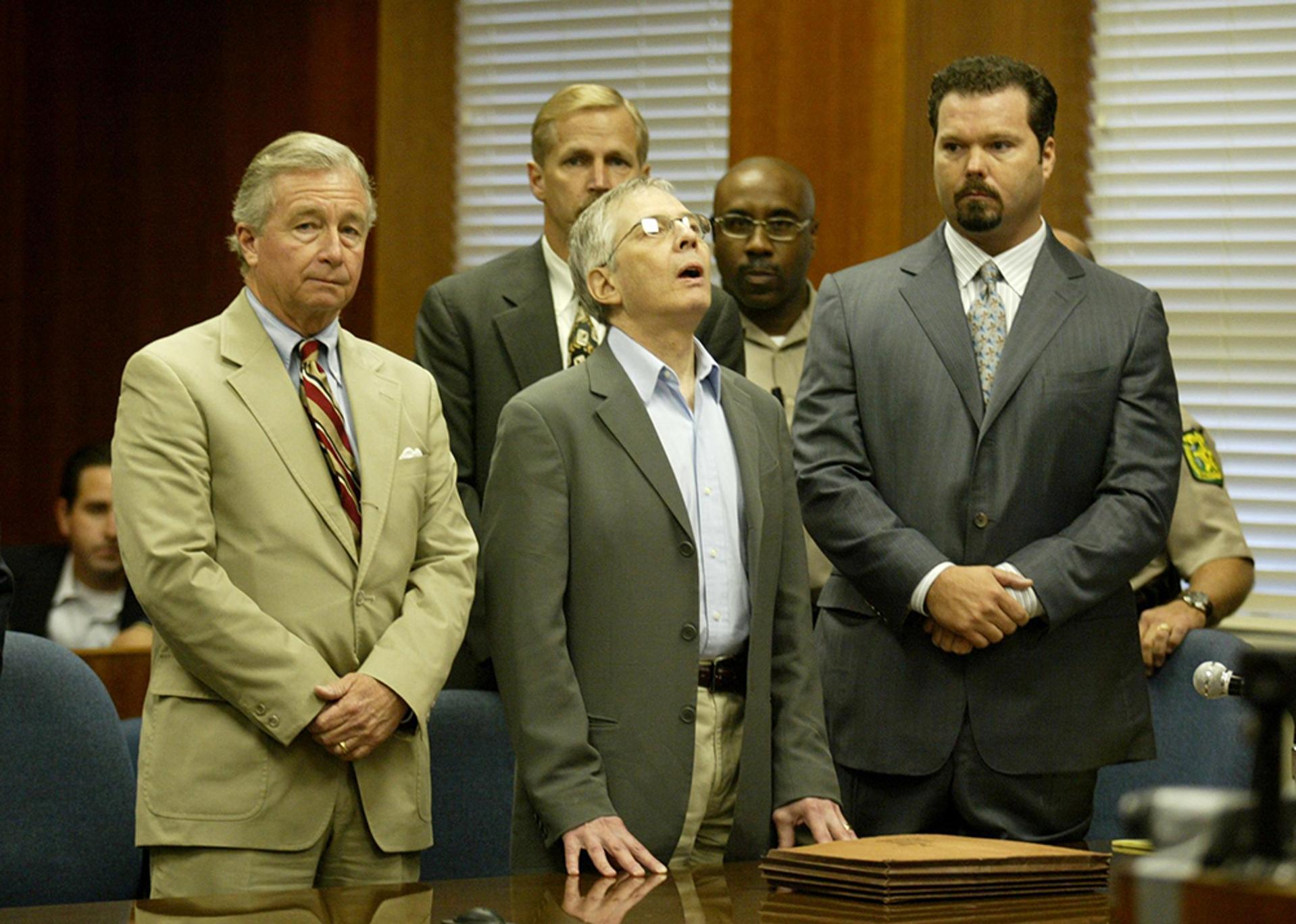 Not guilty verdict for Morris Black

Then he gave hours of interviews to filmmakers for “The Jinx,” which chronicled all the suspicions surrounding him in a six-part-series. It concluded with a recording of Durst seemingly talking to himself in a bathroom: “What the hell did I do? Killed them all, of course.” The audio editing of that statement has been the subject of much controversy, but it nevertheless helped to reopen the Berman case, and Durst was arrested on March 14, 2015, the day before the final episode aired, and was eventually charged with one count of murder. He pleaded not guilty.

The Durst Organization has seemingly continued to grow unabated, enjoying the esteem of peers in the industry. “It’s an amazing family,” Steven Spinola, then president of the Real Estate Board of New York, told Forbes for a 2014 profile of Douglas. “Are they controversial? I think if you’re not controversial, you’re not good at what you do.” Darcy Stacom, chairman and head New York City capital markets at CBRE, recently said: “I’ve known them for 40 years and [the controversy] has never colored in any way how I do business with them and I don’t believe it is a factor in their reputation.”

And it is quick to emphasize it’s distance from Robert Durst. “Robert has been estranged from the family and the company for nearly 30 years,” Jordan Barowitz, spokesperson for The Durst Organization, told Forbes. “The Durst Organization’s success over the last 30 years is a credit to the leadership of Douglas and [cousin] Jody Durst.”

And at least in that, Robert Durst and his family, are finally in complete agreement. “Bob Durst didn’t kill Susan Berman and he doesn’t know who did,” wrote his defense attorney, Dick DeGuerin, in an email to Forbes, before adding, “He has no relationship with the Durst Organization or family.”

Squash Courts Are The New Must-Have Amenity In...

Here’s Why One Electric Car Is Outselling All...

How Technology Can Help Combat The Spread Of...