Breaking
Looking To Improve Efficiency In Your Business? Here’s...
AI and machine learning for business
How Social Media Changed the World
Shopify: The Pros and Cons
Should your business go green?
Expanding Your Business Into Spain: What You Need...
Essentials For Your Office Coming Out Of COVID-19
What Can Marketers Learn From Digital Cults?
Why NASA’s James Webb Space Telescope Will Never...
Increasing HR Effectivity and Efficiency through Software Solutions
The Difference Between Building A Startup In Bull...
Fluor Corp Ranked Among Today’s Top Shorts
Common Pitfalls to Look Out for When Buying...
Will the Olympics go ahead this year?
Pack Up the Big Top: Insights from MozCon...
Best WordPress Themes for Blogs
Home Business Will There Be A Renaissance After The Coronavirus Crisis?
Business

Will There Be A Renaissance After The Coronavirus Crisis? 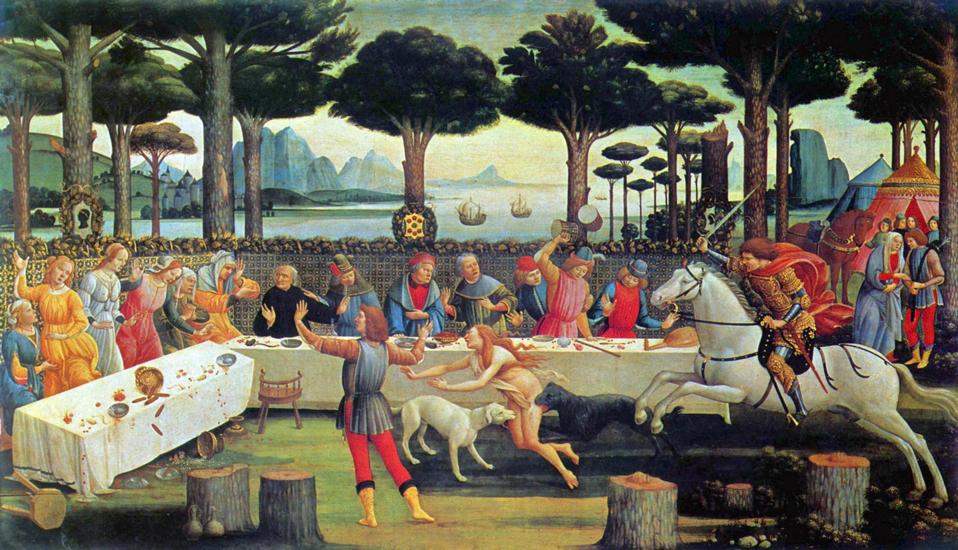 Giovanni Boccaccio’s Decameron was one of the first literary masterpieces of the Renaissance. It is set in a villa outside Florence, at the height of the Bubonic Plague. Seven women and three men flee the Plague, ensconce themselves in a villa and spend ten days flirting, philosophising and debating. I have no doubt that Netflix NFLX or other entertainment channel will copy the idea and send an ensemble of Hugh Grant, Gwyneth Paltrow, George Clooney, Mara Rooney and friends off to the Hamptons to repeat the experience.

If the Decameron were to be repeated, the guests in the villa might even ponder how the world has been changed by the coronavirus. The Black Death itself radically changed Europe, largely through the demographic effect that a 30% reduction in population had – in England nearly 40% of land changed hands, a shortage of labourers meant a rise in wages and innovation of farming methods and produce.

Rising wages for those who survived the Black Death altered the social mix (Walter Scheidel’s The Great Leveler is very good here) to the extent that the wealthy begun to dress more extravagantly in order to distinguish their social standing and in this were helped by regulation (i.e. England’s Sumptuory Laws 1363).

The Black Death altered the geopolitical map of Europe (similar, much earlier plagues like the Athens Plague and Antonine Plague had profound geopolitical effects), led to trade and banking revolutions and spurred the rise of cities like Madrid and Genoa, and the demise of others like Winchester.

Back to the villa, where if our guests were discussing the post coronavirus world they might fall upon the following points. First, the coronavirus crisis has simply exacerbated the faultlines in a fracturing world – indebtedness is growing rapidly, the China-US diplomatic relationship deteriorates, and globalization is crashed.

Second, more optimistically and in the spirit of the Renaissance, the crisis will I hope bring a number of positive changes. One is the realisation of the correlation between climate damage and economic activity. Another is the sense that our cities are places to be lived in – there will be significant changes to the way cities use space, transport and commercial real estate.

A more profound change will be a trend towards improving human development – in developed and developing countries. The components of human development – from life expectancy, to education and healthcare, to economic development – have come to the fore during the coronavirus crisis in the sense that countries with high levels of human development (Germany, New Zealand, Norway) have appeared to deal relatively better with the crisis than others, and the value of good, accessible healthcare systems has become abundantly clear. I might even stretch the point to say that well educated leaders, who take science seriously, have also done reasonably well.

The concept of human development however does not lend itself to political soundbites and as such is hard for politicians to communicate as a policy goal. Neither do initiatives that promote human development pay off in the short term – so politicians need to be around to gain credit for them (Russia is an interesting example where the HDI (Human Development Indicator produced by the World Bank) has been rising steadily). Hopefully, the coronavirus will change this and permit broader discussions on the need to focus government scorecards on human development centric scorecards. If this happens, we may see public goods like accessible education and healthcare become more valued in countries like the US and UK. In this light, there is an opportunity for politicians and those involved in the policy process to craft the idea of human development in a way that people understand and value, and to put it at the centre of political manifestos.

As a final point, when I think of our ten guests in the villa in the Hamptons, Agatha Christie’s book ‘And then there were none’ passes through my head. The idea of wealthy people secluding themselves in a villa to avoid a highly contagious disease is as unpopular today as it was in the 14th century. Again, as Walter Scheidel has pointed out, the Bubonic Plague was a leveller of inequality in the 14th century though amidst plenty of periods of unrest (La Jacquerie in France in 1358 and the Peasant’s Revolt in 1381 in England).

So far, the policy response to the economic fallout from the crisis has arguably boosted wealth inequality. In the coming weeks the generous provision of liquidity by the Federal Reserve will give way to rising solvency/credits risk, and with it more redundancies unfortunately. As I’ve mentioned before in these pages, market volatility will give way to social and political volatility.

How And When To See The ‘Super Flower Moon’ Rise This Week, The Fourth And Final Supermoon Of 2020