Breaking
How To Get Your Startup Business Off The...
How To Create A COVID Safe Construction Site
How to Make a Good First Impression at...
Covid-19 Death Toll In U.S. Passes 200,000
5 Decisions That Will Increase Your Chances Of...
Coronavirus Is Shaping Up To Be Very Bad...
Is It Time For A Bank For Women?
As Israel Locks Down, Its Health Tech Sector...
Buying The Bulge Is Dangerous
5 Strange Things Happening Right Now In The...
The Best Blogging Platforms (In-Depth Review)
How Will The Coronavirus Impact Your Finances?
How Xbox Series X Will Attempt To Avoid...
Virgin Orbit Seeking Over $100 Million As ‘Jaw...
How To Develop The Confidence To Launch A...
USPS Covid-19 Coronavirus Plan To Send Every Household...
Android Circuit: Mysterious Samsung Galaxy, Google’s Next Pixel...
Snowflake: Valuable Lessons For Entrepreneurs
After Man Shoots Fiancee’s Parents, Bloody Footprints Lead...
Home Finance Will We See Another Dot-Com Crash In Tech?
Finance 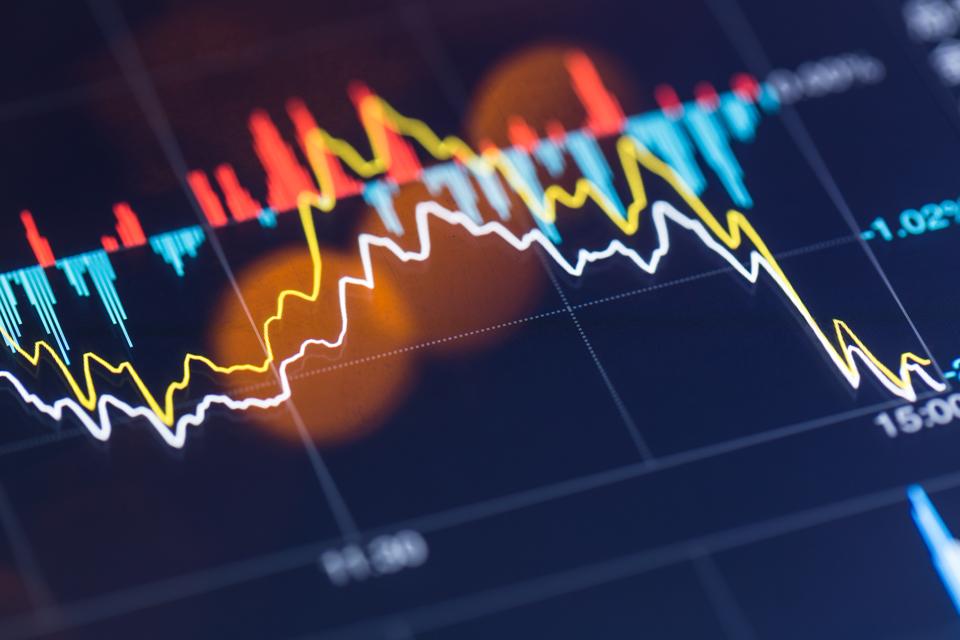 Tech’s comeback since March has been nothing less than spectacular considering the backdrop of record unemployment and contracting GDP. According to a survey of fifty companies by FactSet, 60% had withdrawn guidance for the year. FactSet also estimates that the S&P 500’s earnings for 2020 have fallen 22% since the beginning of the year, while 2021 earnings have declined 13%.

Meanwhile, many tech stocks have reached all-time highs including one-day moves of up to 40% even when companies withdraw guidance. Twilio, for instance, rallied from $122 to $170 based on an 11% revenue surprise with total returns of 140% in the past two months. Twilio is hardly the exception with Teladoc up 115% and Fastly’s one-day move of 40% on May 7th.

Last month, Goldman Sachs analysts said in a financial note that the S&P 500 index concentration in the top tech companies—Facebook, Amazon, Apple, Microsoft, and Alphabet— was the greatest it has been in 20 years. Meanwhile, these mega-cap companies have reported mixed earnings results (Amazon) or pulled second quarter and full-year guidance (Facebook and Apple).

In a picture, this is what that looks like: 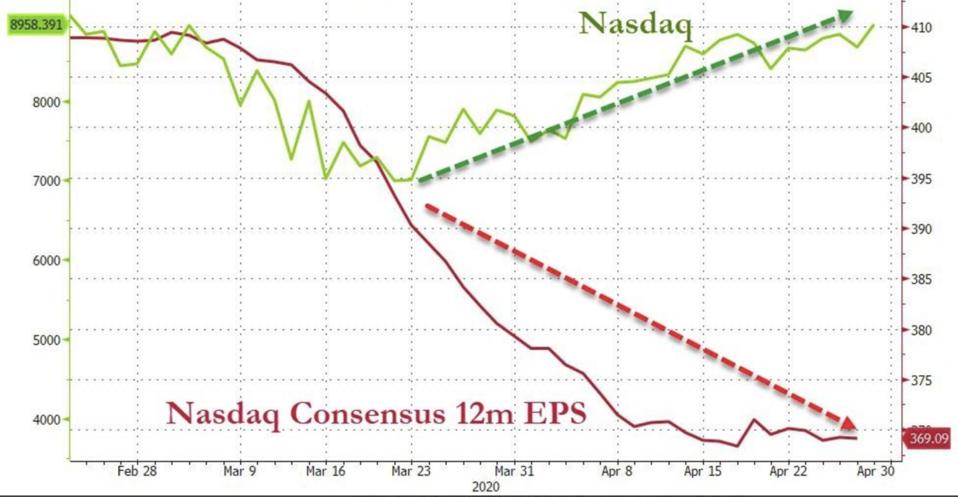 The saying “history does not repeat but it rhymes” has not yet applied to the dot-com bubble, when five years of euphoria burst into a 78% drop in prices over two years. Tech has largely gone unscathed as it has bumped oil from being the number one industry.

There is some solid support as to why this is not a tech bubble. Mainly, technology now runs nearly every industry. The second reason is that higher valuations are more sustainable today as the revenue growth from tech is much higher than other industries.

In addition, cloud software and platforms also allow companies to scale proportionate to revenue growth. There is less overhead and this helps companies keep costs low as you can scale quickly in either direction.

Nearly a decade ago, Marc Andreessen famously said “software is eating the world” in an essay that spelled out how software was disrupting nearly every industry with “real, high-growth, high-margin, highly defensible businesses.” He questioned the low PE ratios of companies like Apple, which at the time was trading at 15 P/E. Notably, Andreessen’s essay came in close proximation to Facebook’s public offering, as well as Zynga, Groupon, Skype and many other exits for his firm’s portfolio.

At the time, he pointed out that fast-growing companies like Facebook and Twitter were conjuring up memories of the dot-com bubble in 2011: “With scars from the heyday of Webvan and Pets.com still fresh in the investor psyche, people are asking, “Isn’t this just a dangerous new bubble?” 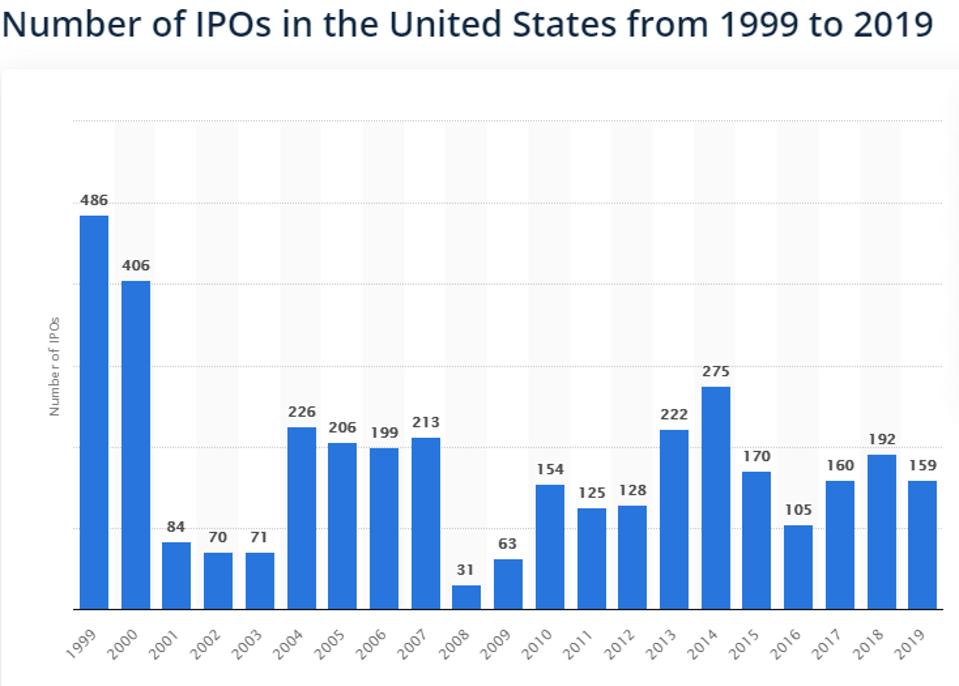 However, the value of IPO exits does look bubble-like. According to Pitchbook, the value of exits for venture-backed companies hit a record $256.4 billion in 2019. 82 venture-based IPOs accounted for 78% of the total value, or $198.7 billion – more than the previous four years combined (this was partly due to Uber and Lyft).

The exits were successful for venture capitalists as the $223 billion in post-money valuations came from $35 billion in venture investment, or a return of 637%. In turn, this means the public markets paid a significant premium.

Also, the years that followed the dot-com bust saw a serious leveling off. It is the absence of early stage deals in tech right now that is more concerning. Pre-pandemic, Silicon Valley was already noticeably quiet.

Forbes also recently reported on the slowdown in venture capital being ill-timed with the effects of the coronavirus forcing many startups to shut down. This followed a 16% drop in venture capital deals in Q4. The CEO of Starsky Robotics stated, “the downpour of investor interest became a drizzle.” As the article points out, the failure rates of 2020 could end up resembling 2001.

Recently, I published on the lack of venture funding in the Series A and Series B stage for tech companies. When combined with the data on initial public offerings from last year, we see a clear signal from venture capitalists that the exit window may be closing (or is already closed).

For instance, as reported by The Information, early-stage software deals in 2019 declined from 388 deals down to 279. In the seed stage, the number was below 200, or the lowest in six years. According to Inc.com and CB Insights, the estimate for Series A funding has dropped from one in three startups to one in six startups with an estimated 1,000 startups not receiving funding this year.

Meanwhile, the public market is flooded with high growth software companies that report over 40% growth due to an inverse law of small numbers. Basically, it’s easier to post rapid growth early-on but harder to sustain this growth.

Many investors focus on valuations as the indication for a bubble. As pointed out, this can be misleading as hypergrowth companies are often outliers. In fact, the companies that challenge key metrics the most are often the ones that see the most upside. Amazon and Netflix are prime examples.

Valuations aside, there is a glut of high-growth software companies on the market that have not been tested by a less-than-ideal economy or slowing business cycle. This may not create a bubble, but it can create losses for both institutional and retail investors as the market attempts to guess the winners and is confronted by those that fizzle out.

The more that startups shut their doors, as well, the fewer cloud software customers there will be as the two ecosystems are closely intertwined. The recent pullback in March did not afford the opportunity to find the stable winners before hyper-speculation resumed.

Disclaimer: Beth Kindig has recommended Twilio stock to her premium readers since December of 2019.

Trump: Without Coronavirus Testing ‘We Would Have Very Few Cases,’ Here Is The Reaction