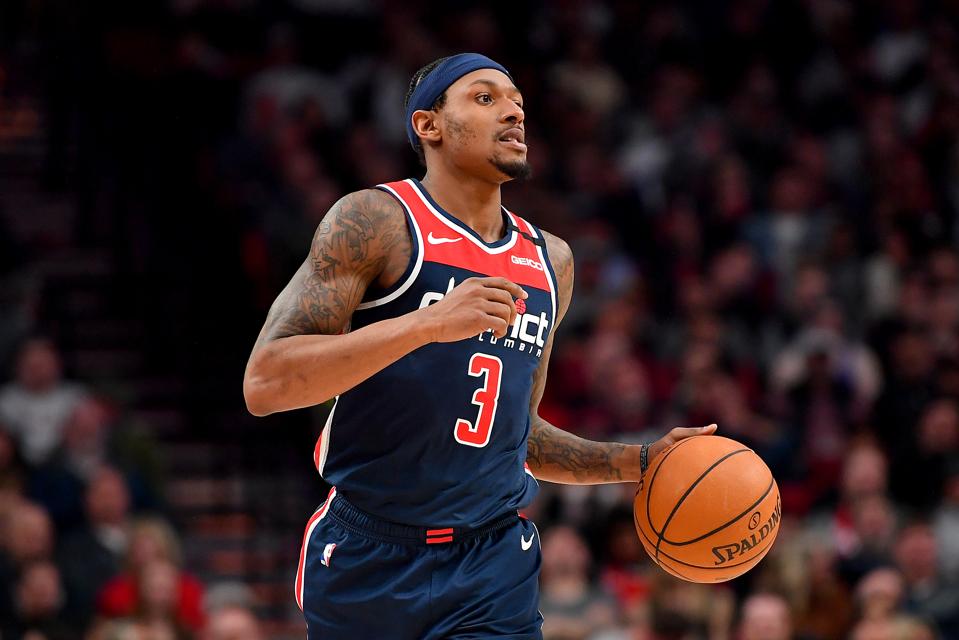 Bradley Beal will miss the rest of the NBA season with a shoulder injury, setting up a depleted … [+] battle for the Eastern Conference’s final playoff spot between the Brooklyn Nets and Washington Wizards. Photo by Alika Jenner/Getty Images

With the Washington Wizards announcing Tuesday that All-Star guard Bradley Beal would miss the NBA’s Orlando restart later this month with a shoulder injury, it seems like nobody really wants the final playoff spot in the Eastern Conference. Or at least, it’ll be a battle of attrition.

The Wizards are 5.5 games behind 8th place Orlando and six games behind 7th place Brooklyn, but only need to be within four games of either team after the eight-game seeding portion of the restart to force a play-in tournament. Washington would then have to beat either team twice, while its opponent would only need to win once, assuming the Wizards finish as the 9th seed, as they currently stand. The two teams play against each other on Aug. 2, the second seeding game on the schedule for both.

“Bradley did everything possible to be ready to play, but after closely monitoring his individual workouts we came to the conclusion that it was best for him to sit out the upcoming games in Orlando and avoid the risk of further injury,” Wizards General Manager Tommy Sheppard said in a news release. “Although he was able to play through the majority of the season with the injury, the layoff from March until now did not leave any of us feeling comfortable that he would have enough time to be ready to perform at the extremely high level we are all accustomed to seeing and agreed that not participating in the games in Orlando was the right decision.”

After a positive COVID-19 test last week, Nets star point guard Spencer Dinwiddie announced Wednesday that he tested positive again this week and has bowed out of the Orlando restart.

Washington will also be missing star forward Davis Bertans, who opted out of Orlando early on in the process to stay healthy and ensure he’ll be healthy for when he goes on the free agent market following the 2019-2020 season. He’s expected to get a lucrative contract in unrestricted free agency.

Brooklyn will be missing a majority of its top players due to both injury and the coronavirus pandemic. Kevin Durant and Kyrie Irving are still rehabbing their respective injuries, Dinwiddie is out, DeAndre Jordan is sitting out the rest of the season after testing positive for COVID-19, rookie big Nicolas Claxton is injured and Wilson Chandler opted out to be with his family.

Beal’s injury announcement is oddly both a blessing and a curse for the Nets. It definitely gives them a better chance at holding on to a playoff spot despite a depleted roster that still features Caris LeVert, Jarrett Allen and upcoming free agent Joe Harris. But Brooklyn’s first round pick this year is lottery protected, meaning it holds on to it if the team somehow misses out on the postseason. With Beal and Bertans out, that possibility looks far more remote.

Hachette Drops Woody Allen: How (Not) To Navigate...

Which of My Competitor’s Keywords Should (& Shouldn’t)...

Why Marty Wikstrom Is My Retailer Of The...