Home Business With FC Dallas Withdrawn And Nashville SC Quarantined, Here’s How To Save MLS Is Back
Business

With FC Dallas Withdrawn And Nashville SC Quarantined, Here’s How To Save MLS Is Back 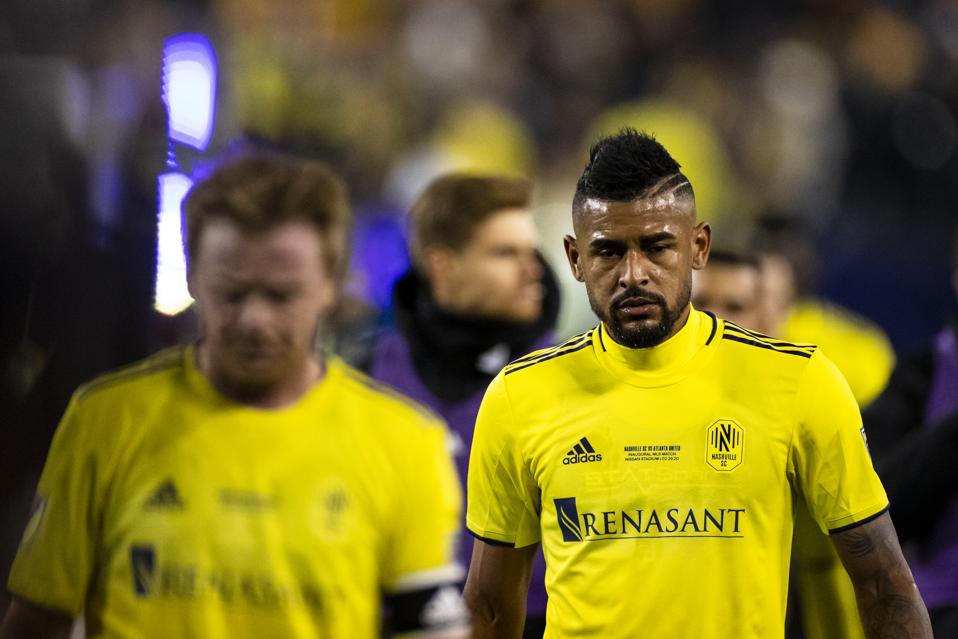 Anibal Godoy, right, and Dax McCarty of Nashville SC walk off the field after the first half of … [+] their regular season opener against Atlanta United on February 29, 2020. According to a report from The Athletic on Wednesday, Nashville is the second team to have a COVID-19 cluster at the MLS is Back Tournament.

Late Monday afternoon, Major League Soccer officially announced FC Dallas would be withdrawn from the MLS is Back Tournament, having been hit hard by a cluster of coronavirus cases that appeared to develop just as the team was traveling to Orlando. Later that evening, Paul Tenorio and Sam Stejskal of The Athletic reported that Nashville SC now has five confirmed cases on its roster and three potential cases that need to be confirmed.

As far back as two weeks ago, this space has questioned the wisdom of hosting the made-for-TV event in a locale surrounded by a drastically worsening COVID-19 hot spot. Even if “The Bubble” at the ESPN’s Wide World Of Sports can keep players and team staff safe, it’s fair ask whether it’s proper while the adjacent community is acutely struggling with public health.

However, if MLS wishes to plow ahead, and if the remaining teams can remain safe now inside “The Bubble,” it might actually make things easier if Nashville joins Dallas in leaving. If that happens, the competition format — including counting group games toward the 2020 regular season — could be salvaged in four easy steps:

If Nashville is withdrawn, their scheduled Group A match against Chicago scheduled for late Wednesday would’ve been the first to be postponed. Shifting the Fire into Group B, which Dallas has already vacated, would then create six clean groups of four. In Group A, the schedules of Inter Miami CF, Orlando City, the Philadelphia Union and New York City FC would be reconfigured into a four-team round robin.

Prior to the tournament, MLS had moved Nashville to the Eastern Conference. This was because it required even numbers in each conference (14 in the East, 12 in the West) to create a schedule where 26 teams all played three matches, all against conference foes. There are also benefits to that alignment when the regular season resumes with an entirely intra-conference schedule. But 14 in the West and 12 in the East also works, and allows Chicago’s group games to count for conference standings.

Hopefully everyone with FC Dallas and Nashville SC will recover and be able to continue the season when it resumes following the tournament. If and when that happens, each team will have three games in hand on the rest of the league. With Nashville now in the West with Dallas, MLS should allow the two teams to resume the season before the rest of the league with a home-and-home. From there, making up one additional game in a compact schedule is more manageable.

Step 4: Reward Chicago for its sacrifice on short notice

Chicago will easily give up the most of the remaining 24 teams under this plan. The Fire will have spent several weeks scouting their Eastern Conference group opponents, and then be forced to make a massive adjustment with little notice. Additionally, when the season re-starts later this year, they’ll face more travel miles than most other clubs, even with potentially short trips to Minnesota, Kansas City and Nashville. The league could reward the club in a few ways: giving Chicago the 2022 MLS-Liga MX All-Star game, doling out extra draft picks or allocation money, or even handing them a 3-point bonus in the 2020 regular season standings.

The Coming Disruption Of Cross-border Payments In Southeast Asia

Could Black Holes Be The Dark Matter Our Universe Needs?

How To Turn Down A Job Offer Without...

Transcript of What Brands Need to Think, Do,...