Breaking
How To Get Your Startup Business Off The...
How To Create A COVID Safe Construction Site
How to Make a Good First Impression at...
Plan To Buy An Electric Car? Is A...
Covid-19 Death Toll In U.S. Passes 200,000
Apple iOS 14 Has 25 Great Secret Features
5 Decisions That Will Increase Your Chances Of...
Coronavirus Is Shaping Up To Be Very Bad...
TikTok: Why Is Everyone In A Tizzy?
Is It Time For A Bank For Women?
As Israel Locks Down, Its Health Tech Sector...
California Increases Homestead Exemption In New Legislation
Buying The Bulge Is Dangerous
5 Strange Things Happening Right Now In The...
The Best Blogging Platforms (In-Depth Review)
How Will The Coronavirus Impact Your Finances?
How Xbox Series X Will Attempt To Avoid...
Virgin Orbit Seeking Over $100 Million As ‘Jaw...
How To Develop The Confidence To Launch A...
Home Business With Historic TV Ratings, Could Tucker Carlson Be Our Next Celebrity President?
Business

With Historic TV Ratings, Could Tucker Carlson Be Our Next Celebrity President?

As political pundits begin to question what the Republican landscape could look like if President Trump loses his reelection bid in November, some Trump followers are already setting their eyes on the President’s celebrity apprentice:

Carlson, the popular host of Fox News’s “Tucker Carlson Tonight,” is one of the most substantial figures in Trump nation, as well as in the broader Republican party. His evening television show is not only the most watched show in its time slot; based the second quarter television ratings report released last week, it is the most watched cable news program in history. Carlson is not only a television figure — his video clips on the Fox News website and his regular on-air commentary provide endless content for his millions of social media followers as well.

But is he presidential material?

Over the past several months, as President Trump confronts the greatest challenges of his presidency, many Republican commentators are beginning to openly question whether the President can beat his Democratic rival, former vice-president Joe Biden, to win a second term. It also appears he is losing some of his grip on a Republican party that he has dominated for the past three and a half years. Suddenly the savviness that made the President a media phenomenon for much of his life is tarnished, and he is facing attacks not only from individuals outside his party, but also from members of his own party. Some of those internal attacks are remarkably harsh, as evidenced by the no-holds-barred approach being taken by his fellow Republicans, and so-called “Never Trumpers” at the Lincoln Project. 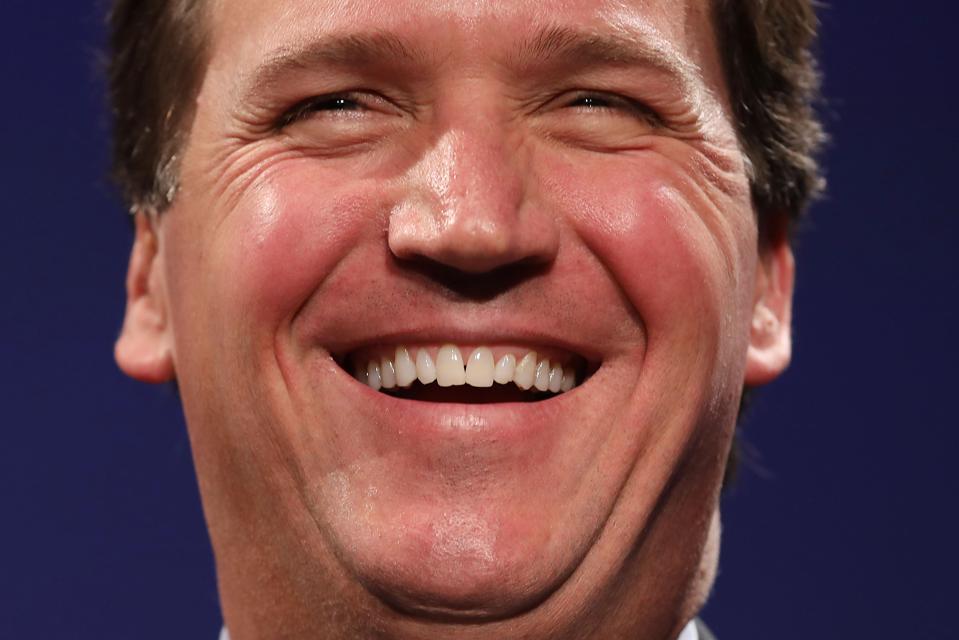 WASHINGTON, DC – MARCH 29: Fox News host Tucker Carlson discusses ‘Populism and the Right’ during … [+] the National Review Institute’s Ideas Summit at the Mandarin Oriental Hotel March 29, 2019 in Washington, DC. Carlson talked about a large variety of topics including dropping testosterone levels, increasing rates of suicide, unemployment, drug addiction and social hierarchy at the summit, which had the theme ‘The Case for the American Experiment.’ (Photo by Chip Somodevilla/Getty Images)

If the President does end up exiting stage left after the November polls close, Carlson would instantly become a leading figure among those who could pick up the MAGA mantel. The 51 year-old celebrity host has much of the same celebrity swagger that President Trump had coming into the presidency, along with a fierce approach to the language of Trumpism that makes the President so popular with his base. But while Carlson, like the President, is incredibly divisive, he also has a reputation for incisive thinking and an ability to zoom out and see the broader contours of the American political landscape. Even his detractors are forced to admire Carlson’s ability to weave his inflammatory language into arguments that are compelling, if not convincing.

While sometimes his monologues get him in hot water, including a recent one that forced Fox News spokesmen to clarify his word choices that many found racially inflammatory, but that only makes him even more appealing to his fervent base of supports. But that is part of Carlson’s appeal — like Trump, his mastery of the medium that shapes so much of American political culture gives him a leg up on many would-be competitors, especially in the era in which voters are even more obsessed with their cable news channel “thought bubbles.” And while a long trail of Carlson’s commentary might give ample fodder for those who would attack him, there is no question those commentaries also paint a clear picture of how a President Carlson might govern.

So, is any of this even remotely plausible? For his part, Carlson never claimed an interest in running for President, and many are skeptical he ever would. But had you asked Americans ten years ago whether they could imagine that the host of “Celebrity Apprentice” would be one of the most consequential Presidents in American history, you would likely have received more than just quizzical looks. The same may be true for Tucker Carlson in 2024, with many thinking that any discussion of him as a possible president is pure fantasy.

But if we have learned anything over the past several years, it is that, for better or for worse, sometimes television can become reality. Where Tucker Carlson currently sits, he has the ability to shift the perception of millions of Americans every day – the question is, in four years, would he want to move from being the shaper of that reality to the leader of it?

Strength In Numbers: This Is The Time For Mergers And Acquisitions