Breaking
ESBC Major Updates: Tons Of Heavyweight Greats Added...
5 On-Demand Courses To Help Develop Your Leadership...
How to Run Nonprofit Marketing Ads
Entrepreneurs Are Bringing Transparency To Home Buying And...
Best Incentive To Get Vaccinated: Money, Messaging, Or...
Page Level Query Analysis at Scale with Google...
How A CIO Can Align IT With Business...
Blogger of the Month: Jo, Girl Eats World
6 Things Women In Business Know That Men...
How to Use First-Party Data for Ad Personalization
Pressing Reset—Putting A Fallen Unicorn Back On Its...
How We Went Viral: Promoting Content with Influencers,...
Blame Olympic Record Price Tag For Return To...
Apple iOS 14.5 Release: Should You Upgrade?
How to Come up with Podcast Topics and...
Why Gaming Gear Company Razer Launched A $50...
Home Business With New COVID-19 Outbreak Linked To Gay Man, Homophobia On Rise In South Korea
BusinessTechnology

A new outbreak of coronavirus in South Korea connected to clubs frequented by LGBTQ+ people has led to a rise in reports of homophobic speech. 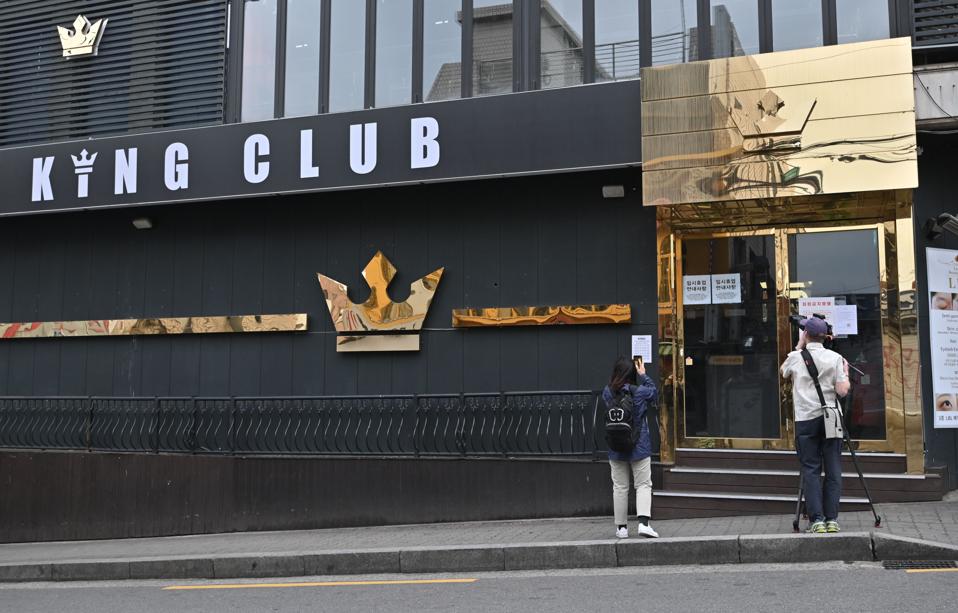 A cameraman takes video footage in front of a night club now closed following a visit by a confirmed … [+] COVID-19 coronavirus patient, in the nightlife district of Itaewon in Seoul on May 12, 2020.

Over 100 new coronavirus cases in South Korea have been traced to Seoul nightlife spots, all of which have temporarily closed, with a 29-year-old man identified as an original spreader.

South Korean news outlets reporting on the new outbreak have focused on the man’s sexual orientation and reported that he visited only gay venues, and included detalis allowing the man’s identity to be determined, according to CNN.

After a story on the man was published in Kookmin Ilbo, a newspaper founded by a church, social media was flooded with homophobic language and messages placing blame on the man and homosexual clubbers for reviving coronavirus, according to the Associated Press—and CNN reports that gay South Koreans have received threats on the dating app Grindr.

A gay rights activist in South Korea told CBS News that inbound inquiries to his group have increased 70-fold, with the majority coming from gay men who fear they could lose their jobs if they are tested and need to self-quarantine.

South Korea is a relatively conservative country: gay marriage is banned and the country has yet to have a prominent gay public official or business executive, according to the AP.

South Korea has been regarded as a global example for contact tracing, which relies on a combination of government surveillance and citizen cooperation. With the nightlife outbreak, 2,000 of 6,000 people who provided their contact information to the affected clubs upon entry could not be reached, meaning they gave fake numbers or avoided the calls. The government utilized cell tower triangulation to track them down, reports CNN.

South Korea is not the only country with rising homophobic sentiment related to the pandemic: Turkey’s top Muslim cleric said in a Friday Ramadan announcement that the country condemns homosexuality because it “brings illness,” which was supported by the Turkish president, according to a report by Ekathimerini.

In addition to homophobia, coronavirus has spurred xenophobic, antisemitic and racist expression by people looking to scapegoat minority groups for the rise of the disease, reports the ADL. Much of these attacks are taking place on social media platforms, which the anti-hate organization believes could translate—like a “tinderbox”—to actualized hate as a product of viral virtual spread.