Home Business With Playoffs Drawing Near, The Steelers Are Hoping Duck Can Bounce Back
Business

With Playoffs Drawing Near, The Steelers Are Hoping Duck Can Bounce Back 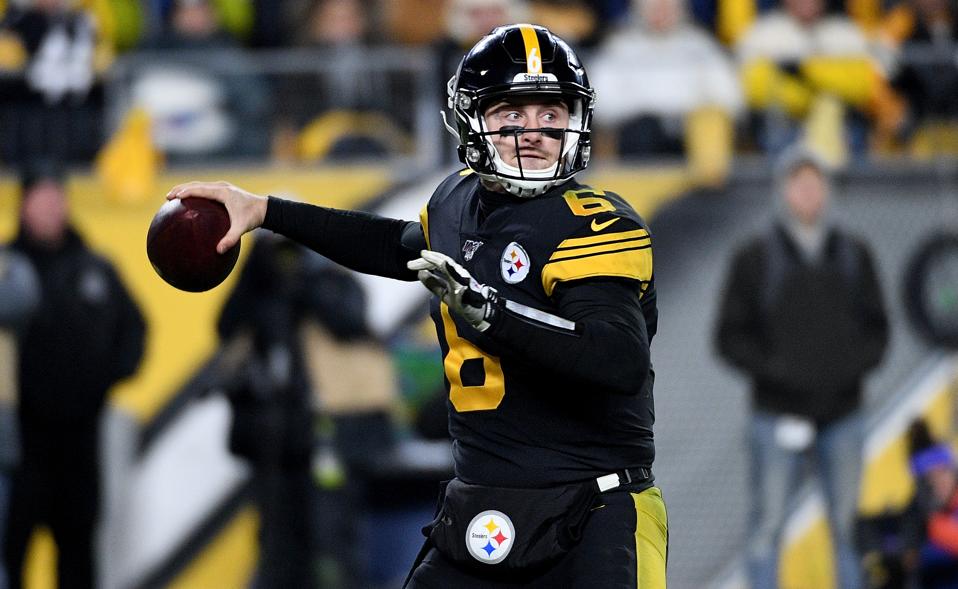 PITTSBURGH, PA – DECEMBER 15: Devlin Hodges #6 of the Pittsburgh Steelers drops back to pass in the … [+] fourth quarter during the game against the Buffalo Bills at Heinz Field on December 15, 2019 in Pittsburgh, Pennsylvania. (Photo by Justin Berl/Getty Images)

The Steelers are sticking with Devlin Hodges as they look to hold onto their place in the AFC playoff race.

Mike Tomlin announced that Hodges will be Pittsburgh’s starting quarterback for Week 16 after the undrafted rookie known as Duck threw four interceptions last weekend in a 17-10 loss to the Bills. After a few cult-hero-type performances to begin his career, Hodges crashed down to earth, finishing the game with a 43.9 rating while completing 23 of 38 passes for 202 yards. He did record one touchdown pass.

Tomlin is going with Hodges over Mason Rudolph, who took over for Ben Roethlisberger when the longtime starter was lost to injury early this season. Rudolph was benched for Hodges in Week 16; the latter led Pittsburgh to a 16-10 win over Cincinnati that week.

Prior to that, Rudolph had a four-interception game of his own. He, too, was given a chance to rebound, but he failed to against Cleveland.

“All of these guys are here playing at this level because of their ability to respond to and overcome adversity at every level of football that they have ever played,” Tomlin said of his decision to tab Hodges. “It’s very reasonable in our business, working with the type of competitors that we work with, that you give them an opportunity to respond to adversity, and answer the bell and deliver for their football team.”

Luckily for Hodges, he’ll get a chance to respond to adversity against a lackluster and injury-plagued Jets team. New York’s secondary is especially banged up and the team is in the bottom half of the league when it comes to passing yards allowed. Hodges, who was sacked four times against Buffalo, is also facing a defense that has brought opposing quarterbacks down just 30 times this season.

That’s all good news for the Steelers, too, as they’re looking to maintain control of the AFC’s final wild card spot despite a revolving door campaign at quarterback. They enter their second to last contest of the season with an 8-6 record, an impressive feat all its own considering Roethlisberger hasn’t suited up since Week 2 after undergoing right elbow surgery.

Now, however, is not the time for moral victories in the Steel City. With few other options to turn to, Pittsburgh needs Hodges to bounce back from a nightmare performance. Tomlin could always keep the rookie on a short leash like he did with Rudolph prior to his benching, but the head coach doesn’t want to think about that just yet.

“I don’t anticipate or plan for failure,” Tomlin said. “So I anticipate [Hodges] doing great. I anticipate him responding to the challenge. I anticipate him doing a great job of moving our offense and taking care of the ball. I hadn’t pondered the possibilities of that, and I won’t. I’ll cross that bridge if and when I come to it.”

With Merger And Possible IPO, Peet’s Coffee May Finally Become A Real Challenger Against Starbucks

$100B In Mormon Till Does Not Merit IRS Attention

Just How Bad Is It? Here’s The Economic...