Breaking
‘Remnant: From The Ashes’ Is Cheaper Than Ever...
Making America’s Trumps Pay Their Fair Share
Fortnite Season 4, Week 9 Challenges Revealed And...
Yesterday You Were Just A Business; Today You...
Should Your Company Help Get Out The Vote?...
Hyperautomation And What It Means For Your Business
Parker-Hannifin Crosses Pre-Covid Peak But Investors Set To...
6 Reasons Your Cold Messaging Efforts Fail And...
4 Analytics Categories To Track To Improve Your...
Predictions 2021: Cloud Computing Powers Pandemic Recovery
This Is Why You Need A Strategy In...
Economic Research Exposes Significant Flaws In DOL H-1B...
How Breast Cancer Turned This Entrepreneur Into A...
Bitcoin Price: What Next After Fresh Surge Toward...
Societal Platform Thinking
Trump And Biden Will Debate Suburbs’ Future To...
Home Business With Vans, Tony Hawk Looks Back While Moving Forward
Business

With Vans, Tony Hawk Looks Back While Moving Forward 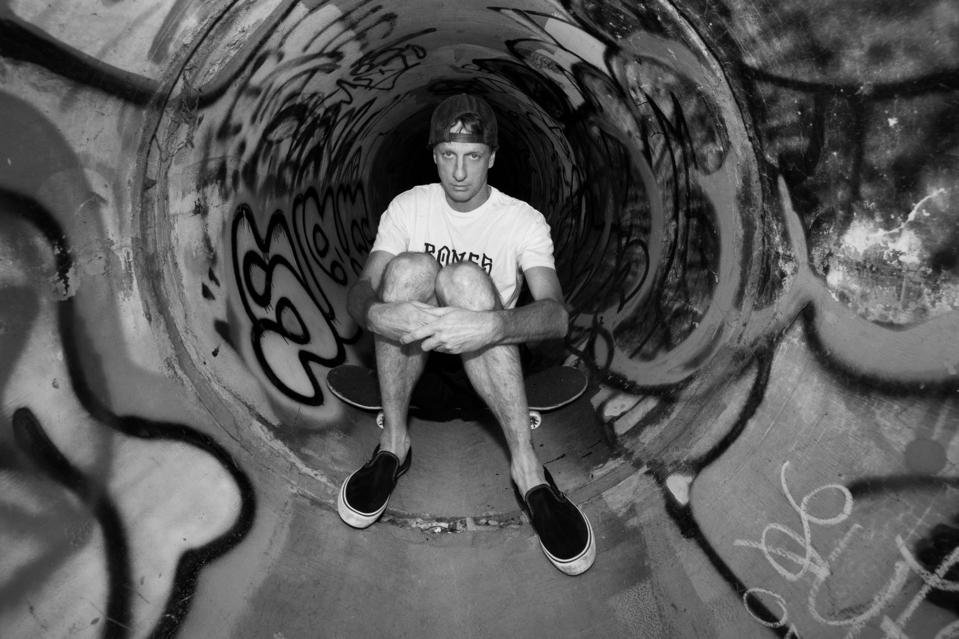 Tony Hawk back at Sanoland ditch in 2020 in Cardiff, San Diego, California, once again in his Vans … [+] slip-ons.

There’s an iconic photo of Tony Hawk in 1983, sitting on his skateboard inside a drainage pipe. The pipe is located within a network of ditches and irrigation canals in Cardiff, near San Diego—nicknamed “Sanoland” for the sanitation plant at San Elijo Lagoon. In the photo, taken when Hawk was in his early teens, his long legs anticipate his eventual 6’3” frame. On his feet, he wears Vans Classic Slip-Ons.

The shoes were developed in 1977, and Hawk “incessantly bugged” Dad, Frank Hawk, for them, finally wearing him down in 1978. This was just before Vans released the Sk8-Hi shoe, so Hawk convinced his dad to buy the separate ankle guard accessory, as well. 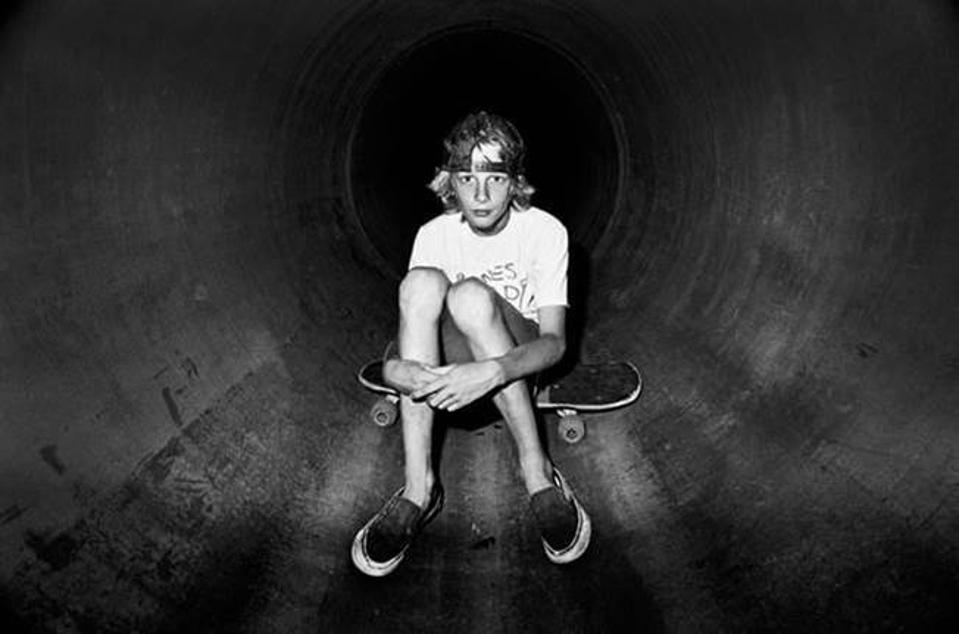 “That picture is literally taken in a pipe right next to this ditch that is not meant for skating,” Hawk says. “We went and swept it out and made it our own little skatepark for a moment.”

“It shows the attitude and creed of skating—just make it your own, do it yourself, figure it out.”

Now, of course, Sanoland is a known commodity among skaters, one of Southern California’s most storied skate spots. It’s immortalized in photos taken by J. Grant Brittain, the same photographer who captured the 1983 photo of Hawk. In the process of shooting his friends skating in the ’80s, Brittain was capturing some of skateboarding’s most classic shots, including many of the Bones Brigade (Hawk, Mike McGill, Tommy Guerrero, Steve Caballero, Lance Mountain and more). In the young Hawk photo, you can just make out the words BONES BRIGADE across his T-shirt.

Some 37 years later, Hawk, again in Classic Slip-Ons and a Bones Wheels shirt, crawled back into the pipe and recreated the photo with Brittain.

“I literally hopped a fence, got in that ditch, skated it and went in that pipe,” Hawk says. “The attitude is exactly the same. I’ve come so far between those two [photos], but the sense of values is exactly the same: do it yourself and bend the rules.”

Far from the 11-year-old kid begging his dad for Vans, at 51, Hawk is the brand’s newest ambassador. His ankles will sport Sk8-His for the rest of his life, if he wants. It’s a natural partnership: the most preeminent skater and the most preeminent skate brand in the world. It’s so obvious, in fact, some may not have realized the two weren’t already official.

In the past, explains Vans head of action sports Bobby Gascon, the “timing just wasn’t right for multiple reasons.” Maybe it was Vans’ budget at a given time, or its commitment to being respectful of the athletes already in its program. Gascon compares it to the Los Angeles Lakers bringing in LeBron James. When you sign someone more embedded in the major sports culture to your existing roster, someone else inevitably bumps down.

“We’ve been really respectful in the way we’ve built programs—family-first,” Gascon says. “Anyone we onboarded, it was as organic as possible. Last year with the opportunity we had to bring [Hawk] on as a broadcast announcer for Park Series, we spent more than half the year on the road working together. The relationship was organic, so we figured, might as well make him a Vans family member and take this partnership to the next level.”

Hawk, who has sported Vans throughout the years, was most recently on the Lakai team (alongside 27-year-old son, Riley). He has also partnered with Adio and, of course, his own Birdhouse brand.

But Hawk’s team-up with Vans is about much more than producing a signature shoe; that’s not even on the drawing board at the moment. In a far-ranging role, Hawk will work with Vans to continue to grow skateboarding in an authentic way, stressing equal access to the sport regardless of gender, socioeconomic status or other barries. He’ll also continue in his role as the live broadcast color commentator with the Vans Park Series. 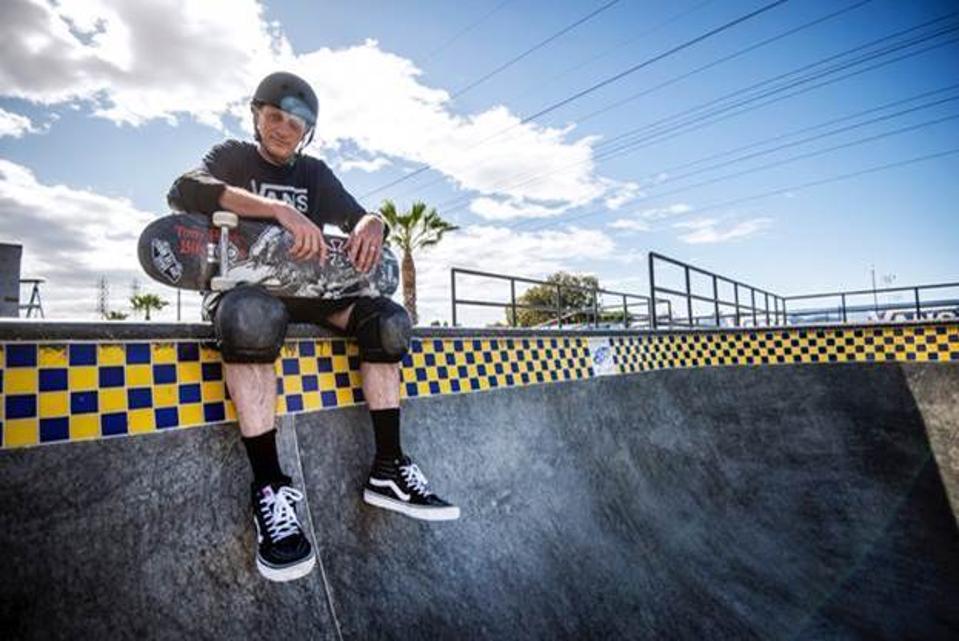 Tony Hawk, who announced an extensive partnership with Vans to continue to grow skateboarding and … [+] develop a new vert series, at Vans Off The Wall Skatepark, Huntington Beach, CA

Hawk and Vans are similarly unique; they’re household names within and outside skateboarding—highly relevant to the culture even for those who couldn’t tell a Kickflip McTwist from a McFlurry. The global skateboard market was valued at $1.9 billion in 2018, according to Grand View Research.

But it’s not a given that each new generation will be drawn to pick up a board; according to the Transworld Business and the International Association of Skateboard Companies annual report, State of Skate, Gen Z isn’t loyal to a particular sport or brand and isn’t producing a lot of “core skaters,” those who skate 26 times or more per year. Perhaps the first generation to think earnestness is cool, Gen Z values sincerity—and, according to a Cone Communications CSR study, 94 percent of Gen Z believe companies should help address social and environmental issues.

“We have a responsibility to push the culture forward,” says Gascon. “It’s progressive in itself. We take this very seriously, and it all starts with listening to the skateboarders on what they want. It’s imperative men and women are both factored in.”

Vans was one of the first contest organizing entities in skateboarding to offer equal prize purses regardless of gender orientation; the Vans Park Series awards a total series purse of more than $700,000 and has prize parity for men and women. That was crucial to Hawk’s decision to team up with Vans. Hawk has helped some of the best young female skaters of today, from Vans pro Lizzie Armanto to Team Great Britain’s Sky Brown, develop their park skills as they train for the Olympics—with some vert skating at his warehouse to keep them on their toes.

Vans Park Series also resonates with Hawk for its “sense of anarchy;” there are “guidelines, but not really rules” for the competition, which features a free-for-all best trick event at the end. That’s “the ethos of skating,” says Hawk, and it’s a testament to shared values. “As things have evolved, it’s gotten much more structured. A lot more organizations jump through the hoops of how to sanction a qualifying event for the Olympics.”

And even as street and park skating grow more mainstream, slated for inclusion in the postponed 2021 Tokyo Olympics, the Birdman is resuscitating vert skating. Hawk is producing a new vert skating competition that will run alongside Vans Park Series events.

“I appreciate that park skating is more accessible to everyone, but there is this element of vert that continues to evolve, continues to push limits,” Hawk says. “There are new tricks happening on vert all the time you will never see in park terrain or in the Olympics.”

The Olympics have been a major factor in female skaters’ rapid development around the world, but Hawk would like to see the same happen with vert. “There’s a smaller population of female vert skaters, but I sense that if we can put more events like this on more of them will be willing to take it seriously,” he says.

His own competition days may be behind him, but Hawk is as active as ever filming video parts at his warehouse ramp in Vista, California—home to most of today’s top vert skaters like Elliot Sloan, Mitchie Brusco, Clay Kreiner, Alex Perelson (and, in nearby Cardiff, Jimmy Wilkins and Tom Schaar).

Not content to rest on his laurels, Hawk’s even stomping new tricks while imploring his kids to film “just one last try:”

“I don’t think I would feel comfortable promoting skating unless I was actively skating myself,” Hawk says. His four-plus decades of experience have bestowed an “innate,” “intuitive” ability to sniff out anything contrived.

“I understand the core values of skating,” Hawk continued. When he takes on a new partnership, he asks himself questions like, Does this represent skating well? Would this resonate with skaters? “There’s so much trial and error of doing endorsements and doing collaborations and realizing how important it is to keep the integrity and authenticity as the number one priority.”

The parks are open to the public year-round and maintained by Vans to promote equal-opportunity access to skating around the world. It all dovetails with Hawk’s own skatepark development efforts through the Tony Hawk Foundation, which has has given away $10 million to more than 600 skatepark projects throughout the United States.

“With the Tony Hawk Foundation, we can leverage together; it doesn’t just become a Vans-led initiative,” says Gascon. “We can bring communities together and support them with skateparks when needed. Moving forward, what we do at the community level is going to be critical for the industry.”

Despite the massive heights he’s reached in his skating career, Hawk will never outgrow the Southern California skate haven that made him. His first-ever skate shop sponsor in 1984 was Witt Rowlett’s Carlsbad Pipelines. Like all skate shops in states under shelter-in-place orders, however, Carlsbad Pipelines is struggling to weather the coronavirus storm. So Hawk nominated his childhood skate shop for Vans’ Foot the Bill program, in which net proceeds from the sale of specially designed Vans Customs go directly to the small businesses.

“It’s an independently owned surf and skate shop that’s obviously hugely challenged right now. They don’t rely on mail orders,” Hawk says. For his first sponsor, it was time, as he put it, to return the favor.

That Hawk would come onboard with Vans at this particular moment in time—the same month verticalist and longtime host of Vans’ Loveletters to Skateboarding series, Jeff Grosso, died at 51—imbues his new role with even more meaning.

“Tony posted a text message between him and Jeff that happened not so long ago and Jeff said welcome back to the Vans family, you more than anyone should have been there all along,” says Gascon. “Vert skateboarding deserves to be elevated and deserves a place at the top of the mountain. Talking about a vert event with Tony, we’re not only putting something together with Tony’s vision, but giving homage to Jeff Grosso, too.”

There aren’t many skateboarders who could hand Hawk—Tony Hawk—the baton. That it would be Grosso, and that it would be with Vans, is as perfectly predestined as Hawk’s two very differently sized pairs of Slip-Ons in the photos taken 37 years apart in the Sanoland pipe.