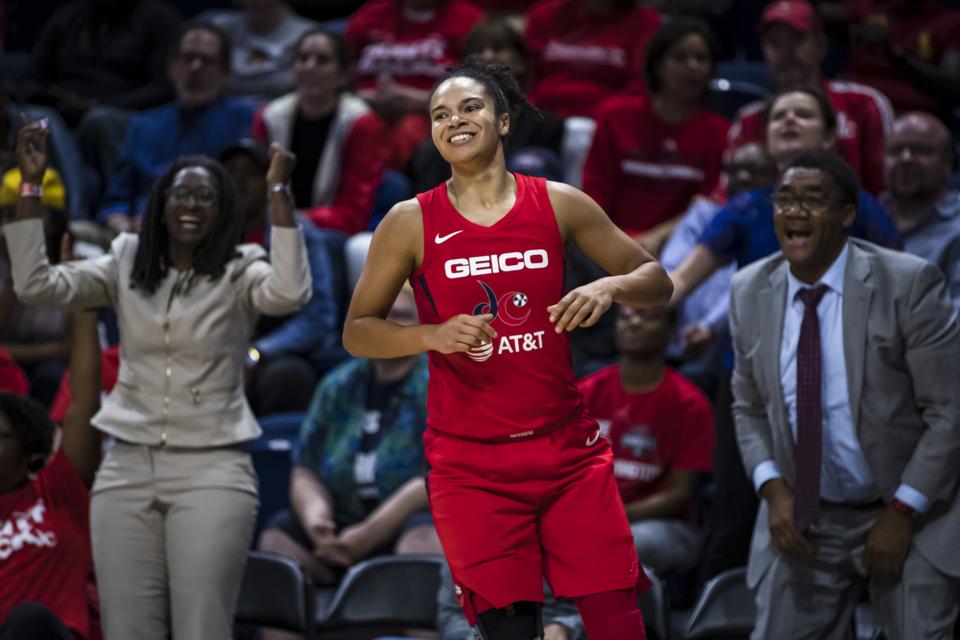 WASHINGTON, DC – SEPTEMBER 19: Kristi Toliver #20 of the Washington Mystics celebrates against the … [+] Las Vegas Aces during the second half of Game Two of the 2019 WNBA playoffs at St Elizabeths East Entertainment & Sports Arena on September 19, 2019 in Washington, DC. NOTE TO USER: User expressly acknowledges and agrees that, by downloading and or using this photograph, User is consenting to the terms and conditions of the Getty Images License Agreement. (Photo by Scott Taetsch/Getty Images)

As WNBA contenders begin to deal with the ramifications of the league’s new Collective Bargaining Agreement there was always a chance this offseason would see more star movement than in years past, and indeed a big domino fell Monday as Kristi Toliver signed with the Los Angeles Sparks. The move will see Toliver return to the organization she helped bring a title to in 2016.

It also helps return the Sparks to title contention in the WNBA following a disappointing sweep in the semifinals and the firing of general manager Penny Toler. A veteran leader and savvy play-maker, Toliver will give Los Angeles all-around play they didn’t have in Tierra Ruffin-Pratt and Riquna Williams last year.

Toliver averaged 14.2 points and 5.2 assists per game in last year’s playoffs, consistently taking pressure off interior scorers Emma Meesseman and Elena Delle Donne during Washington’s title run. In addition, Toliver’s three-point shooting (39 percent in the 2019 playoffs) and deep range make her an elite floor-spacer, a huge need for the Sparks, who will still have to juggle minutes for three All-Stars in the frontcourt.

After trading for Chiney Ogwumike last offseason, the Sparks never found a rhythm between her, sister Nneka, and the legendary Candace Parker. Now, with Toliver and All-Star guard Chelsea Gray spacing the floor and creating for the bigs, the Sparks’ offense should become one of the WNBA’s best.

Los Angeles also traded 2019 first-round pick Kalani Brown in a corresponding move Monday, which will allow Parker, the Ogwumike sisters and stretch forward Maria Vadeeva to take up the lion’s share of the frontcourt minutes. That trade brought back veteran wing Brittany Sykes, who will become the fill-in for Ruffin-Pratt and retired WNBA All-Defense mainstay Alana Beard.

The Sparks’ plan is materializing: Build an offense that can run through Parker and Nneka Ogwumike, with a bunch of wings who can shoot and defend around them. That’s the recipe that won Los Angeles the 2016 championship, but they got away from it last year. While it’s ironic that bringing back an actual piece of the 2016 would be the move to return Los Angeles to its proper order, the Sparks’ front office made it happen.

To do so, they had to act quickly and take advantage of the salary crunch facing the reigning champion Mystics. With about $634,000 already committed for 2020 and maximum contracts expected for Delle Donne and 2019 Finals MVP Meesseman, the Mystics were never going to be able to keep everyone. Based on the growth of young guards Aerial Powers and Natasha Cloud, Washington will go into next season a little thinner but stylistically intact.

Though Washington will miss Toliver’s shot creation, Toliver (whose role as an assistant coach for the NBA’s Wizards now means some longer flights between homes) returns to a roster that needs her badly and finds a team more capable to pay her properly.

The move is not yet official, and terms of the contract were not outlined by High Post Hoops in the initial news report. Toliver is eligible to earn up to $185,000 (in base cash compensation) per year on a deal now that she has left Washington. Were she to sign that maximum contract, the Sparks would still have about $400,000 left to give Gray a new contract and add depth.

After ‘The Irishman’ Oscar Debacle,Where Does Netflix Go From Here With Academy Voters?

Delta’s Ed Bastian May Just Have Become The...