Breaking
Why You Should Stop Using Your Facebook Messenger...
IRS Collections Appears To Be Broken
Google Search Rival DuckDuckGo Exceeds 100 Million Daily...
Intel: Poised For A Comeback?
Ignore These 4 Funds And You’ll Miss An...
5 Reasons Customer Service Employees Become Negative And...
Call Of Duty’s Dominance In The Gaming Industry...
How This Teen Yoga Instructor Became An Entrepreneur,...
7 Ways Pain-Free Ways Save $360 Per Month
Jeff Bezos Once Again The World’s Richest Person...
As The Bitcoin Price Whipsaws, These Radical New...
HHS Secretary Alex Azar Submits ‘Resignation Letter,’ Effective...
Tapping Into Health To Excel In Business
Weekend Favs January 16
Over 11,000 Ice Cream Cartons Recalled Due To...
My Top Ten Concerns About The 2021 Tax...
Home Technology Worried About Coronavirus? Now You Can Text Message A Chatbot With Questions
Technology 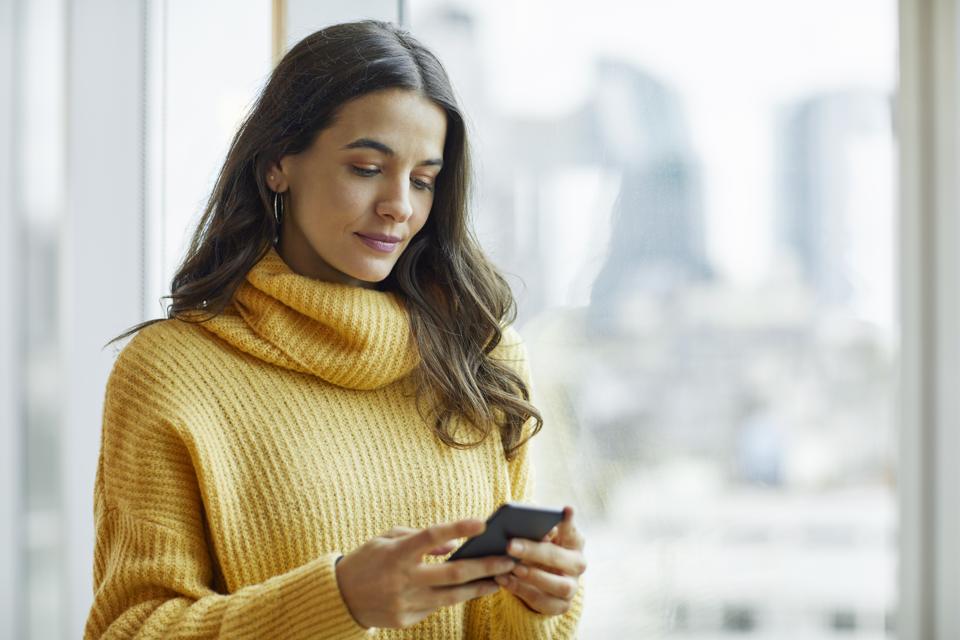 First, wash your hands. Then, pick up the phone.

Two telemedicine startups on Thursday unveiled a partnership that allows worried patients to text their concerns about the novel coronavirus, or COVID-19, to a chatbot that can link them to remote doctors. The goal is to help them avoid waiting in crowded clinics that may increase the risk of infection for them and for healthcare providers.

San Francisco-based Memora Health and New York-based Roman are offering the new service that uses an artificial-intelligence powered chatbot to answer basic questions about COVID-19, and then connects at-risk patients to a doctor. Patients can text, “What are the symptoms?” and “should I wear a mask?” and the bot, using automated software programmed with recommendations from the Centers for Disease Control and Prevention (CDC) and the World Health Organization (WHO), texts back answers. 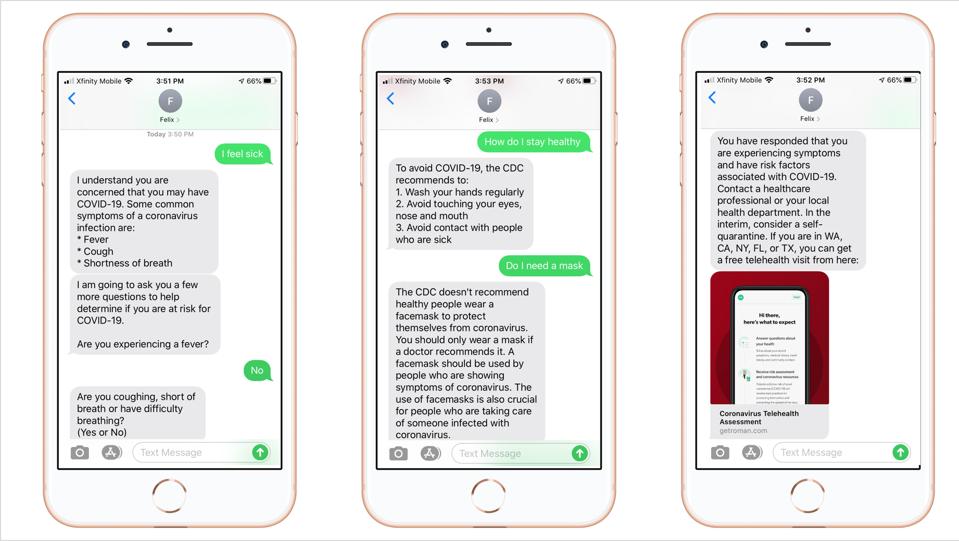 If someone reports that she has a fever or cough or has traveled to an area experiencing an outbreak, she’s connected with Roman’s telehealth services to speak with a licensed doctor via phone or video. Then, if the doctor determines the patient is at high risk for having COVID-19, Roman (also known as Ro) says it will collaborate with the patient’s state health department to get treatment at a local hospital. The texting portion of the program is a little clunky, but the whole program, from initial text to doctor’s consultation, is free of charge. Doctors that have contracts with Ro are volunteering their time to consult with worried patients.

The new partnership is “a public health tool accessible to anyone who has text messaging on their phone,” says Manav Sevak, Memora’s CEO. 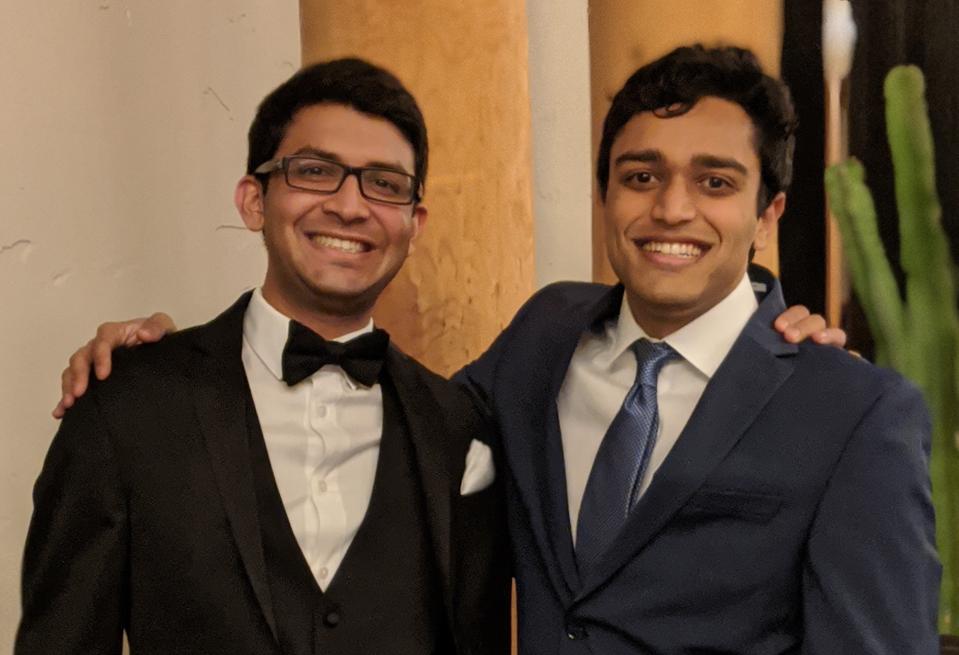 Memora Health, founded in 2016, provides patient texting services to healthcare systems. “The majority of Americans have access to a cell phone,” Sevak says, “and texting is a lower barrier to entry for many folks” than visiting a doctor or even video-based telemedicine. The COVID-19 chatbot is being offered through several healthcare systems, Sevak says, but even people who are uninsured can directly dial in the number.

Ro, founded in 2017, is best known for its direct-to-consumer erectile dysfunction medication that can be prescribed after a telemedicine visit with a doctor on the Ro platform. Its sister site Rory, aimed at women, sells eyelash enhancing drops and treatments for genital herpes. Zachariah Reitano, Ro CEO and Forbes 30 Under 30 alum, says that he saw a need in the fast-moving COVID-19 outbreak that his company’s technology could fill. “Our platform is best in the world at triaging in real-time based on specific information that the patient enters,” he says. It also already has a stable of doctors around the country, licensed to practice telemedicine in all 50 states. 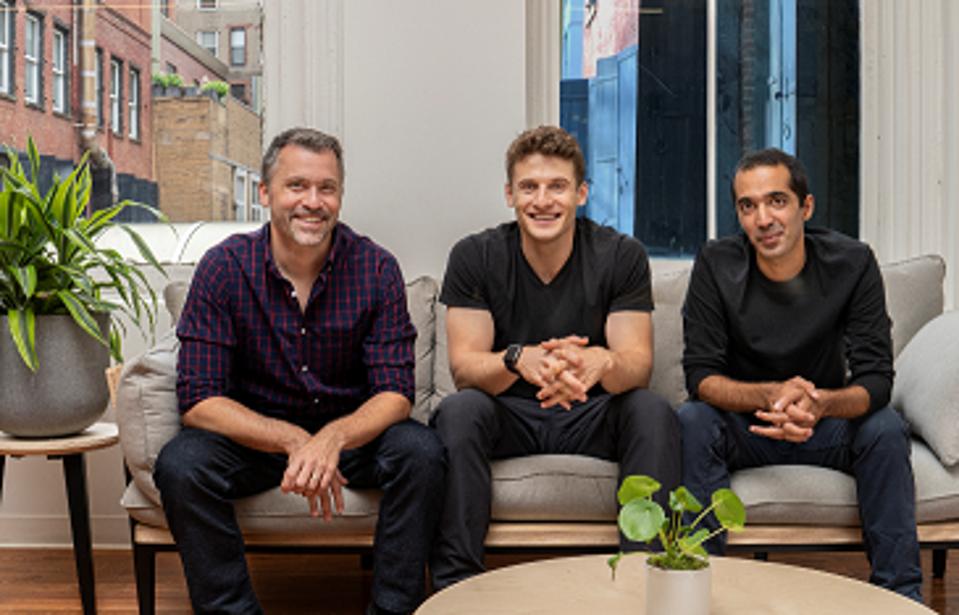 Ro is currently offering the service to 40% of the country, focusing on states like Washington, California and New York where there have been significant outbreaks. By next week, its COVID-19 telehealth program will be available nationwide, Reitano says. (Disclosure: Forbes has a small, passive investment in Ro.)

Telemedicine is crucial in an infectious disease outbreak, says Ray Dorsey, the director of the Center for Health + Technology at the University of Rochester Medical Center. It allows patients to stay out of clinical settings where they could be exposed to the disease, and it also protects healthcare workers, some of the most vulnerable people in outbreaks.

It is not without challenges. For one, telemedicine usually relies on the idea that everyone has access to the internet, which isn’t true. It also requires doctors to be licensed in the states that they practice, a hurdle that Ro has already passed. Another issue: telemedicine isn’t covered by all forms of insurance, including, until recently, Medicare. On March 6th, President Trump signed an $8.3 billion coronavirus response bill that included more relaxed reimbursement protocols for Medicare patients using telemedicine.

At the University of Rochester, Dorsey uses telemedicine to treat patients with Parkinson’s disease. He says that using it for the coronavirus outbreak may normalize its use in the future for other ailments. “The fundamental aim of telemedicine is to provide care to anyone, anywhere that needs it,” Dorsey says, “Hopefully we’ll take lessons from this.”

Coronavirus In Europe: Is It Safe To Visit?