Yesterday, China launched a mobile app to let you know if you have had “close contact” with the coronavirus. According to CNET, citing Xinhua, China’s state-run news agency, users can scan a QR code with mobile apps, such as, Alipay or WeChat to find out if they are at risk based on their proximity to someone who has been infected or is suspected of infection. (See privacy comment/update at end of post.) 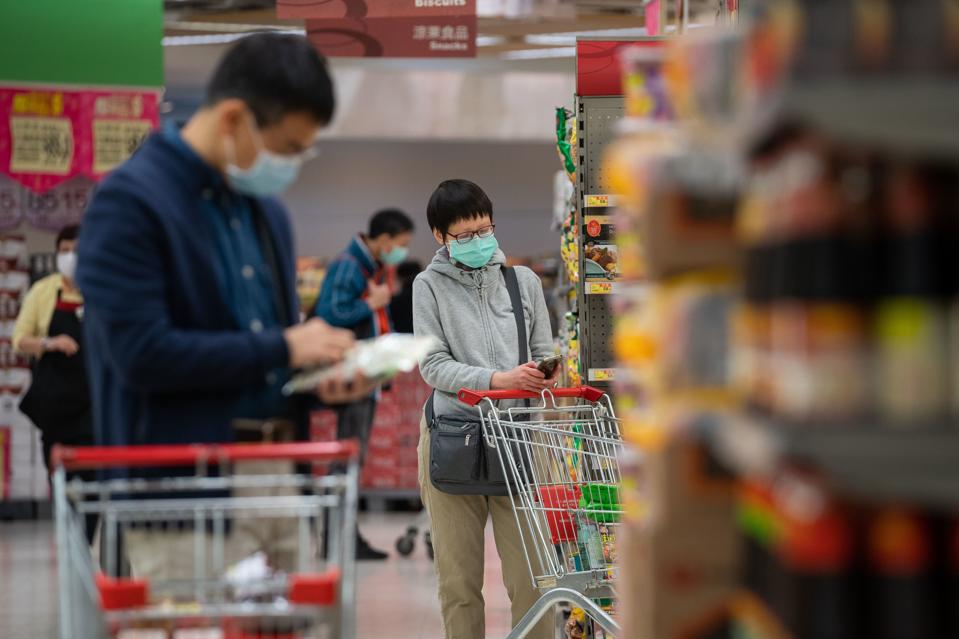 HONG KONG, CHINA – 2020/02/12: Shoppers wearing surgical masks while shopping in a supermarket. … [+] Panic grows in Hong Kong as the city has confirmed the 50th case of Novel coronavirus (2019-nCoV). Over 40,000 cases of the virus has confirmed around the world, it has so far claimed over 1000 lives. (Photo by Geovien So/SOPA Images/LightRocket via Getty Images)

The coronavirus app listed above is for those in China, and at greatest risk currently. But it begs the question of – is this sort of app or device coming to a mobile device in your country? This app news hit my radar thanks to SmartBrief, which presented a poll to subscribers of the “While You Were Working” newsletter, with the following question:

“Imagine the government didn’t already have access to a bunch of your mobile phone location data and you were given the chance to download an app that would cross-check your location data history to see if you had been in close proximity to someone who had been diagnosed with coronavirus. Would you download the app?” 70 percent said “No.” I am guessing that a majority of that survey audience is not based in China.

There is also a real-time data-driven site, the Coronavirus.app site that shows 44,000-plus confirmed infection cases in China. The next country on the list is Japan with 203 confirmed cases and it declines from there — with the rest of the world showing less than one percent of the total, to date. That could change rapidly, of course, but the site provides an additional view of just how far and wide the virus is in reality, providing calm in the midst of chaos.

Data can sometimes be frightening, so to keep things in perspective and rational, I want to share this one (title notwithstanding): AI Predicts Coronavirus Could Infect 2.5 Billion And Kill 53 Million. Doctors Say That’s Not Credible, And Here’s Why – Forbes contributor, John Koetsier, explains why you should keep your wits and not freak out about coronavirus. Artificial intelligence, in this case, does not have all the data and facts and is likely wrong. Phew. This post lists several more data points and tips to protect yourself just below.

In July 2019, researchers from the University of Tokyo developed a smartphone virus scanner that leverages the power of a phone’s camera alongside a low-cost battery-powered device.

According to the MobiHealthNews website, “Yoshihiro Minagawa, a researcher from the University of Tokyo… has invented a portable, low-cost, battery-powered device that pairs with a smartphone, which was tested with viruses but could also detect other biological markers. His initial findings, together with other teammates, were published recently in the journal, Lab on a Chip.”

You can read about Minagawa’s work with full details on the team’s smartphone-based imaging unit work using the Autodesk 123D Design tool and a FormLabs resin 3D printer for prototyping the device case. While this device is still in the works, as with many university researchers with a maker mindset (build-it-yourself personalities leveraging 3D printing), there is simply so much potential for smartphones to continue shaking up our world in positive ways.

As our world grows increasingly interconnected, would you consider using an app that might alert you to biological risks, such as, the coronavirus (which is believed to be related to the SARS and MERS viruses). Based on Minagawa’s work, and China’s efforts to protect its citizens and prevent further spread, it appears that tech work is solidly underway despite difficult health conditions.

There are a number of other educational resources on the coronavirus on Forbes in the last few weeks that I want to call out as well.

Update: Based on discussions with my editors and some further review, I can see where privacy issues will be raised on this topic. Here is an ABC News post that delves into it a bit. HIPAA laws in the U.S. would likely impact large scale collection efforts of this type, but perhaps a self-reported, crowd-sourced solution that removes personal data would work in any future app that was created and used in the USA for such purposes.

Good News For The Cleveland Browns: Myles Garrett Has Been Reinstated By The NFL