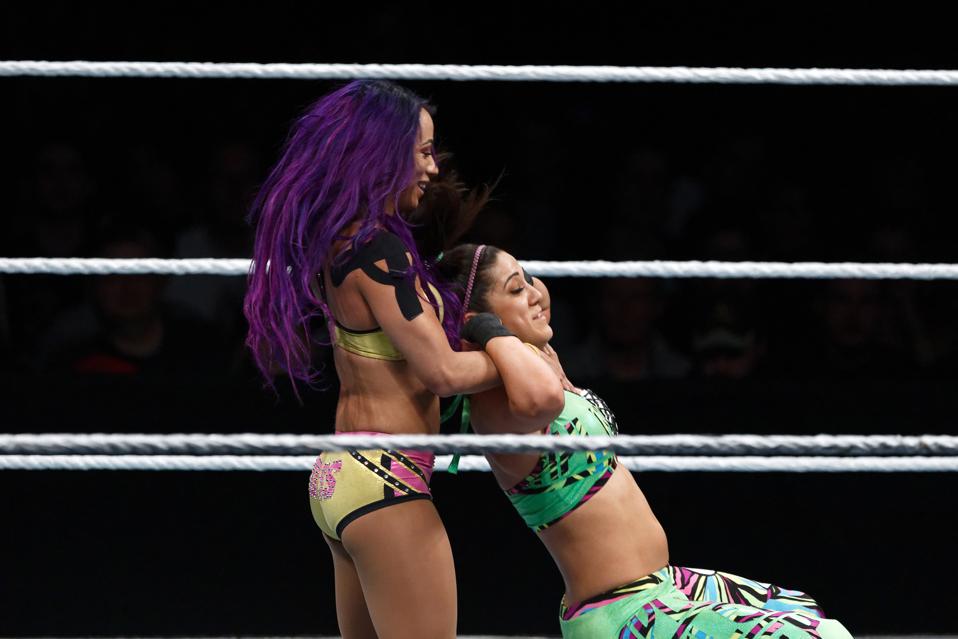 WWE reportedly will be holding off on a huge match that had been planned for SummerSlam. (Credit: … [+] Sylvain Lefevre/Getty Images)

WWE could be delaying a blockbuster SummerSlam bout as a result of the Covid-19 pandemic.

According to a report from WrestleTalk, WWE may hold off on doing the highly anticipated Sasha Banks vs. Bayley match at SummerSlam:

“WWE has been planning on having Banks and Bayley go one-on-one at SummerSlam in August 2020. WrestleTalk has learned that WWE wants to extend the feud, and sees more potential in drawing it out as opposed to rushing it. We’ve also been told that part of the reason for delaying Banks and Bayley’s match is because of the location that SummerSlam was set to take place. Before Coronavirus, SummerSlam was slated for Boston, where Banks grew up and began wrestling. WWE thought that having Banks vs. Bayley in Boston would have generated the best reaction for Sasha, who would have been the face in the match,” the site writes.

In addition, it’s noted that “the match isn’t completely off the table right now, the company is considering other options for the SmackDown Women’s Championship at the show.” The Wrestling Observer’s Dave Meltzer (h/t Cageside Seats) reported back in March that WWE had originally penciled in Bayley vs. Banks for WrestleMania 36 but “ultimately decided to hold off because they couldn’t build a feud between them fast enough.”

Well, that’s strange because it sure seems like WWE has been building up this rivalry for well over two years now.

Of course, Bayley and Banks have had an on-again-off-again friendship that has spanned throughout much of their WWE careers, and since at least 2018, they’ve been virtually inseparable on WWE programming, first on Raw and later on SmackDown. There have been countless missed opportunities for WWE to have gone all in on a split between the two, with either Banks or Bayley turning on the other star to set up a major rivalry between the two. Instead, both Bayley and Banks surprisingly turned heel last year and have been functioning in that role as a duo ever since then, even though Bayley has held the SmackDown Women’s Championship over two reigns that have now lasted more than a year combined.

While the length of Bayley’s title reign has been impressive, the reign itself hasn’t. Instead, it’s been a rather underwhelming one defined by a real lack of challengers for Bayley, as the SmackDown’s women’s division has simply been biding its time until we get the only women’s rivalry on the blue brand that is truly anticipated: Banks vs. Bayley. After WWE held off on doing that match at WrestleMania 36, it looked like SummerSlam was the obvious time and place for the match to occur given that it was originally set for Banks’ hometown of Boston.

Because McMahon is reportedly intent on hosting SummerSlam with fans but will likely be unable to do so in Boston in August due to the Covid-19 pandemic, that means that WWE is once again delaying the seemingly inevitable match between Banks and Bayley. Truth be told, WWE is going to find itself in a difficult situation with that feud, especially considering that it should have happened long ago. Without actual fans in attendance, doing Bayley vs. Banks—especially if either star turns babyface—would be somewhat of a waste given the recent state of WWE’s TV viewership. Similarly, one could argue that neither Banks nor Bayley, who are both thriving in their current roles, should be turning babyface anytime soon.

But if WWE can craft an interesting narrative for the two stars—and yes, that’s a big if—Banks would seemingly be the more likely candidate for a face turn given how popular she is and given that Bayley is the current champion while Banks has shockingly been relegated to being a bit player. At this point, however, WWE is stuck in a holding pattern in which it’s easy to tell that the company doesn’t want to “waste” its biggest and most buzzworthy storylines for this post-WrestleMania era in which ratings tend to be down anyway, and that problem has only been exacerbated by its uncertain future resulting from Covid-19.

For now, WWE would be better off delaying that Banks vs. Bayley feud, but if the company holds off on it for too long, it shouldn’t be surprised if the rivalry fails to live up to its lofty expectations.