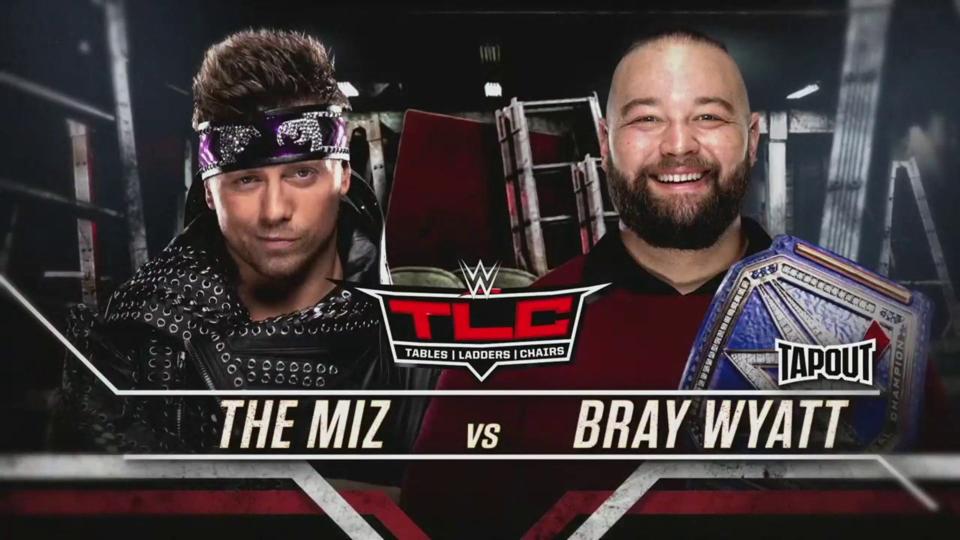 Bray Wyatt will wrestle his first match as “Bray Wyatt” since returning to television in April.

The main event saw Roman Reigns humiliated as Dolph Ziggler, Baron Corbin and Corbin’s security poured dog food all over the handcuffed Big Dog with help from a mystery man underneath the ring whose grey hair will lead some to believe it was Shane McMahon.

SmackDown’s viewership dipped to 2.325 million viewers last week on the Friday after Thanksgiving.

The Miz was informed that Daniel Bryan had disappeared and instead of filing a police report for his missing co-worker, he simply grabbed a microphone to host his show. That’s next-level commitment to WWE.

When Miz was informed Bray Wyatt could be screwing with his family, Miz looked to take the first flight back home. Just when I was beginning to question the man’s priorities…

Drake Maverick is officially being booked like Scrappy Doo.

Babyface Elias is the worst version of Elias and I don’t see that changing after this segment.

Jessika Carr made history as the first full-time female referee on Friday Night SmackDown, but unlike AEW, the announcers didn’t hit you over the head about how strong, powerful and independent she is. Surprising.

I know Alexa Bliss will eventually turn on Nikki Cross but I’ve grown fond of their chemistry.

When Mandy Rose ripped off Alexa Bliss’ eyelash, I was certain Nikki Cross was going to pick it up and wear it for herself.

Mustafa Ali and Shorty G are the SmackDown version of Ricochet and Humberto Carrillo.

At one point, Big E—while talking about Shorty G—exclaimed “he’s a former Olympian!” almost in frustration. That one line is the story of Chad Gable’s career on the main roster.

It was awkward watching Otis steal Big E’s gyrating gimmick while E was sitting just a few feet away on commentary.

Shorty G and Ali were the only team without matching outfits and they made it all the way to the final two.

If there isn’t a video package to show all the real-life reasons fans should be rooting for Lacey Evans, this company is insane.

Some fans are slowly starting to get back into the habit of booing Roman Reigns. WWE must have heard this, so they stuck him in the ring with Dolph Ziggler, who can make anybody seem likable by comparison.

Given WWE’s stronghold on the over-fifty demographic, it was strange (and encouraging) to hear “let’s go Roman!” chants coming exclusively from the children in the crowd.

King Corbin watching this match for 15 minutes, while a crew of independent wrestlers dressed as security held him up, was the cruelest rib ever.

There was a mystery man under the ring with grey hair who helped apprehend Roman Reigns and I swear it was Shane McMahon.

I might be wrong, but it seemed like Roman Reigns was fighting back laughter while having dog food poured all over his face.

How To Watch Or Stream UFC On ESPN 7: Overeem Vs. Rozenstruik