Breaking
Can You Settle Your Student Loans Or Negotiate...
How to Use Amazon Attribution For Ad Campaigns
How To Quickly Start And Scale Your Business
Terra Virtua: What NFTs Can Teach Us About...
5 Easy Steps To Prepare Content For E-A-T...
Physical Inactivity Linked To More Severe Covid-19 Infection...
The 2021 Estimated Tax Dilemma: What Tax-Return Pros...
Want To Digitally Transform Your Business? Start With...
How to Optimize Google My Business and Leverage...
Debunking Link Building Myths in 2021
How, When And Where You Can Gaze At...
SBA Opens $16.2 Billion Shuttered Venue Operators Grants...
What are the Essential Features of a Small...
Trends In Executive Recruiting That Will Help You...
The Growing Case For Banning Pesticides Linked To...
The Reopening High – But Long-Term Issues Cloud
Home Business WWE Friday Night SmackDown Results: News And Notes After Goldberg-Roman Reigns Contract Signing
Business 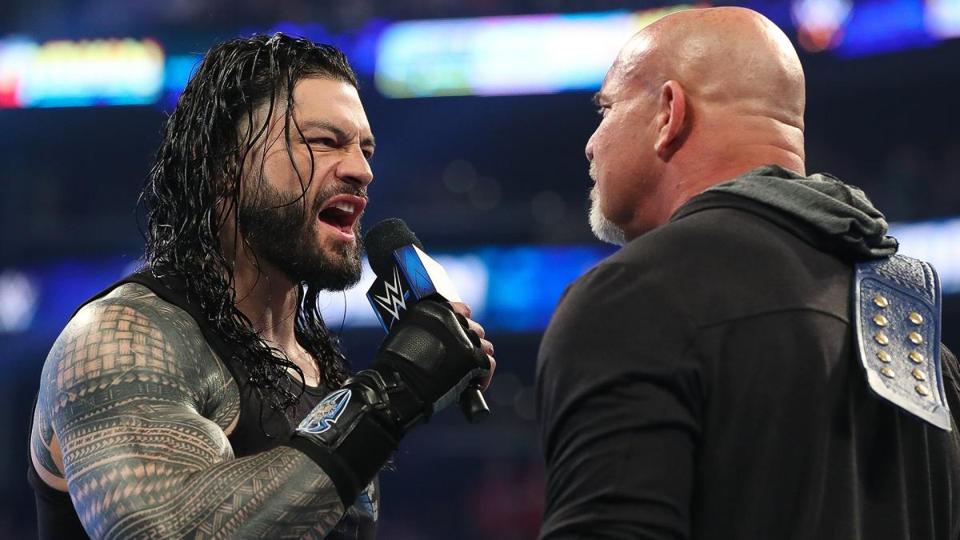 Roman Reigns and Goldberg made their WrestleMania match official with a contract signing on Friday … [+] Night SmackDown.

WWE Friday Night SmackDown aired from the WWE Performance for the second of what figures to be many weeks. This week’s empty-arena broadcast featured much more wrestling in addition to one re-air of the WrestleMania 30 clash between John Cena and Bray Wyatt.

When Gronk said he was a huge wrestling fan, I was just waiting for him to mispronounce a famous wrestler’s name. That was par for the course during the ill-fated celebrity guest host era, but Gronk fits in just fine.

Gronk hasn’t even wrestled his first match yet and Mojo Rawley may already have a Baron Corbin feud. The hype renaissance continues.

Rob Gronkowski and Mojo Rawley can be pro wrestling’s Bill and Ted.

I loved how Sami Zayn called the referee “referee.”

With Daniel Bryan intending to wrestle part time, it feels like WWE is planning on doing a bait-and-switch with Drew Gulak. Is Drew Gulak going to inherit the “Yes” chant?

While hyping a re-airing of WrestleMania 30 on broadcast television, Michael Cole teasingly asked whether or not Daniel Bryan was able to complete his journey at WrestleMania all while Bryan was celebrating with the Universal Championship.

Tamina was added to a WrestleMania championship match because Bayley facetiously asked whether or not she still works here. What a build!

From the token profanity to the plot twist of Sasha Banks being added to a Six-Pack SmackDown Women’s Championship, this segment was a fish out of water without a crowd.

The Six-Pack matchup appears to be an alternative to the women’s WrestleMania Battle Royal, which absolutely should not happen during the ongoing global pandemic.

The promo package that aired before this match showed John Cena from a recent episode of SmackDown saying WrestleMania should air without John Cena. Given the threat of the novel coronavirus, it might end up being the other way around.

Luke Harper was prominently featured throughout this match which I found hilarious.

The story of this match was the sea of people swaying back and forth while singing “he’s got the whole world in his hands.” It’s easy to forget how over Bray Wyatt was at his peak, which makes me nervous for his current iteration, especially after losing to Goldberg.

The Miz and Morrison def. Heavy Machinery by Disqualification

Prediction: When live wrestling returns, fans will be so happy to be able to go toe the show they’ll gleefully chant along with “Miz and Morrison, hey-hey! Ho-Ho!”

The Miz suggested they ask the (empty-arena) audience who they should face at WrestleMania, which is actually a better tactic than gifting a title shot to somebody simply because the champion asked whether they still worked there.

Dolph Ziggler calling Otis a “second-place loser” because he couldn’t get the girl should be a (kayfabe) warning sign to Mandy Rose that he considers her a prize.

Otis throwing a tantrum was very compelling television, but some of the intensity was lost when he comically cried in Tucker’s arms.

This is WWE’s second contract signing in a five days. Maybe they feel if the Superstars sign a contract, there’s nothing a global pandemic can do to stop this event from happening.

Roman Reigns sent a tweet criticizing Goldberg in January and I guess it technically counts as long-term storytelling.

Goldberg defending head-butting a door was part of the build to this world championship dream match.

In addition to their spears, nobody does intensity like Goldberg and Roman Reigns. They haven’t said much to one another but it only heightens the novelty of seeing them in the ring together. I can’t wait to see them fight.

Mitch McConnell Wants To Give Everyone Some Cash: How Would It Work?