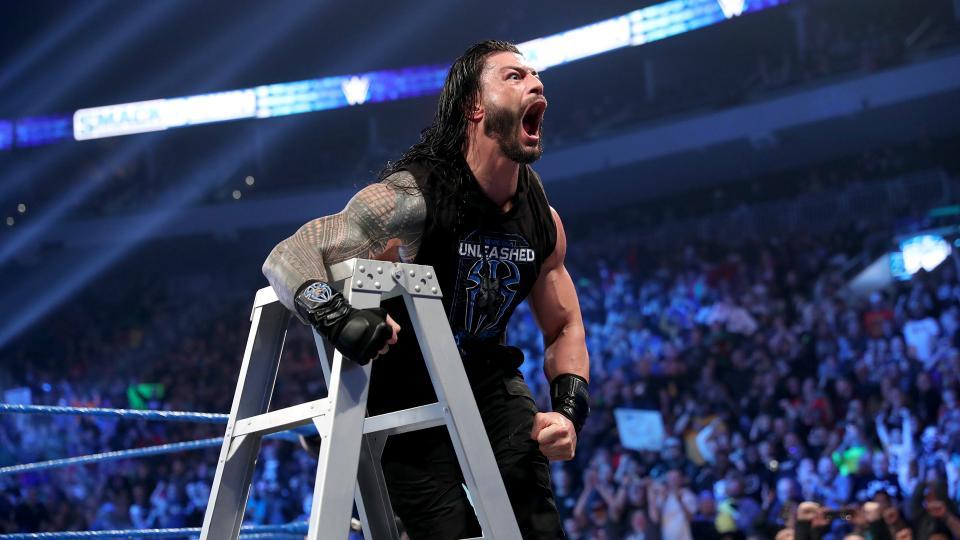 Roman Reigns gained a measure of revenge after being embarrassed by King Corbin last week.

WWE SmackDown aired an intriguing go-home show featuring a Bray Wyatt home invasion at the expense of The Miz while Roman Reigns returned with fire and fury, getting revenge from last week’s dog food humiliation by putting Dolph Ziggler through a table from atop a ladder.

SmackDown’s viewership dipped to 2.446 million viewers last week on the Friday after Thanksgiving.

It took a little convincing but Baron Corbin really did have a helluva 2019.

A great excuse for Bobby Roode’s absence could have been “Bobby’s out building me a pyramid.”

With no Bobby Roode in the picture for now, Dolph Ziggler was forced to go from henchman to hype man.

This show (and company) would be so much better if the TV time allotted to The New Day and Baron Corbin were reversed.

Whenever Superstars refer to each other as best friends, that relationship can safely be put on notice.

The camera missed whatever Nikki Cross did to Sonya Deville to secure the three count.

The women’s tag team division is quietly blossoming into a loaded entity, which is insane when you think about the punchline it was just a few short months ago.

Poor Dash Wilder very well may get the Titus O’Neil treatment where his gimmick is his lack of balance, especially with his contract reportedly coming due.

The longer Shorty G and Mustafa Ali team together, the more nervous Ali should get about possibly having to wear matching gear with Shorty G.

Fans at the superior Fiserv Forum showed tremendous restraint by not chanting “Batista” during a Dana Brooke match.

Dana Brooke changed her gear so she could look more like a 2009-era Diva.

She’ll never be what WWE thought she was going to be coming out of NXT, but boy Dana Brooke seems to have improved by leaps and bounds in the few chances she has had in 2019.

The Miz’s shuffleboard table was one of the least-intimidating things I’ve ever seen in a pro wrestler’s home.

Renee Young should have asked The Miz if he feels insulted that a terminally nonviolent Bray Wyatt felt he was tough enough to take on The Miz. Like, was Miz not good enough for The Fiend?

The Miz, one of the most natural heels this business has ever seen, came off as such a major babyface in this segment.

It took way too long for Miz and Maryse to check on Monroe after seeing she could have been in peril.

Either Monroe Sky is the greatest actor in the history of baby actors, or nobody smartened her up about that creepy-looking doll that was placed in her room.

Cesaro’s career has taken a nosedive ever sine he switched to capris.

Heavy Machinery losing to two talented veterans who hit their ceiling years ago was baffling.

I got my hopes up for a possible Kofi Kingston single’s push when this match was announced as a one-on-one, but alas, it quickly morphed into a tag team match.

If somebody shoved dog food down my throat on national television, there’s no way I’m waiting until my music plays to exact my revenge.

Thankfully, Dash Wilder was not booked to slip on dog food and fall on his butt.

These people went nuts for Roman Reigns. Especially the women. The more Roman Reigns in 2020, the better.

UFC 245 Preview: A Look At The Record Breaking Stats For Kamaru Usman Vs. Colby Covington