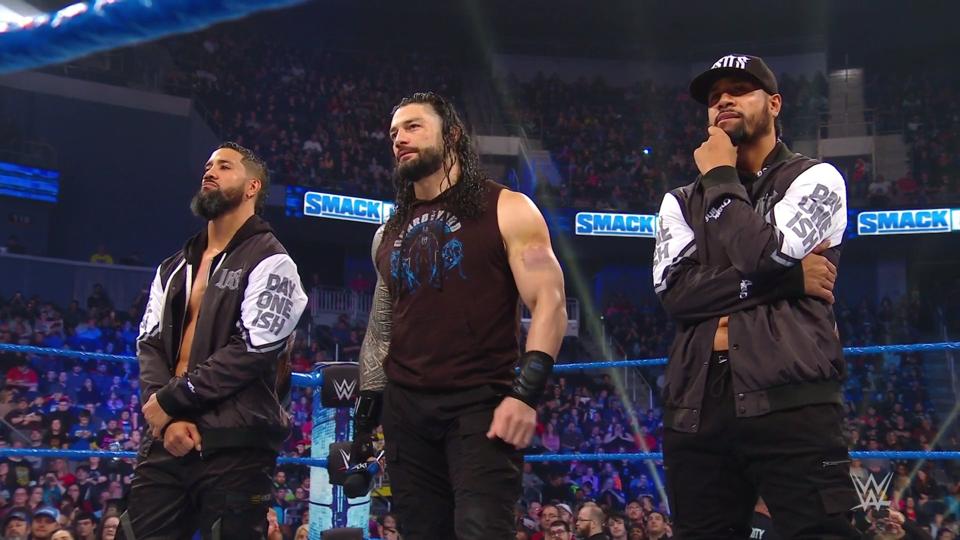 The Usos returned to battle Baron Corbin and Dolph Ziggler.

Meanwhile, the show kicked off with the first in-ring promo from John Morrison in almost a decade before Morrison assisted The Miz in a victory over Kofi Kingston.

I literally forgot that Miz and Morrison used to be a very accomplished tag team over on ECW.

Miz and Morrison in 2020 will be every bit as obnoxious as they were in 2010 and it’s going to be great. There’s a reason they have their own Wikipedia page.

The Miz as a heel forces you to focus on his elite ability to incite a crowd rather than his passable wrestling.

The Miz and a returning John Morrison feuding with The New Day will be a perfect placeholder until Xavier Woods comes back.

Bray Wyatt said “love is special, but not everybody is capable of it,” which might be the exact opposite Mr. Rodgers’ mantra.

Since The Fiend has decided he wants to hurt Daniel Bryan, will WWEShop.com be selling “hurt” gloves as opposed to the heal/hurt combo?

How hasn’t Elias been the No. 1 entrant in a Royal Rumble yet? Just so he has all the time in the world to serenade a pay-per-view crowd who would be so into it.

The best Elias songs are the ones where people get to clap along.

I’m just glad Mandy Rose didn’t carry around that box of cake for two months without telling us what was in it.

Mandy Rose has a habit of telling other blonde WWE clones “you will never look like me!” Maybe she’s a fan of irony.

If this match was any word in the English language, it would be “sloppy.”

The fact that Bayley’s promo didn’t lead to an ambush with Sasha Banks is baffling.

If Braun Strowman is on a warpath to the Intercontinental Championship, and he ousted Cesaro, aren’t they skipping the step where he beats Sami Zayn before getting a non-title match against Shinsuke Nakamura?

Michael Cole has been tripping all over his words on commentary for the entire night.

Shinsuke Nakamura, Sami Zayn and Cesaro feel like they’ll be coaching at the WWE Performance Center in 2025.

Baron Corbin and Dolph Ziggler def. The Usos by Disqualification

Roman Reigns made a veiled comment about The Shield where he called them “friends,” meaning they have been downgraded from brothers.

Roman Reigns saying he wants to main event WrestleMania for a fifth time would have been drowned out with boos if he cut that promo this time last year.

The Usos somehow managed to look even more alike with their new haircuts.

Kane has had 19 Royal Rumble appearances, but Michael Cole only being credited him with 17 since the other two were as Isaac Yankem and the Fake Diesel.

How To Avoid The Productivity Pitfalls Of First-Time...

From Competition To Sharing: How Her Children’s Rare...

Vaping-Associated Lung Injuries: Here Is The Latest On...