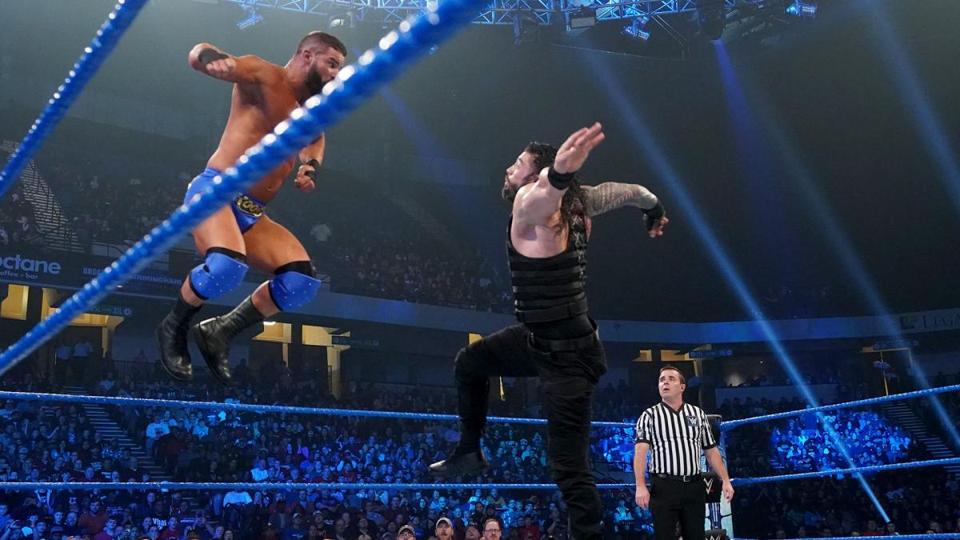 WWE Friday Night SmackDown featured the return of Kane in a strong opening segment that saw Daniel Bryan get the better of The Fiend with a fistful of Fiend’s dreadlocks.

Roman Reigns defeated Robert Roode in the main event, a Table’s Match, meaning Reigns was made to choose the stipulation for their single’s match at Royal Rumble. The stipulation? Falls Count Anywhere.

Last week’s edition of Friday Night SmackDown was up slightly with 2.497 million viewers.

This segment was on the verge of being too ridiculous to take seriously and suspend my disbelief but somehow it held on and was actually quite effective.

John Morrison may not be as spry as he was 10 years ago, but he meshed with Big E power style and picked up right where he left off.

If John Morrison finds his way into the Royal Rumble, Kofi Kingston may have stiff competition for the most athletic spot of the match.

The Usos vs. The Revival

If WWE had enough time for The Usos to beat The Revival fresh off last week’s DQ loss, it would have happened.

The more The Revival loses, the more obvious it is that they have not signed any sort of extension.

The Usos looked a tad rusty in this one, but a fine match nonetheless.

My favorite part of this match was Jimmy Uso staring directly into the hard camera midair during a splash.

Who died and gave Adam Pearce all the stroke to make this match?

Does heel Bayley own another set of gear?

Lacey Evans has gotten over as a babyface pretty significantly despite WWE pulling that trigger prematurely and with essentially no notice. Can you imagine how over she’d be if these people had a plan?

To prepare for the 2020 Royal Rumble, Elias has sang a song each week. Not sure how that’s going the help him avoid elimination, but it may be a little tougher to throw him over the top rope while carrying the guitar.

Fans were with Elias and politely clapped along to his music, but when he threatened to roast Sami Zayn, they were way into it.

There was a time where all Alexa Bliss did was win world championships. It seems like so long ago.

Sonya Deville convinced Mandy to ask Otis to appear ringside for selfish reasons. Then she lost due to an unintentional distraction from Otis. This storyline is hitting on all cylinders.

Will a main event ever start without an ambush attack?

When Michael Cole says “Uso’s Penitentiary,” he makes it sound like a vacation resort.

Falls Count Anywhere isn’t anywhere in line with the dog references that have been ubiquitous in this feud.

You Should Probably Be Watching ‘DC’s Legends Of...

Is Your Business Future Ready? Here Are Two...

Why Jenna Marbles, One Of YouTube’s First Stars,...