Breaking
Meet Onesimus, The Enslaved Man Who Saved Boston...
How to Build a Sales Forecast Model
The Unexpected Ways COVID-19 Has Forever Changed What...
Google Posts: Conversion Factor — Not Ranking Factor
How To Bring Your Branding To Life
Coinbase Cofounders And Investors Poised To Rake In...
How To Stay Top-of-Mind For Your Audience With...
Employers: Eight Red Flags You May Not Notice...
The benefits of videoing in the automotive industry
Ted Lasso, Other Apple TV+ Shows Arriving Soon...
How To Incorporate Click And Collect Into Your...
What Are Working Capital Loans and When Should...
The 10 Biggest Trends in Entrepreneurship to Look...
Clubhouse Has Grown 10X In Two Months. Here’s...
Here’s Why Tyson Foods Stock Looks Undervalued At...
How To Maintain Client Relationships During Long Projects
Home Business WWE Is Making A Huge Change To Its Pay-Per-Views
Business

WWE Is Making A Huge Change To Its Pay-Per-Views 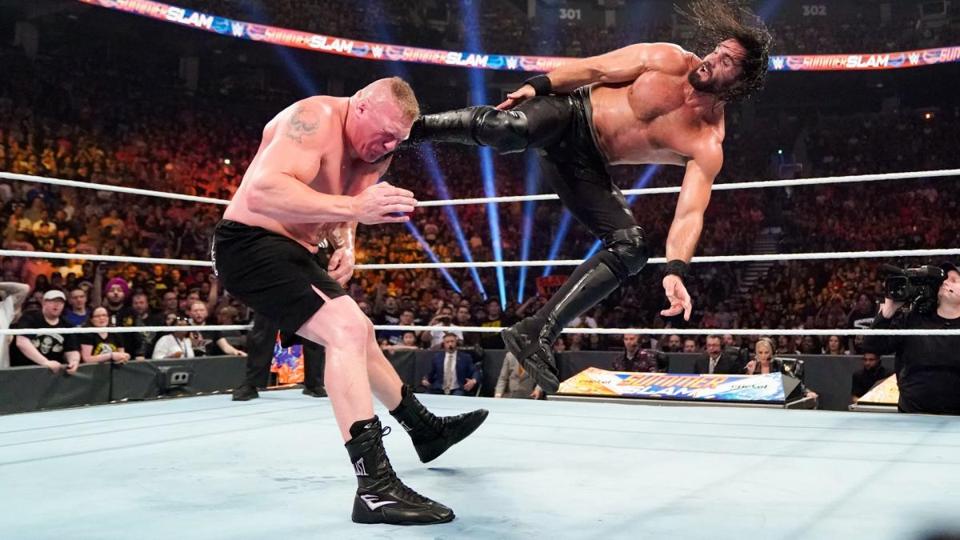 WWE is making a big change to its pay-per-views that is sure to make fans happy.

WWE could be making a huge change to its pay-per-views that is sure to make its fans happy.

“Part of why TLC didn’t have more matches was because WWE wanted to do a shorter PPV show, apparently in response to complaints about events running too long.”

It didn’t go unnoticed that WWE left AJ Styles vs. Randy Orton and Kevin Owens vs. Seth Rollins off the TLC pay-per-view when both matches had seemed like obvious candidates to serve as marquee bouts on the show, and that was apparently done by design in order to make TLC a more reasonable length. This year’s TLC pay-per-view lasted almost three hours and 12 minutes, a significant drop from the 2018 TLC PPV, which lasted nearly three hours and 57 minutes. In comparison to the 2018 Survivor Series event, the 2019 Survivor Series show was roughly 10 minutes shorter, with WWE reportedly choosing not to put the heavily built-up match between Rusev and Bobby Lashley on the card because the show was already “overloaded” with enough lengthy matches.

Going back even further, October’s Crown Jewel 2019 was slightly shorter (about 10 minutes) than the 2018 version while Hell in a Cell 2019 was roughly 24 minutes shorter than Hell in a Cell 2o18. In addition, SummerSlam 2018 lasted nearly four hours and two minutes, significantly longer than the 2019 pay-per-view, which spanned just three hours and 30 minutes. WWE has already clearly made a conscious effort to limit the lengths of pay-per-views, a necessity given that pay-per-views now typically have a one or two-hour pre-show while WWE continues to expand its major programming.

For fans who watch Raw, NXT and SmackDown, that’s a seven-hour weekly commitment, and if those fans also watch AEW, that’s nine hours a week dedicated to pro wrestling shows, or essentially, a full work day. Indeed, it can almost feel like a part-time job to watch the plethora of programming WWE has, especially during pay-per-view weeks. When SmackDown used to air on Tuesdays, WWE was asking its main roster fans to commit to a total of 10 hours—or significantly more for “Big Four” pay-per-views and WrestleMania—in a three-day span, and though it’s a little easier to take all that in now that SmackDown airs on Fridays, there is still this feeling among WWE’s fans that they are drowning in WWE content.

That’s been exemplified by Raw’s ratings tanking by 6% and SmackDown’s plummeting by 4% over the course of the past year, according to WWE’s Key Performance Indicators. What it all boils down to is viewership fatigue because it’s not like WWE programming is a Netflix series that you can binge watch in a week and then be done with. It’s a 52-week-a-year commitment that can be difficult to keep, especially when WWE’s product is struggling as it has in 2019 when it’s been defined by lackluster rivalries like Seth Rollins vs. Baron Corbin, Becky Lynch vs. Lacey Evans, Rollins vs. Wyatt or Corbin vs. Roman Reigns.

There is an old adage in pro wrestling that says, “We’re selling entertainment, not time.”

Over the past several years, however, WWE has been more focused on the time aspect of its programming, which has, in turn, hurt the quality of its product. Longer shows can be better if booked right and filled with high-quality matches, but that typically isn’t the case. That’s been made clear when fans turn on pay-per-view events not necessarily because the match is terrible or the superstars involved in it are uninteresting but because those bouts are taking place after they’ve already sat through four, five or six hours’ worth of matches.

WWE is trying to toe this delicate line between getting as many of its biggest stars as it can on each show but also not packing its events with so many matches that they become unbearably long. So, WWE fans aren’t wrong in complaining when tremendous talents like Shinsuke Nakamura, Mustafa Ali and a slew of others are consistently left off pay-per-views. But those same fans have to ask themselves: Is that worth an even longer pay-per-view when WWE’s events are already way too long?

Given the recent trend in the length of WWE PPVs, fans can expect shorter events moving forward, and while that may not be great for WWE’s stars, it is likely best for fan interest.

The Culture Of An Organization Defines Its Destiny

Building Tech Solutions And Giving Back