Breaking
How To Attract Candidates To Hard-To-Fill Positions
Trump: I’m ‘Ready’ To Take Action On Stimulus...
Apple iOS 13.6.1 Release: Should You Upgrade?
Here’s How To Stay One Step Ahead Of...
Microsoft Outlook Will Store Contacts’ Blood Group And...
How The US Department Of Health & Human...
Why Do Chinese Companies List Their Shares In...
Can You Get Covid-19 Coronavirus From Food? Frozen...
Winklevoss Twins Tell Bar Stool’s Dave Portnoy To...
How Democrats And Republicans Would Tackle The Enduring...
Berkshire Hathaway Doubles Down On Net Lease REIT,...
70% Of Americans: Ban Foreign Apps
This Week In Credit Card News: Pandemic Brings...
Three ‘Big Impact’ Surprises That Could Slam Stocks,...
Quantum Computing: What Does It Mean For AI...
5 Questions With Jonathan ‘Magar’ Martinez Cannabis Curing...
Home Business WWE Is Planning A Huge Match For John Cena At WrestleMania 36
Business 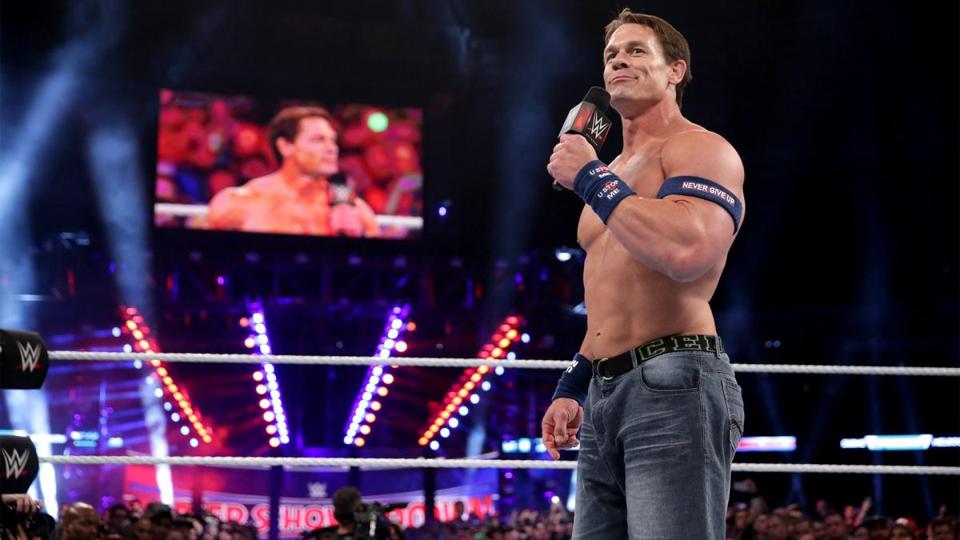 WWE star John Cena will reportedly have a major match at WrestleMania 36.

WWE is yet to decide on most of the top matches for WrestleMania 36, and it may have to make more room for another major star.

According to a recent report from WrestleVotes, much of the card for WWE’s flagship pay-per-view is still up in the air, but a new report suggests that one thing is for sure: John Cena will be on the show and is expected to wrestle an actual match. Paul Davis of WrestlingNews.co reports that there are “big plans” for Cena’s bout at the event:

“I asked a WWE source about Cena and I was told that there are big plans in the works for him but nothing has been locked in yet…The word from people in WWE is that Cena will likely be wrestling on the show.”

Cena’s limited role over the past couple of years hasn’t been much of a surprise. In October 2018, Cena—in reference to WWE’s notoriously difficult workload—said that his “body just can’t handle the schedule anymore,” which explains why he’s wrestled so infrequently since 2018. According to CageMatch.net, Cena wrestled just eight matches in 2019, the fewest he’s ever had in a single calendar year since his debut in 2002, while 2019 was also the first time in his career that he failed to wrestle a pay-per-view match. WWE obviously missed him, too.

On the heels of WWE’s disappointing Q1 2019 earnings, Vince McMahon put most of the blame for WWE’s declining business on “superstar absences,” a clear reference to Cena, who has all but disappeared from WWE programming in recent years. Cena has largely appeared only at special house shows (like at Madison Square Garden, for example) and at overseas special events (Super Showdown, etc.), and the last time he had what most would consider a major rivalry was way back in late 2017 when he faced Roman Reigns for the first time ever at No Mercy. During the past several years, WWE has blown through a number of Cena dream matches without a whole lot of build, including bouts against Shinsuke Nakamura, Braun Strowman and Finn Balor, as it seems the company has been trying to fit in as many dream matches as it can before Cena bolts the company for good.

Cena, after all, has had one foot out the door of WWE as he’s become one of the most sought after stars in Hollywood. But he hasn’t forgotten about his WWE roots, either. In addition to hinting that he’ll be at WrestleMania 36, “The Champ” recently told Belfast Telegraph (h/t WrestlingNews.co) the following about his relationship with WWE and its fans:

“I hope they always view me as a member of the WWE, because I am. Whether it’s watching the events or being able to participate, any chance I’m given to answer this question, WWE is my family. It’s weird that the culture is, you either do this or you do that, and for 20 years I’ve been trying to tell people, ‘No, it’s all really cool.’ So I don’t ever want to not be known as a WWE superstar.”

Much like Dwayne “The Rock” Johnson before him, Cena has entered that territory where perhaps just as many—if not more—people recognize him as an actor rather than a WWE superstar, but Cena’s importance to WWE can’t be overstated. It’s no coincidence that interest in WWE across a number of important metrics, including live event attendance and TV ratings, has declined over the past year when Cena hasn’t been around. In early 2017, Cena was seen as the biggest reason why SmackDown accomplished a then-rare feat by outdrawing Raw in terms of average live event attendance, and it goes without saying that most of today’s current crop of WWE stars don’t even approach Cena in terms of overall star power.

Although WWE fans have a notorious love/hate relationship with part-time stars, Cena has become so well-respected that he would likely be welcomed back with open arms for any sort of marquee match at WrestleMania 36, which could be without major names like Undertaker and Ronda Rousey this year. There is certainly no shortage of opponents waiting in the wings for Cena, either. He could very well pursue his 17th world title—which means he could face Bray Wyatt, Brock Lesnar or even Adam Cole—while a long list of names that includes stars like Samoa Joe and Velveteen Dream would make potentially great opponents for him as well.

WWE doesn’t necessarily need Cena per se, but it certainly couldn’t hurt to have a star of his magnitude at the company’s biggest pay-per-view of the year, especially if the bout is big enough for Cena to bring back old fans and draw in new ones as well.

Time To Sing A Different Tune? Why Clean Energy Entrepreneurs Might Embrace Climate Impacts In Their Sales Pitches