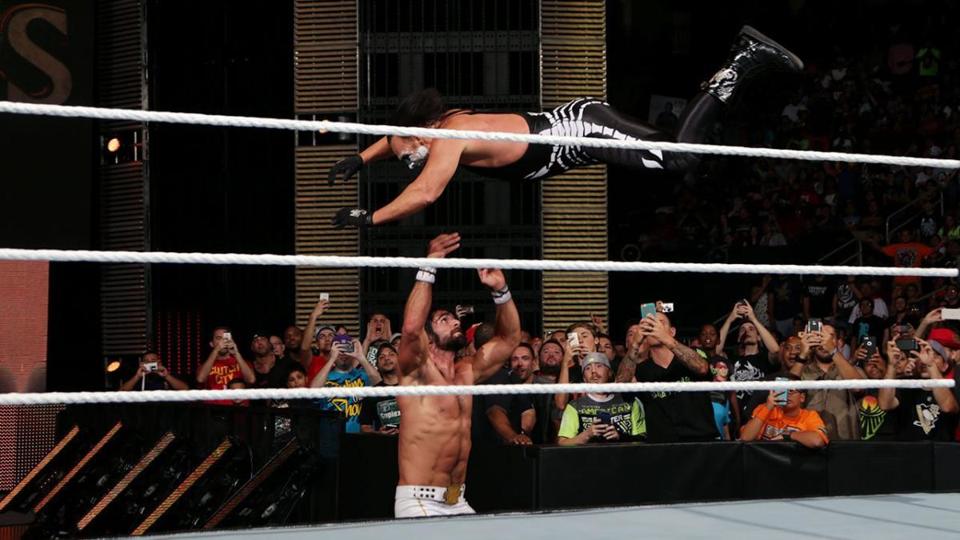 WWE is reportedly considering bringing back a huge legend for a match at Super Showdown in Saudi … [+] Arabia.

WWE may be bringing back a legend whose career was thought to be over for a blockbuster match later this month.

According to PWInsider.com (h/t Cageside Seats), WCW icon Sting could be coming out of retirement in Saudi Arabia:

“PW Insider’s heard talk Sting could return for a match at Super ShowDown in Saudi Arabia next month.”

Sting last wrestled in September 2015 at Hell in a Cell, where he unsuccessfully challenged Seth Rollins for the WWE Championship. It was during that match that Sting suffered a serious neck injury after an errant “buckle bomb” by Rollins, a move that many believed to be a career-ender for “The Icon.” By March 2016, Sting had reportedly developed cervical spinal stenosis and was forced into retirement. Sting would go on to be inducted into the Hall of Fame that year, and he told Sports Illustrated (h/t Sportskeeda) that he ultimately made the decision to officially call it quits on the night of his induction.

The injury to Sting, who was 56 years old at the time of his match with Rollins, raised serious questions about whether WWE should continue to put part-time stars of advanced age in the ring. The company has ultimately continued to use older veterans like The Undertaker, Goldberg, Triple H and Shane McMahon on a limited basis, however, and that’s apparently reopened the door for Sting to step back into the ring one last time. Once synonymous with WCW, Sting has long been linked to a potential WWE dream match with The Undertaker, and he told Sports Illustrated just last month that a singles match against Taker would be the one bout that could coax him out of retirement, though he admitted that the match is unlikely:

“If there was a ’Taker situation at WrestleMania, I would listen to that phone call. I could get in condition and I could pull it off…I think my career is done. I still think about the ‘Taker situation every year, but I don’t think it’s going to happen.”

Indeed, Sting’s potential return reportedly would not include a match with The Undertaker even though there have been rumblings that “The Deadman” could be returning to in-ring action in the near future, likely for a match at Super Showdown but possibly for one at WrestleMania 36 as well. What storyline that would leave for Sting is anyone’s guess as there aren’t a ton of obvious opponents lined up for him if he’s not going to face Taker. Perhaps a bout with another unique performer in “The Fiend” Bray Wyatt would be considered, but beyond that, there really isn’t a whole lot of intrigue surrounding a potential coming-out-of-retirement match for the now 60-year-old Sting.

That certainly doesn’t mean it won’t happen, though.

WWE, of course, has been loading up its Saudi Arabian special events with a number of major part-time stars, ranging from Goldberg to The Undertaker to Tyson Fury to Cain Velasquez. Chris Jericho has said that he made a whopping $100,000 for an incredibly brief performance in the 2018 Greatest Royal Rumble in Saudi Arabia while WWE has reportedly been handing out million dollar-plus paydays to stars like Taker, Goldberg and Shawn Michaels for their one-off matches at the special overseas events. More recently, Edge came out of retirement after nine years out of the ring and has signed a three-year deal for a staggering $3 million per year, a favorable contract that likely makes him one of the highest paid stars in all of WWE.

What’s that mean for Sting? Well, he certainly might have a massive payday waiting for him if and when he can get cleared to wrestle one last time.

While that may seem like a long shot, WWE’s once hard stance on choosing not to clear wrestlers with major injuries to wrestle again seems to have changed over the past year or two. Edge, Daniel Bryan and Sheamus are the biggest names to defy the odds and return from what were thought to be career-ending injuries while names like Jason Jordan and Paige, who have been in similar positions, may be working toward making an improbable comeback as well. That’s certainly a marked change from previous years and one that opens the door for Sting to wrestle one last match, no matter how unlikely that may seem.

Saudi Arabian officials have a well-known love for nostalgia and past-their-prime superstars, which explains why WWE chose to main event Super Showdown 2019 with a match between Goldberg and The Undertaker that turned out to be an absolute disaster. Despite the poor performance of both stars during that match, that hasn’t prevented WWE from continuing to rely heavily on part-time stars whose best days are clearly behind them, and it very well may have opened the door for one last marquee match for Sting.

Even if the WWE Hall of Famer doesn’t get the dream match with Undertaker that he desperately wants, that doesn’t mean he won’t be lacing up the boots one last time in just a few weeks.

HBO’s ‘The Outsider’ Sunday Episode Is Live Now, Thanks To The Super Bowl

The Top 10 Immersive Developments of 2019

The Knicks Have Strong Interest In Villanova Coach...