Breaking
Behind The Curtain—Chapter 11 From The Inside—Chapter 10—The...
Three Classic Ways To Get New Business
With Hope, Perseverance And Faith, Two Friends Are...
Exxon Mobil Shares Cross 10% Yield Mark
T-Mobile for Business BrandVoice: From Sci-Fi To Everyday...
How To Move Your Career Forward By Making...
A Conversation With Jill Houghton, President And CEO...
VW’s Electric ID.4 Lands In Q1 2021 With...
Would Biden Enact Broad Student Loan Forgiveness? These...
Why You Must Slay Your Mindset And Stop...
Surviving The Pandemic With Your Culture Intact: How...
The Disruption Of The Consulting Industry Is Here
Remote 101: How To Create Meaningful Connections For...
How To Reassess Your Finances To Align Your...
7 Things Every Entrepreneur Should Automate
Volkswagen’s Truck Unit Ties Up With TuSimple On...
Home Business WWE May Move On Without Two Huge Stars After WrestleMania 36
Business

WWE May Move On Without Two Huge Stars After WrestleMania 36 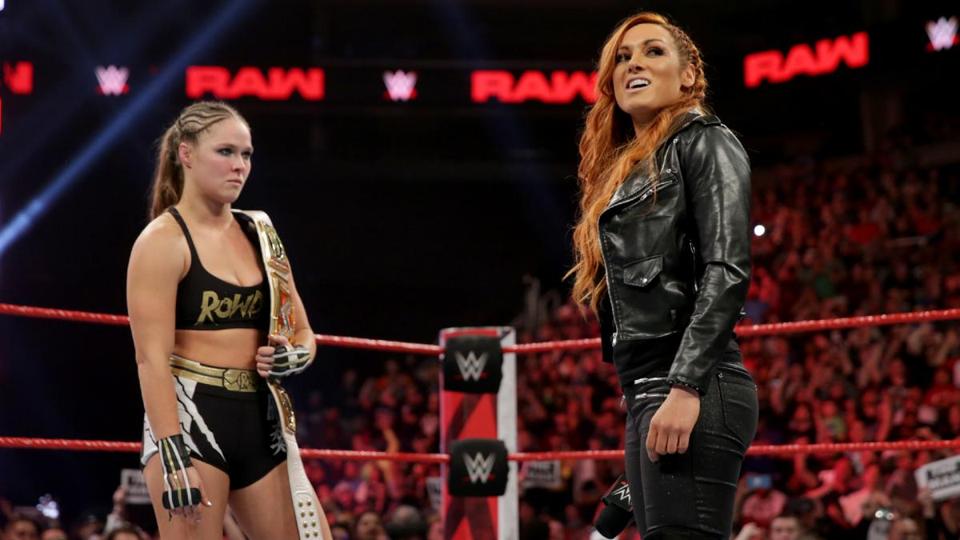 WWE may be forced to move forward without two of its biggest stars following WrestleMania 36.

WWE has a star power problem, and soon, it may get even worse.

One of the biggest issues currently plaguing WWE is its clear lack of larger-than-life superstars, something that Vince McMahon even blamed WWE’s disappointing earnings on last year. The company’s inability to create the “next” John Cena, Hulk Hogan or “Stone Cold” Steve Austin has limited its opportunity for growth and its ability to become a bigger pop culture phenomenon, and now, serious questions remain about the future of one of its biggest stars.

In a recent interview with People, former Raw Women’s Champion Ronda Rousey indicated that she may not be returning to WWE anytime soon, if at all:

“I think I need to figure out a different way of doing it. To be able to not have to choose career over family or family over career and kind of find that happy medium. Right now, I think my family needs my undivided attention. I’m happy to give them that. But I’m trying to figure out a way or a system or somehow that I could give both my family and WWE the best of me.”

Rousey added that she is in “no rush” to return to the squared circle, noting that the women’s division is in good hands and doesn’t need her at the moment:

“I really don’t think that I’m that necessary in what’s going on. I think they’re crushing it and I really did want to bring a spotlight to what they’re doing and let them stand in it. And I think it’s kind of better, they’re better off with me taking a step away right now, and kind of finding their stride without me.”

WWE officials think quite highly of Rousey, viewing her as a major draw and top star on the same level as stars like Cena and Brock Lesnar. While there hasn’t been a whole lot of evidence to suggest that Rousey is the blockbuster ratings draw WWE wants her to be (quite the opposite, in fact), there’s no denying that she is a main event caliber in-ring performer who has a rare aura that only a handful of stars possess.

The widespread expectation has been that WWE will welcome back Rousey with open arms whenever she’s ready. Triple H recently said that Rousey “will be back” while Stephanie McMahon said that—though she wasn’t sure when—Rousey will “definitely be back,” and with her contract not expiring until 2021, her return has been expected for several months now. Up until this point, however, it hasn’t happened even though the finish of Rousey’s historic WrestleMania 35 main event match against Becky Lynch and Charlotte Flair laid the foundation for a major singles rematch with “The Man.” In fact, WWE had at one point “tentatively” planned Lynch vs. Rousey for WrestleMania 36, but Rousey’s latest comments—in which she says she wants to return but won’t do it “full time”—aren’t the only sign that she might not be coming back in the near future or even at all.

In route to Survivor Series, WWE clearly planted the seeds for a WrestleMania match between Lynch and NXT’s Shayna Baszler, who is reportedly badly wanted on the main roster and only remained in NXT for so long because of the yellow brand’s new TV deal with USA Network. It didn’t go unnoticed, though, that Baszler pinned Bayley instead of Lynch in that Survivor Series main event, a move meant to lay the groundwork for a potentially huge singles match between Lynch and Baszler, which is indeed the backup plan now that Rousey apparently will not return to WWE in time for WrestleMania season.

Early betting odds had positioned Rousey as the odds-on favorite to win the 2020 women’s Royal Rumble match (a spot that ultimately went to Baszler), and with Lynch currently holding the Raw Women’s Championship, having Rousey enter the match as a surprise entrant and go on to win it would certainly have been a logical outcome. As Rousey noted, however, the women’s division is “finding their stride” without her, and though the creative team hasn’t exactly done a great job of booking WWE’s female stars since WrestleMania 35, the division certainly is deep and talented enough to thrive without Rousey, given a better effort from creative. SmackDown, of course, has a number of strong or improving performers it’s building around, including Bayley, Sasha Banks, Lacey Evans and Alexa Bliss, while Raw has WWE’s top two female performers in Lynch and Flair as well as stars like Asuka, Kairi Sane, Ruby Riott and Liv Morgan, who all could be much bigger stars with the right booking.

The main reason why WWE feels like it must rely so heavily on Rousey—who WWE really wanted for WrestleMania 36—is because using an established star like her is a lot easier than creating new stars by telling compelling and engaging storylines. Given Rousey’s comments about her future and her desire to focus on starting a family, she may have forced WWE’s hand so that the company must look elsewhere not only for its next big women’s division feud but for the next major star who can carry the load at the top of the card if Rousey’s familial priorities make her unable to wrestle.

Over the past several months, you can tell that WWE’s women’s division has been in a holding pattern due to uncertainty about Rousey’s future, but Baszler’s recently-ignited WrestleMania feud with Lynch and Rousey’s failure to appear at marquee pay-per-views that provided the perfect stage for her return suggest that Rousey is far from a lock to wrestle again anytime soon.

And if that’s the case, WWE needs to prepare for life without her and build up new female stars in her absence, especially with Lynch also expected to miss significant time following WrestleMania 36. That’s when Lynch and Seth Rollins will reportedly be taking a lengthy hiatus from WWE programming, which means both that Baszler is the clear favorite to beat “The Man” at Mania and that WWE’s women’s division will—barring something unforeseen happening—be forced to move forward without arguably its top two stars in Rousey and Lynch following its flagship pay-per-view.

With that in mind, WWE is clearly putting a renewed focus on its women’s division, which may have as many as six matches at WrestleMania 36, and it is making an effort to reignite pushes for stars like Rhea Ripley, Evans, Carmella and Naomi. But it will be a real challenge for the creative team to create compelling storylines if and when both Rousey and Lynch are gone for the foreseeable future.

Is WWE up to the task?

How To Get On Shark Tank: Two Young Entrepreneurs Share Their Secrets Before This Week’s Show